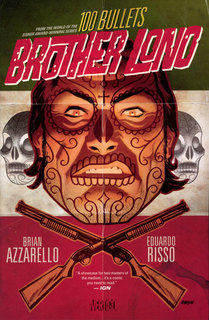 The epic series conclusion in 100 Bullets #100 left few possibilities for sequels or spin-offs, as most of the major characters were dead. When we last saw Lono he was shot in the chest and fell through a second-story window into a moat below. Looked pretty fatal, but we all know that Lono is an extremely tough guy, and it turns out that he made his way to the confessional in a church outside Durango, Mexico.

That important piece of back story doesn't get told until the second issue. As the miniseries opens it's four years later, and members of a Mexican drug cartel are torturing a man to get information about his American buyers. One of the torturers is local drug lord Cortez. Shortly afterwards he meets Father Perez in church and gives him an offering from the drug syndicate Las Torres Gemelas, so we are introduced to the local dynamic. Lono is in a jail cell--apparently voluntarily--and is sent to the bus station to meet Sister June and escort her to the church and orphanage. He introduces himself as Brother Lono, and the main cast is in place.

Everyone who meets Lono can tell there's darkness in his depths. As readers we already know this, so his big character arc is predictable: what will it take to break through his self-imposed equanimity and release the most murderous member of the Minutemen? Of course there is a lot more going on. The main plot driver is the drug cartel's drive to expand its territory. This makes the church's undeveloped land a prime target. At the same time the DEA is looking for a way to get inside the operation. Lono is not the only player with a secret.

100 Bullets is frequently described as "crime noir," and this installment certainly brings the noir. Bad things happen to bad people...but they also happen to a lot of good people as well. Azzarello and Risso make good use of the rural Mexican setting, which gives the story a different flavor. Azzarello was insistent that this should be called a spin-off rather than a sequel, which is a fair distinction. Lono is the only character from the original series, and no reference is made to the Trust or the conspiracy underlying the series. But revenge is certainly a common element. Brother Lono doesn't require detailed knowledge of 100 Bullets, but it's hardly free-standing, since the whole story assumes familiarity with Lono as a character with a history. If you enjoyed 100 Bullets I highly recommend it, even if Lono wasn't one of your favorite characters. He wasn't one of my favorites, but this series completely won me over.

I loved 100 Bullets, but somehow, I didn't take to this one. The whole business of Lono leaving all that happened in 100 Bullets behind, hanging out in a church as a sort-of handyman seeking redemption, seemed unoriginal, especially as the depredations of the drug cartel would unravel his hard-won serenity.

Brian Azzarello is right that this is more spinoff than sequel. As Lono is the only one from the previous series, if you haven't read it you don't know how bad he can be ... but if you have, then you'll be afraid for the ones who pushed him too far.

I agree that it's not the most original setup, but I liked the way it was handled. I didn't have any trouble with Lono walking away. He arrived at the church nearly dead, and wracked with guilt over everything he'd done for the Trust, so a major change of heart (or at least an attempt) is believable.

As I mentioned above, I thought Lono's time-bomb status was ticking away behind everything that happened. I liked the way the story took its time getting there. It probably could have been done in an issue or two less, but I was enjoying the ride so much that I didn't mind.

See I thought the series was about twice as long as it should have been. Overall, I was disappointed in this book. It seemed very by the numbers.

I thought I remembered you saying something about that while it was monthly. There's definitely a different sense of pacing when you're reading monthly issues. But I don't see how the story could have worked the same in only four issues. Then it really would be by the numbers: there would be little time to build up the mystery around everyone's secrets. For one example, the DEA agent's identity isn't revealed until the end of the fourth issue. Doing that at the end of the second issue would be awfully soon after introducing the character.

I think it could have worked as a shorter series, Azzarello himself proved he was capable of such in the 100 Bullets series itself. Then again if it was 4 issues I probably would have complained it should have been longer.