20 Fun Facts to Know and Tell About Shazam!

Are you worried that when “Shazam!” comes out April 5 that you won’t be conversational about him? Take heart! Here are 20 Fun Facts to Know and Tell About Shazam:

1. As the Internet keeps reminding us, Shazam was called Captain Marvel when he debuted in late 1939. The star of Marvel’s Captain Marvel movie is the ninth comic book character to use that handle.

2. The reason there have been so many Captain Marvels is that the original was sued out of business by Superman. Seriously, when Fawcett Comics debuted their dark-haired, flying strongman with a reporter as his alter ego, the company that owned the Man of Steel (now known as DC Comics) filed a copyright-infringement lawsuit. The court case dragged on until the early ‘50s when Fawcett – no longer finding comics very profitable and on the wrong end of a number of judgments – threw in the towel. Not only did they stop publishing Captain Marvel, but they gave up on comic books altogether.

3. The original Captain Marvel had a variety of nicknames in the ‘40s, including “The World’s Mightiest Mortal” and “The Big Red Cheese.” Reprints of Shazam’s adventures in the 1940s as Captain Marvel are hard to come by, but well worth the hunt.

4. Billy Batson was and is the character’s alter ego, a tweenage orphan who was judged by the 3,000-year-old wizard Shazam to be worthy of being his champion. Billy could call down magic lightning (“BOOM!”) to transform him into the adult, super-powered Captain Marvel by saying the wizard’s name. In his first story, he also became a roving radio reporter for station WHIZ.

5. If you think it’s ridiculous that anyone would hire a 10- to 12-year-old boy as a radio reporter, keep in mind that Billy’s best friend was Tawky Tawny, an intelligent, talking tiger who walked on his hind legs and was a bit of a dandy.

7. According to artist C.C. Beck, the model he used for the original Captain Marvel’s face was actor Fred MacMurray (My Three Sons).

8. One of the original Captain Marvel’s greatest achievements was “The Monster Society of Evil” (1943), a long-running serial in an era of self-contained stories, and featuring the first supervillain team in comics. DC has so far shied away from reprinting it, fearing reaction from some truly egregious racial caricatures found therein.

10. A lot of people assert that Captain Marvel outsold Superman in the early ‘40s. It is very likely true, although sales numbers from that era remain a bit slippery.

11. Most people are aware by now that “SHAZAM” is an acronym, standing for the gods and heroes from whom our hero derives his powers: Solomon (wisdom of), Hercules (strength of), Atlas (stamina of), Zeus (power of), Achilles (courage of) and Mercury (speed of). Less well known is SHAZOOM, the magic word of Captain Marbles, who battled Superduperman in the pages of a MAD magazine story in 1953, a parody of the Captain Marvel/Superman court fight. SHAZOOM stood for Strength, Health, Aptitude, Zeal, Ox (power of), Ox (power of another) and Money. It’s not important, I guess, but that 66-year-old joke still cracks me up.

12. It bothers some people that Solomon is included in the magic word, when he’s a biblical character and not a mythological one. But Solomon appears in a number of ancient, non-biblical sources, too. Moreover, in the comics themselves he would appear as some sort of demigod on Mt. Olympus, rubbing shoulders with Hercules and the like. I mean, seriously, we’re talking about a comic book world where a boy can turn into a Fred MacMurray cosplayer by saying a magic word, so don’t let that one technicality bug you. 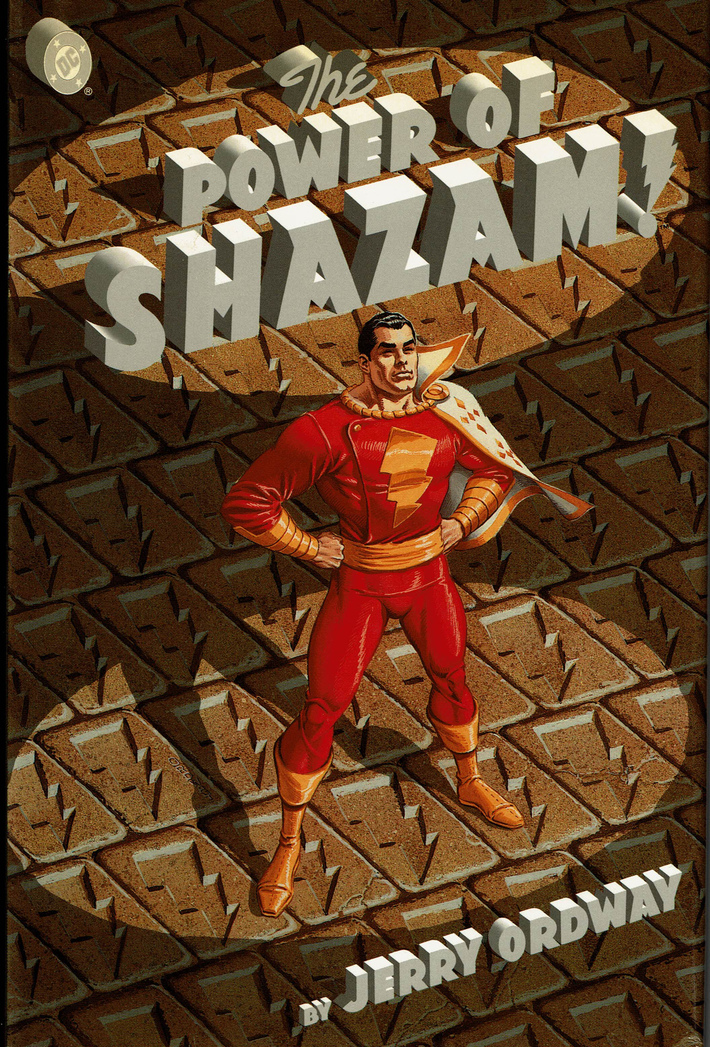 Jerry Ordway’s Power of Shazam! reboot in the 1990s began as a graphic novel before segueing into a comic book series.

14. While Billy Batson became an adult when uttering his magic word, Mary and Freddy did not. The decision to keep their true ages after the magic lightning was made to distinguish them from the big guy. Also, Mary wore a skirt and Junior wore blue.

16. The original Captain Marvel’s archenemy was Dr. Thaddeus Bodog Sivana, who, like Lex Luthor, was a bald mad scientist. Just as Captain Marvel was often aided by Mary Marvel and Captain Marvel Jr., “The World’s Wickedest Scientist” was often abetted by two of his adult children, Georgia and Thaddeus Sivana Jr. The current Shazam! series has top-flight talent in the form of writer Geoff Johns and artist Dale Eaglesham.

18. The UK had its own version of the original Captain Marvel in the 1950s. L. Miller & Sons had been reprinting Fawcett’s Captain Marvel material overseas when it got a cease-and-desist from DC after it won the court battle. Instead of quitting, it made its own version, where a young reporter named Michael Moran could transform into the atomic-powered Marvelman by saying the magic word “Kimota” (“atomic” backwards, sort of).

19. Marvelman was revived in the 1980s with writer Alan Moore (Watchmen, V for Vendetta), in a disturbing, subversive take on the concept. When it was reprinted by Eclipse Comics in the U.S., the name was changed to Miracleman to avoid problems with Marvel. Ironically, Marvel later bought the rights, and is reprinting the book as Miracleman, although obviously it could call him Marvelman if it wanted to.

20. The current version of the “Marvel Family” is called the Shazam Family. It consists of Billy Batson and five other children he lives with in a foster home (including remodeled versions of Mary and Freddy). All six can become super-powered adults by saying “Shazam.”

In the Golden Age, I believe the "Big Red Cheese" nickname was used only by Sivana and, maybe, his family.

Yes. Yes I did. I very much did. He stole the word!

RE the copyright infringement lawsuit between National Comics and Fawcett, I know there are surface similarities between Superman and Captain Marvel: They are both flying costumed superpowered heroes, both dark-haired men, both journalists in their secret identities.

Then there's the surface similarity of the cover of Action Comics #1, showing Superman lifting a car over his head and smashing into a cliff wall, and the cover of WHIZ Comics #2, showing Captain Marvel tossing a car into a wall.