Permalink Reply by Jason Marconnet (Pint sized mod) on August 26, 2015 at 7:13pm
So the only hipsters drink PBR may be a myth. I frequent a local pizza joint that has a very good beer selection. They even have four or five taps of their own brew. Anyways there's a gentleman that comes in often. His daughter works at the place. He always orders a PBR tall boy. He is probably late 40s early 50s.

I've been known to throw back a PBR. Several places in town will have specials on PNR on certain days. If I'm feeling thrifty I may partake...

Permalink Reply by Jason Marconnet (Pint sized mod) on August 27, 2015 at 9:43pm
I'm in the process of packing. I'm drinking a miller lite tall boy. I know I know.

I had a Budweiser at a baseball game a few weeks ago because it was convenient. Wow. Hard to believe I used to drink that stuff regularly,.

A bar close to my old apartment sells $1 domestic drafts during Texas Ranger games, and for a buck I can drink Miller Lite. The other choices are Bud Light and Coors Light

I'm in the process of packing. I'm drinking a miller lite tall boy. I know I know.

Hm. Dollar beer. That makes up for a host of sins.

My wife used to make fun of me when I'd bring home a case of something like Keystone -- which would cost less than a six-pack of most beers. Sometimes what you're looking for is volume!

Currently drinking a Citra Sunshine Slacker from Evil Twin Brewing. It's a pale ale. Not to bad, a little dry. It has a picture of the Dude on it, so that's something. 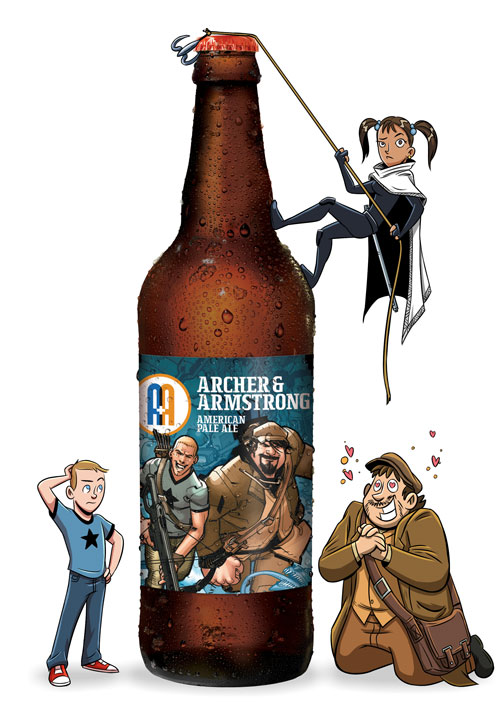 Valiant Entertainment and Chicago's own Arcade Brewery are proud to announce a first-of-its-kind collaboration for Archer & Armstrong American Pale Ale – a refreshing craft APA set to debut this March during C2E2 2016! Just as Valiant's award-winning adventurers prepare to mount a star-studded return with an all-new ongoing series in A&A: THE ADVENTURES OF ARCHER & ARMSTRONG #1 this March, Valiant and Arcade are gearing up to unveil a delectable new libation inspired by comics' premier pair of history-shattering heroes and their upcoming journey into the infinite reaches of Armstrong's bottomless satchel!

One's an immortal libertine with a lust for the finer things, the other is a teetotaling ex-assassin with a heart of gold…and now Arcade is perfectly embodying their dysfunctional partnership with a medium-bodied ale like no other! Hopped with Columbus, Chinook, Palisade, Cascade and Mandarina, Archer & Armstrong American Pale Ale builds on a light malt profile to create a complex and wonderful citrus/tangerine character. Clocking in at 7.0% alcohol by volume, Arcade's first Valiant-inspired ale has all the fight of a long night out with Armstrong…but is slightly sweet enough to keep Archer in the game too!

Co-sponsored by Valiant Entertainment, Arcade Brewery, Threadless, and non-profit Hope for the Day, the first 200 party-goers will receive a strictly limited A&A: THE ADVENTURES OF ARCHER & ARMSTRONG #1 ARCADE BREWERY VARIANT by artist Jay Fabares and get the chance to have it signed on-site by writer Rafer Roberts! Each attendee will also be entered in a door-prize drawing for a bottomless satchel full of A&A treasures galore, including a complete set of Archer & Armstrong trade paperbacks, a one-of-a-kind sketch cover by A&A’s own Rafer Roberts, official Archer & Armstrong swag, and much more!

Portions of the proceeds from the night will be donated to Hope for the Day supporting their suicide prevention outreach and mental health education projects. RSVP online at Facebook or Eventbrite.

Following in the footsteps of Arcade’s past comics-inspired collaborations with some of the industry’s most popular and well-respected creators, including Jason Aaron, Darwyn Cooke, Tony Moore, Jimmy Palmiotti, and more, Archer & Armstrong American Pale Ale is a limited release and will be available in Chicago area bottle shops. See a map of locations at ArcadeBrewery.com/Beers or buy online at West Lakeview Liquors, The Beer Temple, and Binny’s Beverage Depot.

Then, jump into the adventures of Valiant’s (somewhat) dynamic duo with an all-out assault on the senses in A&A: THE ADVENTURES OF ARCHER & ARMSTRONG #1 – the FIRST ISSUE of Valiant’s next flagship series from red-hot rising star Rafer Roberts and superstar artist David Lafuente! The debut story arc – “IN THE BAG” – starts here on March 16th as Archer descends into the infinite depths of his partner’s bottomless satchel to rescue Armstrong from an age-old enemy…and battles his way through an upside-down world of arcane architecture, lost treasures, and strange creatures bent on making our world their own!

MEET ARMSTRONG: Since the ancient city of Ur, this immortal adventurer has spent the last 7,000 years drinking and carousing his way through history alongside some of the greatest merrymakers the world has ever known.

MEET ARCHER: A sheltered teenage martial arts master and expert marksman who was raised for a single purpose – to kill the devil incarnate. Little did he know that this undying evil was actually Armstrong (he’s actually a pretty good guy…once you get to know him) and, since hitting the road together, these two have become great friends and even better partners.

NOW: Archer is about to set off on his most dangerous mission yet – a quest into the mystic reaches of Armstrong’s bottomless satchel to liberate his friend and comrade from the clutches of the mad god Bacchus! Imprisoned in Armstrong’s satchel for centuries, Bacchus now commands a legion of monsters, goblins and golems bent on escaping back into the world of man and enacting revenge on their captor… Can Archer single-handedly combat the godly embodiment of intoxication himself – and rescue his best buddy – without becoming lost amongst Armstrong’s endless repository of bizarre artifacts and historical oddities in the process?

I read a comic this morning that is based around a local beer company. 3 Floyds, a brewery just south of Chicago here in Indiana, is well known in these parts. I've been to the 3 Floyds brewery a few times. It is in a part of town that looks like a place where mobsters might drag you out to kill you, or take care of your corpse. That's exactly what you would want it to be if you've ever seen some of their beer labels. With beer names like War Mullet, Space Station Middle Finger, Dark Lord de Muerte, BA Blot Out the Sun, Arctic Panzer Wolf, Zombie Dust (personal fave), Behemoth, and Dreadnaught, it wouldn't surprise you that the theme of their restaurant is heavy metal, and the times I've been there, they have had horror movies playing on the TV screens. The food is exquisite. They don't take reservations, and we have waited an hour and a half to two hours to get in on a Sunday night.

Just based on their beer labels, I would have said long ago that Bisley would be the ideal artist on this book, and I'm a huge Brian Azzarello mark.

This issue was pretty much a straight-up horror freakshow like you would guess. The cover has a monstrous samurai warrior beheading a viking-looking guy. The story is every kind of depraved you could imagine. Definitely NSFW. I'm not really sure I can remove myself personally from how the story is, because it was just fun for me to read a comic about a guy who has a home brewery in Indiana and gets transported to another dimension where everyone in his neighborhood is a monster and he has to slice his way through them. Even his cat gets decapitated and is brought back as some kind of cat demon.

This book is pretty much the absolute opposite of my personality, which may be why it feels like hanging out with one of your wild friends for one issue. You have to admit that they're a lot of fun, even if you wouldn't want to hang out with them exclusively.

I listed the book in the Guide, and wondered if the beer was any good.