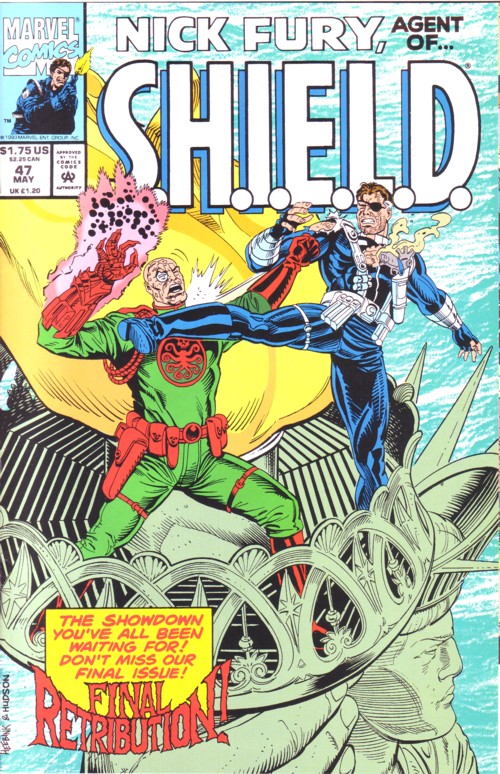 Nick and other agents of SHIELD are fighting Hyrda in the mutant Gideon's (remember him?) office. During this battle Baron von Strucker flies a Hydra craft to the UN building and blows it up. The Baron laments that he wished the building was occupied when he attacked, so he could kill some people. Um, you know he was the once who decided when to attack. He could have attacked the next day any time he wanted to.

The next morning President Clinton is giving Nick a lot of grief over what happend. Fury rebuffs him telling Clinton he has no power over him or SHIELD. The Secretary-General Boutros-Ghali lets Nick know that he and SHIELD have to stop von Strucker and Hydra otherwise they will have to revoke SHIELD's charter.

Baron von Strucker sends word to SHIELD that he wants to have a chat alone with Fury. The meeting takes place at the Statue of Liberty. Neither one of them shows up alone. The Baron escapes and manages to capture some agents including Contessa Valentina and Kate (who Nick is supposed to be in love with).

Well Nick and SHIELD track down Baron and Hydra to their base, with the Baron vowing to kill the woman Nick loves. While making their way though the base, Nick spies Kate in an iron maiden. It snaps shut killing her. Nick flashes anger for a panel and then he and everyone else moves on. Never mentioning her or grieving for her the rest of the book. I was more upset when I ate my last cherry sour.

A bit later we get to the big showdown between Nick Fury and Baron von Strucker. This is a really good fight scene between the two of the. With some help from Val, who the Baron was holding onto personally to further upset Nick. Von Strucker “dies” again, and that concludes this series.

I'm not the biggest Nick Fury fan, but I had this plus a few other issues I read, and they were all pretty decent. The art was kind of weird. In some places it reminded me of Sean Phillips. Other times more cartoony.