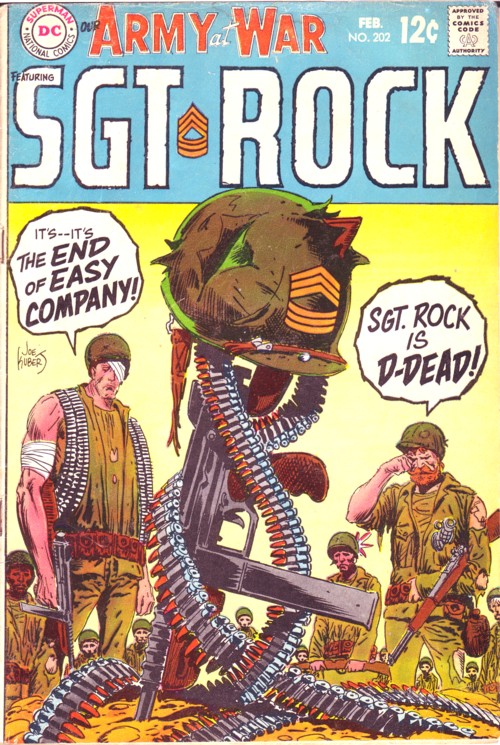 Story: The Sarge is Dead!

Sergeant Rock seemingly dies while protecting the rest of Easy Company from Nazis during their invasion of the Italian Alps. This leaves Bulldozer in charge of Easy. Yet, he and the others still feel as if Rock is watching over them.

That night “something” wakes Dozer up when more Nazis are sneaking up on them. He quietly awakens the rest of the troops, and they kill the Germans. Later they spot an enemy encampment, and charge them. The Germans who don't die attempt to flee across a a not quite solid frozen lake. The ones who don't drown, Easy takes as prisoners.

Easy Company then makes there way back to HQ. Once there the CO commends them on a job well done, and tells them to take their wounded to the infirmary. Unfortunately, my comic is missing the last page of this story. I assume this is where they learn that Rock is still alive.

So heading into the next story:

This is actually a reprint from OAW #29.

We begin before the war and check in on the life of Mickey Williams. He works as an elevator operator by day, and hates being in such an enclosed place. We see him thinking how they are packed in like sardines as he rides the subway. At home he lives in a small, cramped apartment.

Of course this means once he is drafted he is part of a tank crew. Man, does he bemoan his fate. Telling his mates that he wanted to do anything but be in a tank! They get into some fights and seem to be dead and each time he mentions that if he was infantry he would have the freedom to seek shelter, and not be trapped all of the time.

Later he gets his wish and goes scouting about to see if he can see any more of the enemy, Naturally, he gets caught out in the open, and has to dive into a trench. He never sees what is shooting at him, and just throws a grenade in desperation. It somehow hits the enemy, and he makes a beeline back to the tank, saying he is glad to be back in its confines. His friends give him grief about it.

Losing that last page of the Sergeant Rock story hurt it for me. Still very good, especially the Joe Kubert art. I liked the humor in the second story, a nice change of pace.

Being the Sgt. Rock devotee that I am, I'm sure I have that issue, and I'm sure I've read that story ... but I'm not certain how it ends. I half-remember that Rock just got lost in the confusion of the battle and wandered off.

According to GCD, "The Sarge in Dead" was reprinted in Showcase Presents: Sgt. Rock Volume #4. Maybe someone on the Round Table can find it and tell us the ending.

DC Indexes has a synopsis here. If the link doesn't work, it says "When they return to base, Easy reports that Rock was killed. They are shocked to find him alive in the infirmary . He was partially buried in the rubble and found by another unit."