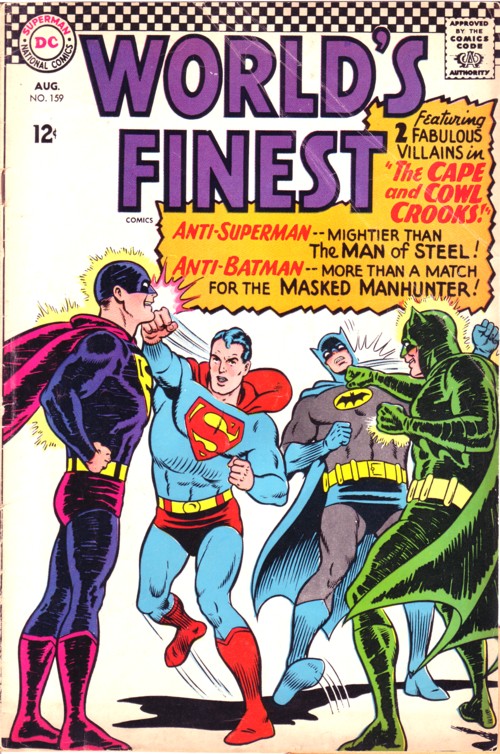 Story: The Cape and Cowl Crooks

I dunno. This comic just didn't work for me. I was always a big fan of Edmond Hamilton's Legion stories, but there was a certain something missing here.

Basically, Perry White is giving Commissioner Gordon a tour of the Fortress of Solitude and they get into some of the weapons. One of them accidentally goes off and turns the pair both younger and evil. Perry activates another machine to give himself some temporary powers. Gordon is left out because the device takes hours to recharge. The pair then don (lead-lined) costumes and proceed to give Superman and Batman a bunch of trouble.

They have a few encounters, and Anti-Superman and Anti-Batman seem to know the heroes secrets. Yet, not their secret identities. Which Batman & Superman were really worried about. Superman figures out the puzzle and cures the villains of their evil ways.

Well I liked the art, and the cover I think is great looking. Then again I am a big sucker for the old DC checkerboard.

We also get a reprint of a Green Arrow story from World's Finest #100. It is pretty terrible, and hardly worth mentioning, or remembering. I can't recommend this comic.

One of my favorite comics of all time. Bought it off of the spinner-rack as a young kid.

While I liked the color scheme of the Anti-World's Finest Duo, this issue was really influenced by the Batman TV show with cameos by the Joker, Penguin and the Riddler. They even mention Chief O'Hara!

Plus the younger-looking Commissioner Gordon looked exactly like Neil Hamilton, the actor who played Gordon on the show.

For a Fortress of Solitude a lot of people got in there. Lois and Lana I'd expect, but the Chief and Commissioner Gordon?

Jeff of Earth-J replied to Jeff of Earth-J's discussion Dark Shadows
"I like to think Janet Findley was a professional associate (perhaps rival) of Peter Guthrie.…"
1 hour ago

The Baron replied to The Baron's discussion The List of 758 Super-Heroines
"Added Chameleon Girl and Phantom Girl (Linnya Wazzo)."
2 hours ago

The Baron replied to The Baron's discussion The List of 756 Super-Heroines
"The Maid is ome of my favorites.  She's on the list, for sure."
3 hours ago

Rob Staeger (Grodd Mod) replied to Jeff of Earth-J's discussion Dark Shadows
"Well, now I know why I had such a hard time with this stretch. It's episode 644. I fell asleep…"
3 hours ago

Jeff of Earth-J replied to Steve W's discussion A Cover a Day
"I personally would count tally that one differently, title changes notwithstanding. FIRST…"
4 hours ago

JD DeLuzio replied to Steve W's discussion A Cover a Day
"The series lasted long enough for the protagonist to dye her hair."
6 hours ago

Peter Wrexham replied to The Baron's discussion The List of 756 Super-Heroines
"The Maid is another heroine appearing in Top 10: The Forty-Niners."
7 hours ago