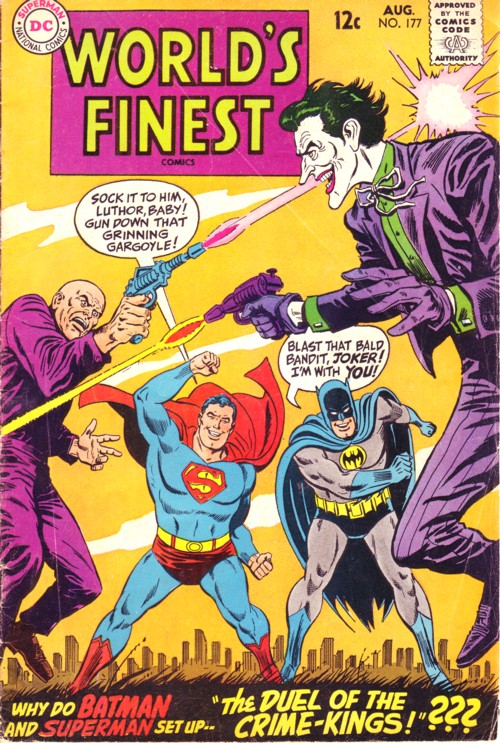 Story: Duel of the Crime Kings!

Lex Luthor is stuck in Gotham Jail (I wonder why he is in that jail?), and fashions a device to send a message that offers a million bucks to whoever breaks him out. A few days later Batman shows up to check on Lex, believing him to be a robot. It is actually the Joker in disguise! He breaks Luthor out of jail in his Battymobile.

The pair drive to one of Luthor's hidden stashes to get the money, and they are set upon by Batman, Robin, and Superman. During the fight Joker shoots Robin, and Luthor takes Superman out of the fight with some kryptonite. Luthor quickly soups up the Battymobile and the villains fly away before the heroes can regroup.

The diabolic duo figure they make a pretty good team, and decide to team-up together for some more capers. Luthor has a device (looks like a giant rotary dial) to bring people from the past to help them, and he uses it to bring Benedict Arnold to the present. Okay, I guess. The Joker misdials and calls up Baron von Munchhausen. Finally, Lex calls up Leonardo Da Vinci. They know they are going to have to trick the Baron and Da Vinci into helping them. This is a pretty weird crew. The Mona Lisa is on display in Metropolis and they convince Da Vinci they are just recovering it. Da Vinci ends up being a master at heist planning, and the present easily allows them to build his inventions. Superman and Batman try to foil the crime, but Batman is captured and fired out of a giant cannon which again allows the bad guys to escape when Supes is forced to save him.

Also, Luthor and the Joker are battling over who is in charge of the gang, with Benedict Arnold sowing seeds of mistrust. He convinces them to have a duel to find out who is in charge. He then lets Batman and Superman know what is going on. Benedict figures one will die, the other will go to jail, and he will take over the gang. Benedict watches the duel on a monitor and both villains kill each other! Their seconds bring them back to the base, and Lex and Joker jump up and attempt to kill the traitor. But wait! The seconds are actually Superman and Batman in disguise. They capture Luthor and the Crown Prince of Crime (with the aid of the Baron and Da Vinci), and send the men back to their respective pasts. It amused when Superman tells Benedict Arnold they saved his life. I was just thinking,”Um, well...I guess.”

This was a really fun story, and I enjoyed it quite a bit. Although Baron Munchhausen was a really odd addition to the story. It is so off the wall it works. The art doesn't look like typical Curt Swan, I figure that is the work of Esposito's inking.

This reprints a story from Gang Busters. A decent story of some prisoners being transported by a police officer, but their plane crashes. The pilot is hurt, and he gives directions to the officer on how to get to the nearest town. The prisoners of course plan on an escape. Quickly the crooks find out the police offier has gone deaf from the crash, and they intentionally try to lead him astray. Hoping to wear him out so they can get away. Yet, they seem to keep going thew correct way, and they do get to the town. The police officer explains he was following the rules of nature to get them to where the the pilot told him to go. He knew the crooks were trying to divert him off course. The BIG problem is that he was deaf the entire time and wouldn't have been able to hear the pilot's directions. Outside of that major plothole a good read.

My brother and I bought this comic and JLA #64 (the first appearance of the modern age Red Tornado) off of a spinner rack on a boat. A huge ferry up in Seattle. Pretty sure they were the only comics I've ever purchased on water.

"Sock it to him Luthor baby!" - Awesome.

Randy Jackson replied to Randy Jackson's discussion The List of Superhuman Characters who Can Split into multiple versions of themselves or multiple physical people
"Eclipso,  The Spectre and Composite Superman are good  Captain Marvel(Xam) doesn't…"
1 hour ago

Randy Jackson replied to Randy Jackson's discussion The List of Superhuman Characters who Merge Together
"Sounds like Robby Reed belongs on the list of characters who split. The others are good and will be…"
1 hour ago

Jeff of Earth-J replied to Jeff of Earth-J's discussion Swamp Thing
"While we're waiting for Tracy to catch up, why not read today's Superheroes Every Day…"
2 hours ago

Luis Olavo de Moura Dantas replied to Randy Jackson's discussion The List of Superhuman Characters who Merge Together
"Vanguard's exact nature hasn't been clarified far as I know.  The composite form…"
2 hours ago

Jeff of Earth-J replied to Eric L. Sofer's discussion Are any new books worth it?
"Okay, Eric, specifically for you... THE MARVELS by Kurt Busiek and Yildiray Cinar. 12 issues,…"
2 hours ago

Mark Sullivan (Vertiginous Mod) replied to Eric L. Sofer's discussion Are any new books worth it?
"I don't buy monthly books anymore, so I can't help. But welcome back!"
3 hours ago

Eric L. Sofer replied to Randy Jackson's discussion The List of Superhuman Characters who Can Split into multiple versions of themselves or multiple physical people
"Hmmm... What about Captain Marvel? No, not him - the "SPLIT!" Captain Marvel. Eclipso…"
3 hours ago

Eric L. Sofer replied to Randy Jackson's discussion The List of Superhuman Characters who Merge Together
"Unless I missed it, how about the Eternals forming the Overmind? Robby Reed occasionally dialed H…"
3 hours ago

Ahh, good to be back.I haven't bought ANY new comics three or four years, and only a bare few then,…See More
4 hours ago
2 Comments 0 Likes