A Comic a Day

As some may remember from the old board I have a ton of comic books that I have never read. My goal is to read at least one a day (yeah right), and when it strikes my fancy to do so to review that comic here. Once again join me as I plow through years of comics that have been lying around unread.

You had to have been there at the time. It's one of those things you need a healthy dose of nostalgia when you find it again after many years.

Cover art by: Who the heck knows? 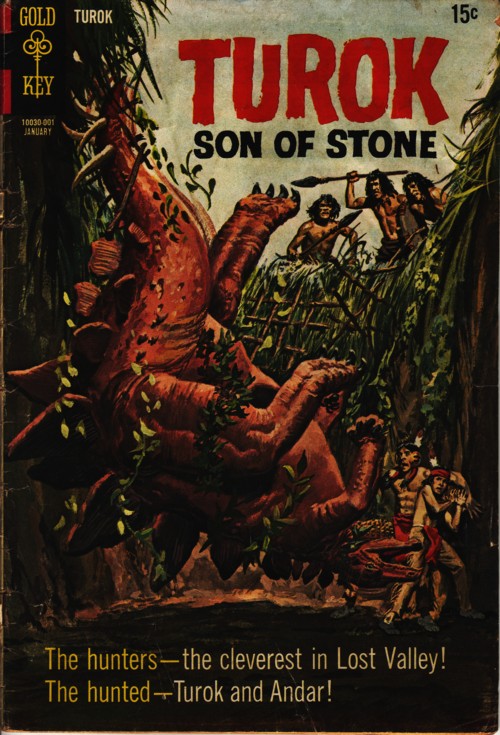 Turok and Andar are looking for a way through a pass to explore an unknown valley when they are chased away by some honkers (dinosaurs for the uninitiated). They see some other
dudes hunting them, so they shoot one of them with their arrows. The
new guys are hacked off that the two killed the honker. These new
hunters lure another honker into a pit that they had built in order
to trap them. Everyone gets into a peeing match as to who are the
better hunters, and after trapping Turok and Andar and taking their
weapons a deal is struck. If Turok and Andar remain uncaptured by the
hunters for a full day then they will be allowed to live, other wise
they die.

Well we get some pretty exciting “chases” as we follow the duo across mountains; into a desert like place; into the forest climbing trees. They eventually fall into
another of the hunters pits, but escape when a dinosaur falls in and
the hunters go to get other tribesmen to cut the meat. The duo use
that time to climb out, by using the carcass as the height they need.
After a few more scuffles Turok and Andar survive the day.

First, thanks to the GCD for the creator credits on this one. Second, I hate the term “honkers” for dinosaurs. Anyone have a better one they could have used? Next,
this is not a very good comic. Somehow, someway they made people
trying to survive and fighting dinosaurs boring. The art is pretty
weak as well. This was my first ever issue of this version of Turok.
Maybe it was better in the earlier issues, I don't know. Heck even
for a painted cover that Gold Key like to use this is a pretty weak
entry.

I'm sure that is true, but I don't have any nostalgia for these comics. if I think it is bad I will certainly say so.