Here is an obscure K:  Captain Kentucky.  Some early work by Don Rosa. The Comic Reader may not be a comic book per se, but it is a fun image of the various captains. 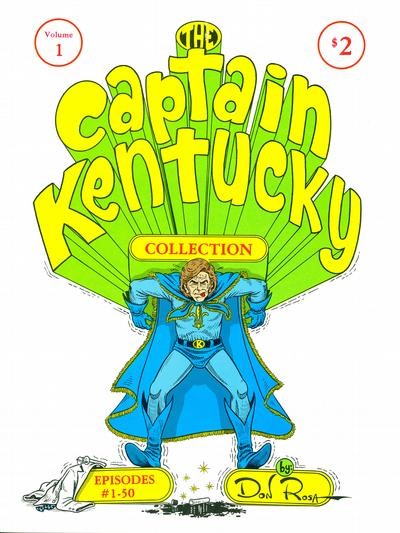 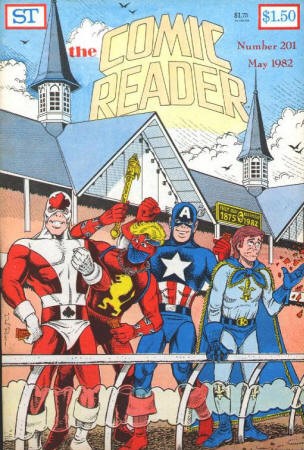 Two iconic Kang the Conqueror covers from my youth! And one is by Kirby and features Cap's Kooky Quartet!

John Romita inked the second cover. His interview in Alter Ego #9 has caption showing how Kang's right hand was moved. The caption says the Code mandated the change, but it's my guess Lee thought Kang looked hunched and off-centre. The Marvel Triple Action version has the original hand, but Kang has been lowered to accommodate the logo. I like the resulting effect.

First time I'd seen a cover with the "still 10 cents" blurb.  I suppose must have been after most other companies had already gone up to 12 cents and when Marvel's only superhero mag was the Fantastic Four. 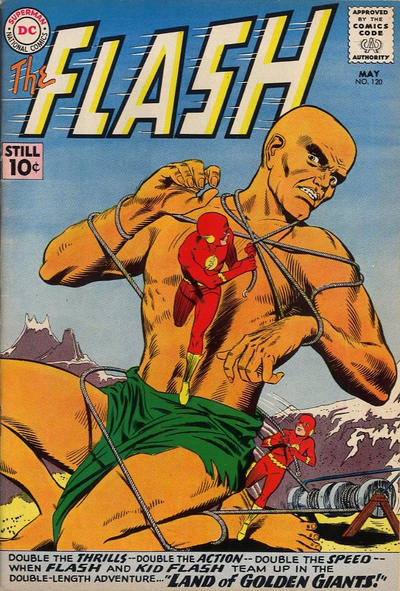 Kirby's Kookie Quartet vs. Kang cover is one of his classics.  Even as a kid I quickly figured out that a cover like this, featuring a giant-sized baddy looming over the heroes, was usually symbolic rather than a representation of an actual part of the story within.  What bothered me were the covers that totally misrepresented the contents within, but those were relatively rare.

Looking at the Newsstand feature on Mike's Amazing World:

The Dell titles on sale in November 1960 were marked 10 cents. In December 1960 they were 15 cents. The "still 10 cents" markings, when used, were probably in reaction to Dell's pricing. In mid-1962 Dell phased in a 12 cent price, probably due to competition.

Either the printing costs suddenly jumped or, just as likely, the retailers wanted a higher price to justify rack space. Possibly someone more knowledgeable can provide more insight.

What bothered me were the covers that totally misrepresented the contents within, but those were relatively rare.

During the Carmine Infantino era at DC Infantino designed a lot of the covers. Dick Giordano has said Infantino didn't have the feeling that covers shouldn't lie, and sometimes they did. The horror titles often had non-story-tied covers.

In the Golden Age many covers had generic images, and generic images aren't always easy to tell from story ones. Sometimes the covers weren't generic, and it's a surprise to learn they didn't match the story.

I was recently looking at the covers of Adventure Comics #93 and #100. They seem to be Kirby covers, and neither matched its issue's story. The title went bimonthly with #86, so there was over a year between them. #93 predates Kirby's return to the US, so it must have been done some time earlier. #100 appeared a month after his release from the military, so it's possible he drew it after he returned to the US but while still in the military. (I owe this point to Richard Willis.)

#100's image is a goofy one: it apparently shows the Sandman and Sandy in a time machine, filming ancient Atlantis! #93's shows them riding an exotic giant lizard. I think as a reader I could accept #100's cover being a non-story one, although it's not really a generic image, but would feel deceived in #93's case. That's partly because the story title blurb on #93's cover implies the image goes with the story. #100's cover is blurb-less.

Fiction House routinely ran generic covers on Jumbo Comics, starring Sheena, and Jungle Comics. What's confounding is they often had story titles that don't match the stories. Apparently Fiction House thought that didn't matter, but it seems a bad idea to me. The cover from Jumbo Comics #86 is a case in point. I reviewed the Sheena story here.

The first issue of Fighting American had a cover that would've been acceptable as a generic image, but was tied to a story. The covers from #2-#5 were all story-tied. The covers of #6-#7 are very non-generic but not story-tied. Possibly all the covers were done first, and in the earlier cases stories were done to match them; but those last two covers make one want to read the stories, and it's confounding S&K thought they didn't need to provide them.

Sometimes publishers solved the coordination problem by tying covers to text stories. Examples I know of are Charlton's Charlie Chan #6 (which may have been an inventory Prize issue), and ME's Red Mask #52.

Ah, my previous comment was speaking mostly of Silver & Bronze Age Marvels, but I bow to your expertise on a far wider range of comics, Luke.  I know most humor comics, such as from Harvey, had covers that rarely had anything to do with the contents other than featuring the title character(s) and were mostly gag panels.

As to comics prices, I started regularly collecting comics shortly after they went up to 20 cents (or down, in the case of Marvel, from their month of being at 25 cents) with a penny sales tax.  And I remember just before the price went up covers would include the blurb "sill only ..." for a couple of months or so before it went up by another nickel or dime throughout the '70s & '80s.  Seemed remarkable that the price of comics for a dime each lasted from the 1930s to 1961, although not so remarkable when you realized that the dime comics of the '30s & '40s usually had over twice as much content as those in the latter era.  And even the early 12 cent comics had more story content than those of the '70s priced at 20 cents or more, generally 22 pages vs. 17 pages, as well as 2 pages of letters vs. one or just half a page or none, as happened with many Marvel titles from the late '70s on (and not counting reprints).

After reprinting his only appearance in Batman Family #3 (F'76), the Kite-Man got a rematch in Batman #315 (S'79). Subsequent showings treated him mostly as a joke character, the best being Hawkman #4 (N'86) when we learned that his real name was "Chuck" Brown! Rats!

But now he's a feature player in the current "War of Jokes and Riddles" storyline! The Kite-Man!! Yikes! 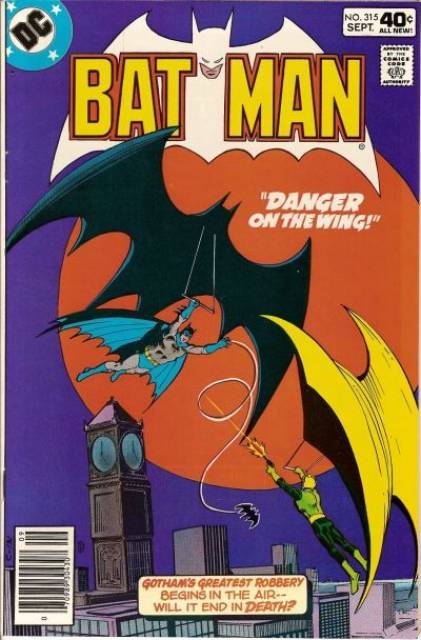 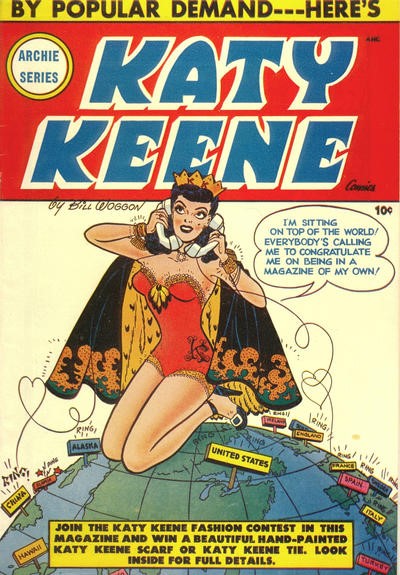 I'm not sure.  In my own case, at least, once I started purchasing comics on my own, and given my limited budget and a bunch of comics I wanted to get, if it came to a choice between 6 25 centers at $1.56 or 3 Giant-Size 50 centers at about the same price, I would go for the slimmer 25 centers, and as it was I got very few of those Giant-Size mags when they were new on the stands, although I often skimmed through them at the stores.

I suspect that if in the '50s, publishers tried to keep the page count for most comics at 64 pages, the cost might have gone up to 20 or 25 cents before 1960, never mind holding until the 1970s.  And at any rate, readers might have gotten maybe one or two "short" good stories per mag and a bunch of rubbish filler to pad them out.  Even Kirby would have had trouble completing so many pages for multiple mags with quality work.  His work for Marvel got much better when his page count per month went down circa 1966.

According to GCD, Action Comics (as an example, cover dates):

I think they are counting the front and back covers as four pages in all cases. The changes in 1943 and 1944 were probably due to the wartime paper shortage. Looking at inflation rates, 10 cents in November 1951 was the equivalent of 93 cents today. So if they had kept to 52 pages in 1951 and raised the price from 10 to 15 cents in November 1951 you would be asking the comic buyer to go from buying a comic for the equivalent of 93 cents to $1.39. Wages were dramatically less in 1951 and readers couldn't have paid that much. Up until 1960 the comics companies knew they could sell a smaller product for the same price. Today you may notice that milk and ice cream cartons have been reduced in size to disguise the price increase.