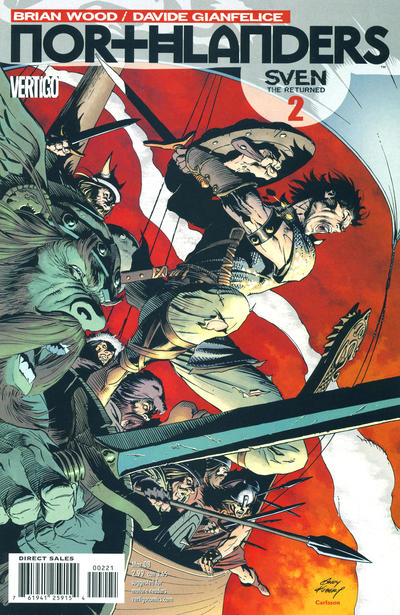 Night Girl was given great power but a great weakness which put on the Legion of Substitute Heroes. It was her long-lasting romance with Cosmic Boy that gave her more credibility than her fellow Subs! 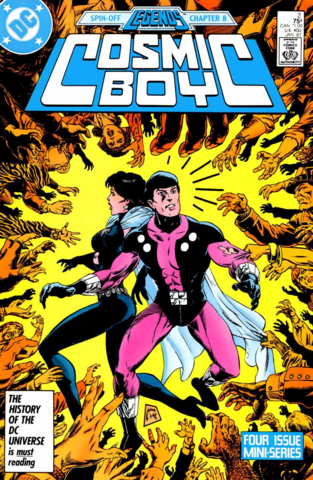 Even as drawn originally, Night Girl in her head-to-toe black costume used to really float by boat as a kid. 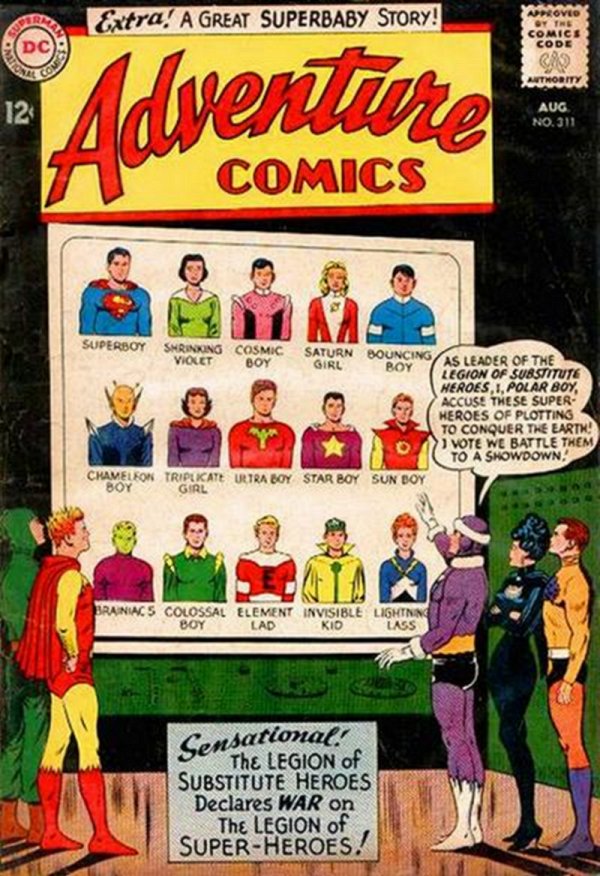 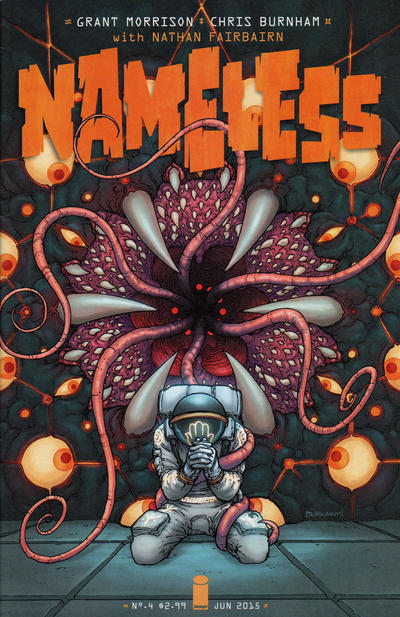 I've racked my brain over the last two weeks trying to think of a range of covers as a suitable testament to the letter "N".  As I'm sure you'll agree, it's a very difficult letter. Then, as I was sifting through covers on Pinterest, I finally hit on the solution - Not Brand Echh!  I loved NBE. I bought the first issue in August 1968 and was instantly captivated.  I never figured out who Forbush Man was, but what I did love was that NBE featured satirical send-ups of DC characters. Even at age 10, I knew of the intense rivalry between Marvel and DC, and to see DC characters sent up in a Marvel comic was fascinating.  "Stuporman" - great stuff! NBE #7 featuring the origin of Stuporman - love it!  With Jimmy and Lois in the background! 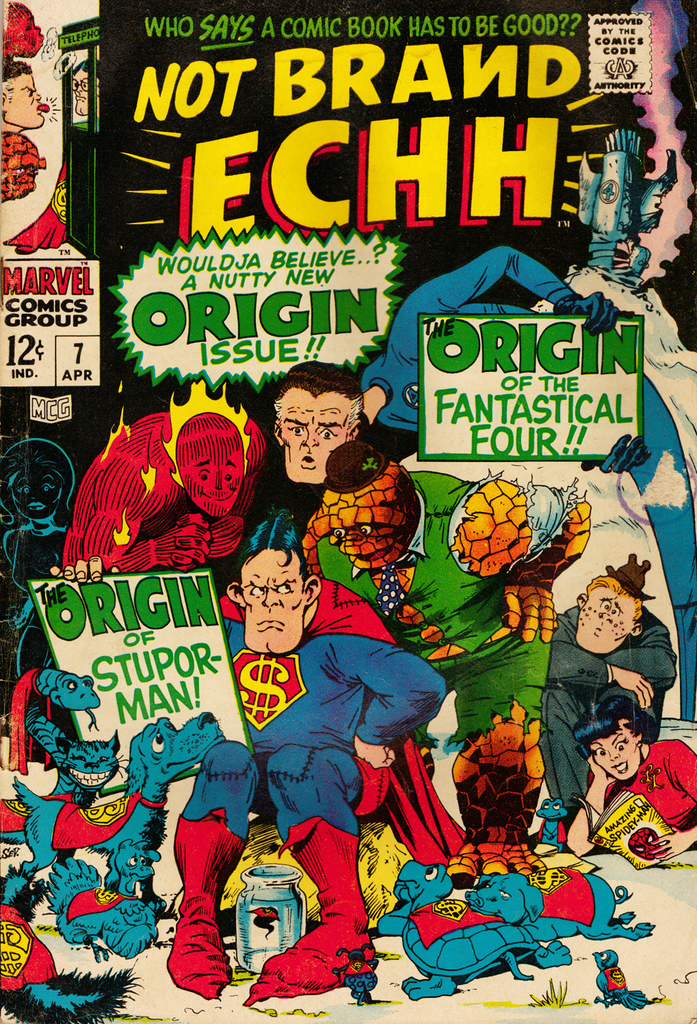 Not Brand Ecch #1 (AUG67) went on sale in May 1967. Leading up to that, Stan had been occasionally referring to a fictional person named Irving Forbush in some of his ramblings. I thought I could find an example of this, but no luck. IIRC, they never showed his face

Before that, there was the lead character Nellie Forbush in the musical South Pacific. Stan either knew someone with that surname (I never have) or just thought the name was cute after seeing the musical or its movie adaptation.

Got you covered on the Forbush bio.

In 1956, the company that would become Marvel Comics began publishing a humor magazine called Snafu. Since The Saturday Evening Post proudly claimed that it was "Founded by Benjamin Franklin," writer Stan Lee claimed that his magazine was "Founded by Irving Forbush, Losted by Marvin Forbush." Not a great joke, it nevertheless would remain with comic fans for many years.

Lee ran a column in the original Marvel comics. He called it "Stan's Soapbox" and penned it in the style that permeated Marvel well into the 70s and 80s. The Soapbox featured bombastic but friendly-sounding copy which talked about Marvel’s staff as though they were a social group (many of them, in fact, worked at home), and created a sense that the reader was being invited to join. Irving Forbush was a part of that, an in-joke that fans shared, even if none of them really knew who Forbush was.

Lee and others often mentioned Forbush in the letters column and Bullpen Page, and Marvel’s fans started mentioning him as well. He occasionally appeared in the credits at the start of a comic—- allegedly assisting, for example, with art. These references reinforced the idea that he existed and held some position with the company.

Forbush soon appeared within Marvel's comics, as well. Several celebrity-gawkers may be found among the crowd gathered around the Baxter Building for the wedding of Reed Richards and Sue Storm in Fantastic Four Annual #3. Among these we see the Brooklyn Chapter of the Fantastic Four fan club, fans of Millie the Model, and a partially-identified group desiring to see Irving Forbush.

Marvel’s 1960s parody comic, Not Brand Echh featured Irving and his super hero alter ego, Forbush-Man. This character clearly shows the influence of DC’s original Red Tornado. He wears long red underwear emblazoned with an F and a blue cape, and he masks his face with a pot with eye-holes. In this incarnation, Forbush worked as a custodian at Marvel Comics. He tries to get super hero's autographs, but constantly fails. His costume appears to have been an attempt to fit in with his idols, though a more direct inspiration is his aunt, who hit him in the head with a pot while he was doing dishes.

In the 1980s and 90s, Marvel relaunched the Not Brand Echh concept as What Th--?, and Forbush-Man made occasional appearances. Largely, however, he is an old fannish gag, a remnant of the original 60s era Marvel, a vision of the company which no longer exists.

By now, however, the jig has long been up. Stan Lee discussed Forbush's history and fictional nature in a late-1970s Stan's Soapbox.

Thanks, JD. This is a lot more than I ever knew about Forbush. IIRC, he is also mentioned on the Merry Marvel Marching Society record that was given to members.

"From Canada It Came" 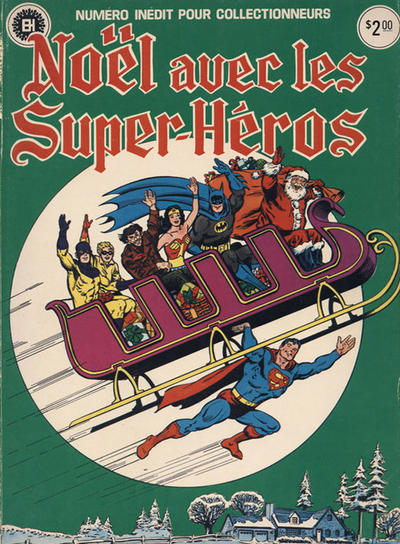 Interesting that it has the New Look Batman along with Sandman and Sandy on the cover. I assume that the contents are Christmas stories featuring the cover characters.

Jeff of Earth-J replied to Captain Comics's discussion Does anyone have James Bond DVDs or Blu-rays?
"A good James Bond trivia question is "What is the only movie in which James Bond sings"?…"
2 hours ago

Jeff of Earth-J replied to Commander Benson's discussion Deck Log Entry # 240 An Empty Chair
"Words fail me, my friend. Please accept my and Tracy's deepest and most sincere condolences,…"
2 hours ago

Steve W replied to Steve W's discussion A Cover a Day
"@Peter - I have the same problem; 8 covers left and only 4 days to go. So, 2 a day from me till…"
4 hours ago

The Baron replied to Commander Benson's discussion Deck Log Entry # 240 An Empty Chair
"My condolences to you and Cheryl, and Rick's other family and friends, sir."
5 hours ago

Richard Willis replied to Commander Benson's discussion Deck Log Entry # 240 An Empty Chair
"Commander, I have never had a son or an actual brother, but you, your son and all veterans are my…"
5 hours ago

JD DeLuzio replied to Steve W's discussion A Cover a Day
"I don't think anyone has posted this one. It was my introduction to Strangers in Paradise and…"
6 hours ago

ClarkKent_DC replied to Commander Benson's discussion Deck Log Entry # 240 An Empty Chair
"A wonderfully eloquent epitaph. My deepest condolences to you, Commander, and to Cheryl."
7 hours ago

Mark Sullivan (Vertiginous Mod) replied to Commander Benson's discussion Deck Log Entry # 240 An Empty Chair
"Such heartbreaking news! I am sorry for the family's grief. But you wrote about it beautifully…"
8 hours ago

Eric L. Sofer replied to Commander Benson's discussion Deck Log Entry # 240 An Empty Chair
"Commander, I hope that the sorrow passes quickly, to be replaced by the love and honor and warm…"
8 hours ago

Philip Portelli replied to Commander Benson's discussion Deck Log Entry # 240 An Empty Chair
"My sincerest condolences to you, your wife and family, Commander. Be strong and remember the love.…"
8 hours ago

doc photo replied to Commander Benson's discussion Deck Log Entry # 240 An Empty Chair
"My condolences to you and Cheryl. I can't imagine the grief that comes with the loss of a…"
8 hours ago