A good start: A new series, and four returnees light up the screen

No, it’s not a season premiere, just the return of the series for the final five episodes of season 5. But it feels like a premiere, since the last episode aired March 31. Weirdly, season 6 is right around the corner, premiering Nov. 16.

What Happens: Archie, friends and allies round up prisoners Hiram Lodge had allowed to escape his prison with orders to damage Riverdale as much as they could. Jughead finally comes down from his psychedelic mushroom trip and decides to go to New York. Jughead’s ex Jessica doses Betty and Tabitha with the same mushrooms and steals Jughead’s manuscript. Penelope Blossom launches a new religion, while Cheryl has visions of her dead twin brother, whose bones she keeps in a trunk.

My Takeaway: I always assume that each episode of Riverdale is going to be the one that’s going to go so far over the top that my suspension of disbelief snaps like a cheap garter belt and I stop watching. Re-reading my own recap above, this one should do it. But Riverdale, while preposterous, is just too addictive.

Also: Three gorgeous gals are trying to find and help Jughead, either because they dated him or because they want to. Honestly, what do they see in the guy? He does drugs, he’s in debt, he’s a slob, he’s basically homeless. ‘Tis a puzzlement.

Also, also: Jughead wears a Superman shirt throughout, and Batman is referenced. Remember, the “W” in “The CW” stands for Warner Bros. 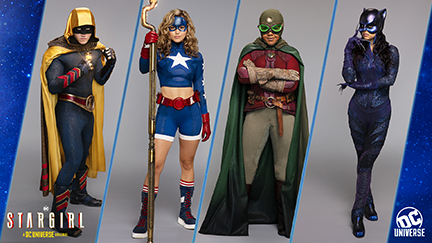 What Happens: A flashback reveals a creepy kid named Bruce (Bruce Gordon, we presume, from Eclipso comics) kills the original Dr. Mid-Nite’s daughter with Eclipso’s black diamond. The late Dragon King’s daughter, Cindy “Shiv” Burman, has the diamond, and intends to recruit Courtney’s younger brother for a new Injustice Society. Several other supervillain spawn are also seen in the episode, which we must assume is foreshadowing. Meanwhile, Courtney has to attend summer school, Yolanda is being crushed by guilt for killing Brainwave, Beth’s parents are getting divorced and Rick is feeding Solomon Grundy, who is living in the woods. Oh, and Alan Scott’s daughter shows up to claim the lantern.

My Takeaway: I don’t understand why Grundy needs to eat, being a plant-based revenant. Maybe his origin is different on the show.

The appearance of Eclipso means a very dark season. (He’s the Angel of Vengeance, and the black diamond can “eclipse” anyone and turn them evil.) The Shade is supposed to appear also, another darkness-based villain.

And I couldn’t be happier to see Jade Scott, the original Green Lantern’s daughter, show up. She’s one of my favorite Justice Society of America legacy characters, and Green Lantern’s light seems a natural counter to Eclipso. Plus, the show has so far avoided finding new versions of the more powerful members of the JSA, like Green Lantern, Flash, Dr. Fate and Thunderbolt. That seems to be changing. (Yay!)

What happens: We learn that Mariner’s exercise program consists of escaping from Cardassian prisons on the holodeck. Tendi tries to re-write Rutherford’s brain to ensure he will remain her friend. Commander Ransom is exposed to “strange energies” and pulls a Gary Mitchell (from “Where No Man Has Gone Before” in the original series), and also an Apollo (from “Who Mourns for Adonais,” also in the original series.) Also, Mariner and her mother admit they can’t stand working with each other.

My Takeaway: The trivia and Easter egg references to Star Trek canon return unabated, making this show perhaps the greatest one ever for die-hard Trek fans. Ensign Boimler doesn’t appear in this episode, but a holographic version of him still slips in a clever reference to the Star Trek: The Next Generation episode “Chain of Command.”

The bit that made me laugh out loud was when the doctor looks up “Strange Energies” in her tricorder, because they happen often enough to be a routine medical condition. 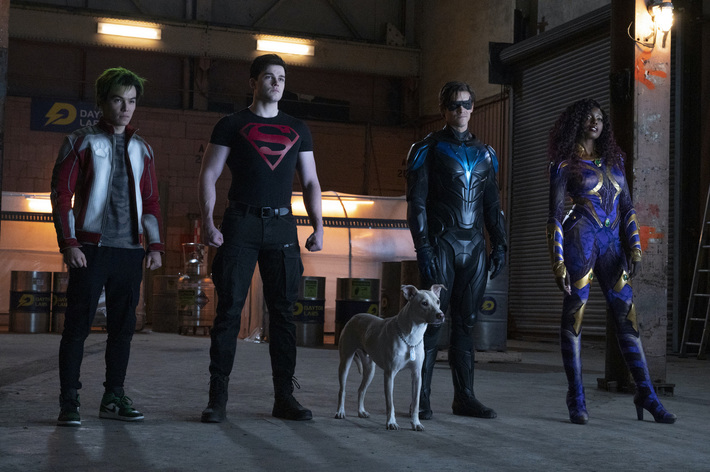 What happens: A lot. I don’t have enough room to recap all three episodes, but right off the Bat (ha!) The Joker kills Jason “Robin II” Todd. Bruce Wayne goes off the deep end and kills The Joker, before disappearing. Dick is taking criminal-profile advice from Jonathan “Scarecrow” Crane in Arkham, in order to find Jason, who has somehow returned from the dead. He goes by the name Red Hood, and is breaking very bad. There’s also a mysterious partner supplying Jason with high-tech weapons. We learn Alfred and Commissioner Gordon have died (between seasons) and Barbara Gordon, crippled by The Joker (also off-camera), is now police commissioner. She has some issues with Dick, who’s an ex, and with Bat-people in general. Finally, Jason affixes a bomb to Hank and tricks Dawn into setting it off, while Conner arrives at a way to defuse it just a micro-second too late.

My Takeaway: Wow, guilt all around! Also, deep dives into comic book lore, with some modern twists.

The Joker killing Jason with a crowbar is straight out of the 1980s storyline “A Death in the Family,” which Kory name-drops. Jason’s return as the Red Hood is also canon, although he’s more vicious and lethal on the show than he ever was in the comics, leading me to believe he’s being controlled by his mysterious partner. (And right now the only candidate is Scarecrow.) Joker putting Barbara in a wheelchair is from The Killing Joke (1988), which temporarily ended her Batgirl career (also referenced on the show). And Babs and Dick having once been an item? Yep, that’s from the comics, too.

This is a pretty grim show. Yes, Jason came back from the dead, and it’s almost a given that Donna will, too. But Aqualad seems to be a permanent member of the choir invisible, and I really don’t see Hank, ah, pulling himself together.

The first episode of What If …? starred Peggy Carter (center, voice of Hayley Atwell) as the first Super-Soldier, and lifts entire scenes from Captain America: The First Avenger. (Courtesy marvel.com)

“What If … Captain Carter Were the First Avenger?”: Season 1 premiere, Wednesday, Aug. 11, Disney+.

What Happens: We meet The Watcher, who explains he will be narrating stories from the multiverse, where familiar stories take strange turns. The first occurs when Peggy Carter becomes a Super-Soldier instead of Steve Rogers in World War II. The events of Captain America: The First Avenger then unfold, only with Carter in Union Jack underoos, and Rogers playing the Bucky role in an armored “Hydra-Stomper” suit. Peggy even loses about six decades in an alternate dimension, as opposed to being frozen in an iceberg, returning to the present unaged to meet Nick Fury and Hawkeye.

My Takeaway: If you enjoyed First Avenger, as I did, you will enjoy this, as I did. The writing is really clever. For example, when Carter catches Bucky falling off the Norwegian train where he lost his arm in our world, Bucky remarks, “you almost took my arm off!” And naturally, the Hydra-Stomper armor that Howard Stark invents for Rogers looks exactly like the grey armor his son, Tony, creates to escape the Ten Rings in Iron Man (2008).

However, so little new happened that I wonder if the ultimate purpose of this show is to establish alt-universe characters who can be used later in Marvel movies and TV shows. Who’s to say Captain Carter won’t appear in Dr. Strange in the Multiverse of Madness or as the leader of a new Avengers team?