Base of Operations: New York City

Group Affiliations: The Fantastic Four, the Avengers, others

Friends/AllieS: The Fantastic Four, on good terms with most other super-heroes, Alicia Masters, others

Hair color: Brown (as Grimm), None (as the Thing)

History: Ben Grim was born in New Yourk City, and was raised by his Uncle Jake. He met Reed Richard while attending Empire State University on a football scholarship, promising to pilot the spaceship Reed was planning to someday build. Sometime later, Richards approached hinm to fulfill his promise. Ben did so, although he had misgivings, which were justified when cosmic rays overwhelmed the ship's shields. Ben was transformed, gaining super-strength and an orange rock-like appearance. Adopting the codename "The Thing", Ben became one of the founding members of the Fantastic Four. He served with the team on and off for many years. He also served a stint with the West Coast Avengers, as well.

Why He's a Favorite: To me, Ben was always the most interesting member of the Fantastic Four, and also the only who could be interesting on his own, apart from the others. Reed, Sue and Johnny worked well as part of the team, but I never was much interested in their solo adventures, when they had them. Ben was different. He certainly worked well as part of the team, but I enjoyed seeing him off on his own, as well. I remember especially enjoying the old Marvel Two-In-One book, where we got to see him interacting with other heroes around the Marvel Universe. What I found particularly interesting about Ben was that he could work equally well as both a tragic and a comic character. On the one hand, here was a man who had been horribly deformed, so that there were plenty of stories that could be told about him trying to deal with life as a "monster". On the other hand, Ben was also a traditional "New York" character, not too far afield from Chester A.  Riley or Ralph Kramden, and this lent itself to humorous situations. (I remember John Byrne once saying that it was difficult to write "parody" Ben Grimm dialogue that didn't sound like actual Ben Grimm dialogue.) Overall, I just find Ben to be a fun, well-rounded character.

*Columbo's first name was, to my knowledge, never spoken aloud in any of the stories.  However, in my research for this entry, I found that in the episode  "Dead Weight" , Columbo's ID card shows his first name to be "Frank".

Sunovagun! I was just about to call you out on this, and darned if you haven't got a source for it!

And LT Columbo didn't have nearly that much evidence.

You're being kind. As I recall, Columbo's best evidence of foul play was that the victim -- a stereotypical Texan -- would never have tuned his car radio to anything other than a country and western station. 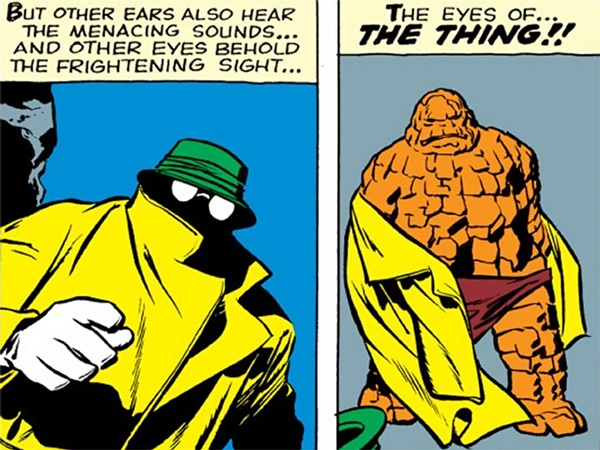 Overall, I just find Ben to be a fun, well-rounded character.

Overall, I just find Ben to be a fun, well-rounded character.

Sure, Frank's his middle name.

Base of Operations: Springfield, USA

Group Affiliations: The Be Sharps, the Pin Pals, numerous others

Special Abilities: Able to withstand repeated blows to the head without being knocked down, near super-human ability to recover from injury.

History: Homer was the son of Abe and Mona Simpson. When he was still quite young, his mother left the family , going into hiding as a result of her political activism.  Homer met Marge Bouvier while they were in high school, and in time they married after she became pregnant with their son,Bart.  Homer went to work for the Springfield Nuclear Power Plant, where he eventually became safety inspector. He and Marge had two more children, daughters Lisa and Maggie.  Homer has had a number of adventures over the years, has dabbled in a number of professions, and has met a wide range of well-known people.

Why He's a Favorite: Homer is an interesting example of the type of character that I think of as the "comedy idiot", a character who manages to do the stupidest possible things, but in an entertaining way.  Homer has a bit more depth than comedy idiots sometimes have, as we do see that for all that he can be selfish, and seldom thinks through the consequences of his actions, we see that deep down he does have a good heart, and will typically do the right thing in the end. To my mind, Homer's appeal as a character is down to a basic combination of factors - the excellent writing that the show had (particularly from the third through the tenth seasons) and the performance of Dan Castellaneta, who really brings the character to life.

*However, Homer can sometimes be quite ingenious in his stupidity

But here's the thing: there is no way that a mere detective lieutenant of police would ever have been able to persuade the city to authorise the excavation of the foundation---private property. In order for the city to be willing to accept the costs---which, as CK and Mr. Willis quite rightly realize, would be staggering---Columbo would have to present, first, his chain-of-command, and then the D.A.'s office, and then the hierarchy of the city management (which would be signing off on the expense) with more than just his suspicions. All he had was a hunch that the businessman was dead, with very little in the way of empirical evidence to support it. In order to get a judge to authorise a court order to compel the city to comply with the excavation, Colombo would have had to present the same overwhelming degree of evidence that is required to have someone declared legally dead.

It's possible (though probably not likely) that his superiors would have gone to bat for him based upon his track record. Letting people get away with murder to save money has its own costs.

Everybody just calling him Columbo reminds me of the Army, and the LAPD was remodeled along military lines when the massive corruption was rooted out in the 1950s.

Homer went to work for the Springfield Nuclear Power Plant, where he eventually became safety inspector.

Where he did a bang-up job!

Homer went to work for the Springfield Nuclear Power Plant, where he eventually became safety inspector.

Where he did a bang-up job!

I was at the ballpark once, and they played a clip from The Simpsons: Homer was connected to a polygraph, and the examiner told him the machine would detect if he told a lie. She then asked, "Do you understand?"

And the machine exploded.

*Columbo's first name was, to my knowledge, never spoken aloud in any of the stories.  However, in my research for this entry, I found that in the episode  "Dead Weight" , Columbo's ID card shows his first name to be "Frank".

I meant to tell you earlier, Baron: very diligent work, sir.  The matter of Columbo's first name being revealed on his police ID is more known than it used to be, but that doesn't make it readily known, by any stretch.

And just to buttress your information, besides the episode "Dead Weight", the good lieutenant also flashes his badge in the episode "A Matter of Honor", first aired on 01 February 1976.  The badge case stays open just long enough and the shot is just clear enough to reveal that it's the same ID as in the still you provided above.

Then, in the ABC-produced revival series, the episode "Death Hits the Jackpot", from 15 December 1991, also has Columbo displaying his badge and ID long enough for the viewer to see it.  Here, he has upgraded his ID card---it's the then-current version of the L.A.P.D. ID card, with his photo in colour.  But his signature still says "Frank Columbo".

Even though it was long before the term "easter egg" was applied to hidden bits of information, producers of television shows were often fond of offering "fun facts" to attentive fans.  Because the name "Frank Columbo" appeared more than once, and on two different ID cards, I suspect this was one of those cases.

It's similar in more ways that one to the lead character played by James Garner on the short-lived show Nichols (NBC, 1971-2).*  Throughout the entire run of the show, Nichols was never addressed as anything but "Nichols".  However, early in the pilot episode, when Nichols resigns his Army commission, the viewer gets a quick-but-clear look at his induction papers, which reveal his first name is---"Frank".

*  Well, he was the lead character for every episode except that last one, where he was killed in the pre-credits sequence, to be replaced by his twin brother, who didn't hide his first name---"Jim".