A trip to the Asylum can be a lot of fun

Comics can be many things, from quiet dramas to flights of fancy to superheroic clashes of good and evil. But some times – maybe the best times – they’re just fun. I’m not sure how to describe the book. It’s about a gorgeous, daredevil, rocket-riding chick who works for some sort of spy agency and tends to fight leftover Nazis, swamp monsters, more Nazis, and in the latest issue, dinosaurs (with Nazis). That’s in Fearless Dawn: Jurassic Jungle Boogie Nights #1 ($3.99), in which Dawn’s arch-enemy Helga von Krause and her mad scientist henchman (who, naturally, looks like Albert Einstein) raise Tyrannosaurs on Nazi Dinosaur Island to (gasp!) rule the world!

The first thing you might notice about Fearless Dawn – well, after the copious amounts of over-the-top, good-natured cheesecake – is a feeling of familiarity. And that’s because Fearless Dawn draws on a host of famous comics traditions.

One such is the original MAD, which was a comic book for its first 23 issues, before becoming the familiar magazine. Back then – the early 1950s – MAD mostly did parodies of other comic books, before branching out into assaulting other media, like TV and movies. But regardless of content, two major comedic approaches launched MAD sales into the stratosphere.

One was the mad genius of editor/writer/artist Harvey Kurtzman, whose humor ran the gamut from the rhythms of vaudeville to the punchlines of the Borscht Belt to the experimental humor of contemporaries Ernie Kovaks and Steve Allen.

As to the second, Kurtzman usually drew his own material, but when he didn’t, he often called on artist Will Elder, a compulsive prankster who packed his stories with tons of extraneous (and usually hilarious) material that he called “chicken fat.” MAD had other things going for it, but the work of Kurtzman and Elder can’t be underestimated in the magazine’s success. 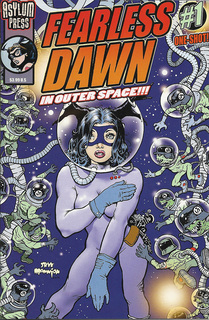 And if you squint just right at Fearless Dawn, the influence of Kurtzman and Elder are readily apparent. And if you don’t believe me, you can believe Forte.

“Steve Mannion’s art and writing style hearken back to the days of classic MAD magazine and the illustrators of the 1950s,” Forte said, “where much attention was paid to detail and the fine art of inking with a brush and inkwell.” And also to zany hi-jinks.

Another comedic trope used in Fearless Dawn is the innocent but gorgeous naïf who has no idea how sexy she is. You’d think Dawn would know that – she’s a hard-drinkin’, recreational drug-usin’, copiously tattooed hardcase – but Mannion draws her as if she hasn’t the slightest idea such a thing as sex exists. That results in lots of “innocent” sexy poses, usually in tiny outfits, not only by Dawn, but by Helga and by Dawn’s partner, Sidekick Betty (who, naturally, looks like famed ‘50s model Bettie Page).

As you can see, there’s lots of chicken fat here. I won’t even attempt to explain Dawn’s headgear, which at times seems like a hat with bat wings, and other times like horns growing right out of her head. For some reason, on the latest issue she opts for a World War II-era Soviet fur hat, with horns suggested by the ear flaps. Why? Well, why not?

Besides, the most important part of Dawn’s outfit – any outfit – is the weaponry that she seems to have all over her person, although it doesn’t appear at first blush (or as many times as you choose to blush) that there’s anywhere to hide those weapons.

The upshot of all this nonsense is a book that doesn’t take itself remotely seriously. But Mannion clearly takes his art duties seriously, so fans of similar books like The Goon will enjoy the ride.

So long as it’s adult fans. While there’s no sex, there is all that cheesecake, not to mention drugs and alcohol. Oh, and violence. Dawn, like all right-thinking Americans, has no problem taking out Nazi goons in whatever splatterific way presents itself. It’s not really “mature” material – there is nothing mature about this book – but I’d probably make sure the audience is at least in high school.

If you want to sample Fearless Dawn, your local comic shop might have a copy, or order one for you. The entire oeuvre is available at www.asylumpress.com, as well as digitally on Comixology, CmicsPlus, Graphicly, DrivethruComics, Kindle and Nook.

And as long as Forte had my attention, he also directed me to two other Asylum books, which are worth mention. One is a new crime noir series of miniseries by comics veteran Mike Vosburg called Retrowood. As the name implies, the series takes place in old Hollywood during the height of the studio star system.

Or as the intro to the latest issue, Retrowood: All Roads Lead to Rome #1, puts it: “The environment is faux Depression-era Hollywood, with snarling gangsters in snappy suits, the untouchable wealthy, corruptible starlets in sleek revealing gowns and elegantly designed automobiles set against the poverty and despair of the average Joe.”

All of which sounds good, but the writer/artist has to have the chops to pull it off. And I was mildly surprised to see that Vosburg does. I’d enjoyed his work on books like Marvel’s Savage She-Hulk and Valiant’s Bloodshot, as well as the faux comic-book covers he did for TV’s Tales from the Crypt. But none of that prepared me for Retrowood, where not only is all the period material spot on, but the storytelling and characters – and especially the women – seem inspired by the writing of Dashiell Hammett and the artwork of the great Gray Morrow.

Two previous issues of the series have appeared, Retrowood: H.I. and L.O. #1-2. As far as I can tell, they are only available in digital form at present.

And finally, I tried Asylum’s Zombie Terrors Vol. 1 collection. Unlike, say, The Walking Dead, Asylum’s foray into the zombie genre isn’t a narrative. Instead, it’s a series of short stories -- vignettes really – from a post-zombie apocalypse world. They read like 1950s EC Comics, with O. Henry twist endings and protagonists who often get the terrible fate they deserve. Which is kinda fun.

And there’s that word again.

Just thought I'd mention that there are two free Asylum Press comics on Comixology. The Fearless Dawn/Asylum Press Samplers from Free Comic Book Day 2010 & 2013, each about 50 pages long, with stories from Fearless Dawn and several other Asylum Press titles.