A Year to Remender 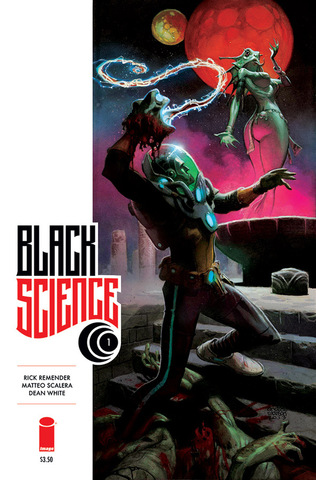 A Year to Remender

Several years ago, Baron Bizarre posed the question, “Did you ever just discover a director?”  The Baron (aka Bob Chisholm) had just discovered the work of Akira Kurosawa, the great Japanese filmmaker who inspired The Magnificent Seven, Star Wars and countless other movies.  Bob articulated that moment of discovery when you become fully aware of a creative genius who- before that moment- you had only faintly encountered.   The question could as easily be asked, “Did you ever just discover a writer or a musician?”  This is the year I discovered Rick Remender.

I had been dimly aware of Rick Remender for some time.  I remember encountering Remender’s name first as the writer on Fear Agent (Dark Horse, 2005).  I didn’t actually follow Fear Agent, but it looked kind of interesting and got good buzz.  A few years later, I ran across Remender’s name again as the writer on the noir comic, Last Days of American Crime (Radical, 2009).  This time, he was paired with artist Greg Tocchini, whom I knew from his excellent work on CrossGen’s DemonWars (2003).  Yet once again, despite a faint interest, I failed to pick up the book for reasons I can’t really articulate.

In 2010, Rick Remender finally entered my orbit of attention as the writer on Uncanny X-Force (Marvel, 2010).   It was a great comic- simultaneously hard-hitting, thoughtful and humorous and easily the best X-book being published at the time.  I followed Remender over to Uncanny Avengers (Marvel, 2012) where he wowed me once again.  Remender combined deft characterization with epic storytelling to create a comic that I looked forward to every month.  Remender was becoming one of my favorite writers.

Fast forward to 2014.  Starting in April, Dark Horse published new editions of Fear Agent.  The first trade paperback was released with an introductory price of $9.99.  I couldn’t pass it up.  I couldn’t put it down either.  I loved the irreverent attitude and fast-paced action.  And I was mesmerized by Remender’s uncouth anti-hero, Heath Hudson.  I devoured that first book in a single sitting.  I quickly put in orders for the next couple of trades, coming one a month for six straight months.

After I read the final trade in September, I started casting about for my next Remender fix.  Fortunately for me, Remender had been writing three new series for Image that were ready and waiting for me to catch up on. I tried Black Science first as that seemed the closest to Fear Agent.  It was another science fiction book with alien life forms and landscapes.  Black Science follows the hapless scientist, Grant McCay, who brought a mixed group with him through a dimension-traversing pillar.  Unfortunately, the pillar is broken- possibly sabotaged- and the group can’t control their destination.  McCay, his children and several co-workers are stranded, jumping from dimension to dimension, simply trying to stay alive.  It’s like Sliders with an edge, or a much weirder Lost in Space.  It’s also entirely unpredictable.  These new worlds are dangerous and characters die.  At the same time, new characters get caught up in their wake and bounce from world to world with the rest of the gang.  I have no idea what’s going to happen next but I can’t wait to find out.

Remender’s other science fiction book is called Low.  For this title, Remender crafted an underwater civilization.  Humans live in bubbled cities submerged way beneath the surface.  They travel by personal submarine and they’re forced to fight against both pirates and creatures of the depths.  Low follows another family, the Cains.  Like the McCays of Black Science, they’re torn apart by separation and loss.  Low features underwater despots and menacing creatures but the real drama comes from the family dynamics and recriminations.  It’s not always pretty, but it’s always fascinating. 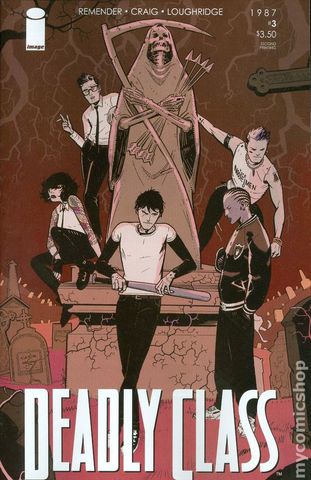 Remender’s best book is also his most personal.  Deadly Class is set in 1987 and it follows the travails of Marcus Lopez, a homeless boy who is given an opportunity for a new life at a school of assassins.  Remender pours his soul into this book, drawing from his own struggles as a wayward youth trying to make a place for himself in a new city.  Yet Remender takes those real-life struggles and amps them up to eleven.  The cliques in Deadly Class are deep-rooted and the differences between them dangerous.  Lopez becomes an outsider among outsiders.  His story speaks to anyone who has ever felt isolated and alone, especially anyone who felt that way in the late ‘80s.  The experiences depicted in Deadly Class (and those related by Remender in the letters column) are more extreme than my own, but they resonate with familiarity and verisimilitude.  I moved to a new town the same year as Remender and his fictional lead (1987) and my parents separated the following year.  I can see myself in Marcus Lopez- except for the killer assassin part.  I don’t mean to make Deadly Class sound like therapy.  It is intensely personal, but it’s also a noir action story with students learning to live on the wrong side of the law.  It has as much action as emotion.  And it features a world as fully realized as anything in Black Science or Low.  1987 isn’t just a random setting.  It’s part of the book- with indie music, skater fashion and the clash of cultures.

At this point, I’m on board for all three of Rick Remender’s Image comics and whatever else he does next.  I also went ahead and picked up the back issues of his noir comic, Last Days of American Crime.  I won’t say that everything he’s written is outstanding.  AXIS- the Avengers/X-Men crossover that he’s currently writing for Marvel- has been disappointing.  But I admire Remender for stretching himself in multiple genres.  And I’m delighted that I was able to enjoy so much of his work in such a short period of time.  It’s fun to discover a new writer and to pick up his back catalog in one big chunk.  For me, 2014 will always be the year of Remender.

Good stuff! I was following Fear Agent as it came out, and was just as hooked. I liked the first collection of Black Science a lot, too. Deadly Class already has a first TPB, with Low coming along in March, and I'm looking forward to getting my hands on those.

There is another earlier Remender creator-owned series I'd recommend. Strange Girl is an irreverent, tongue in cheek take on the Left Behind phenomenon. The title character is left behind after the Rapture, and makes her way in a world populated by demons.

Thanks for the heads up, Mark.  I'll keep an eye out for Strange Girl.

I'd jus tlike to take a moment to say how much I enjoy your columns, Chris. Even though you most often cover topics I'm unfamiliar with, they're always an entertaining read.

I have to say this about Remender's Image titles: One expects the Image titles to slow to at least a bimonthly output after awhile. I don't really think that happens with Remender and the very talented artists he teams with. They come out like clockwork. (I should know--I subscribe through my LCS and I have a stack at least three thick of each of his titles--a good problem to have!)