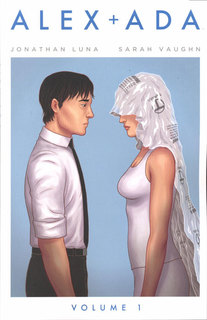 A science-fiction story about the relationship between humans and robots. This future looks a lot like today, except for all of the helper robots in use, even at home (one of them brings Alex his morning coffee). Some of them are androids which appear completely human. There is considerable ambivalence about this, especially after an A.I. system went out of control and caused some human casualties.

Alex has been trying to get over a painful breakup, when his grandmother unexpectedly gives him an advanced X5 android for a birthday present. Of course this is an attractive female intended as a companion: Alex isn’t sure he even wants to keep her at first, but eventually names her Ada (which is part of her model name).

Ada acts human, but she completely lacks free will. She’s like a perfect servant, with no desires of her own except to please her owner. As Alex gets used to having her around he begins to find this disturbing. There’s something about it that doesn’t seem right. There is a law making sentient robots illegal, but Alex begins to wonder...what he discovers, and the decision he makes, are the climax to this arc, the first five issues of the series.

There’s a long tradition of this kind of story, e.g. “I, Robot” and the Terminator movies, not to mention the recently released film Ex Machina. So far this story has had a more intimate scale: it really is about a relationship. It’s a strong introduction to the series, which has me wanting to find out what happens next.

I gave this one a pass, because I could guess how the story would play out from, basically, the first cover I saw. From your description, I guessed pretty well.

But even cliches can be good if they're handled well, and that's also what you're telling me! D'oh! Now I wanna read it!

I was pulled in by the first issue, which I read for free from Comixology. But I do think there's a new slant here. There were surprises in the first arc, and I expect there to be more going forward.