Nobody in Sally Forth likes Sally's mother. She's an intimidating harridan, and she's nasty even when she isn't drinking.

JUDGE PARKER: JULY 25: Also features two characters I have never seen (or, at least, don't remember). I have been reading this strip for 20 years (Sundays only) and I still have no idea who "Judge Parker" is, or who any of the regular characters are. I enjoy reading it, though, for reasons of my own.

When I was a kid, I usually read the gag-a-day comics and skipped over most of the adventure/soap opera/continued story comics. At one point, I resolved to read all of the comics in the paper, even the ones I didn't like, like Mary Worth and Rex Morgan, M.D. and Brenda Starr and Apartment 3-G.*

I say that to say it got me to reading Judge Parker, which I read dutifully every day ... without understanding what's going on one bit.

I have a slight handle on the characters: there's Judge Parker, who is retired and he has a wife, whose name I don't remember. The main character is actually attorney Sam Driver, who has a wealthy wife named Abby Spencer. Abby has two twentysomething daughters (one adopted); one daughter is named Neddy and I don't remember the other one's name. One of the daughters -- I forget which -- is trying to make a name for herself in Hollywood.

Judge Parker has a son named Randy who is a judge, too. Randy has an ex-wife and baby daughter, and the ex is a rogue spy on the run.

A while back, Judge Parker made a run for mayor, and the ex-wife sabotaged his campaign and he did time in jail on trumped-up spurious charges. I don't remember how he got out of jail. And in a recent story, that rogue spy ex-wife essentially kidnapped Randy and their daughter; she took the kid and told Randy "You can come with me and live, or my enemies will kill you. Choose and choose NOW." So Judge Parker Senior has been bitter and angry about that, losing his son and granddaughter to parts unknown.

* (That resolve, however, still didn't get me to read Mark Trail. A man has his limits.)

Wow, thanks Kelvin (and Bob, too)!

SALLY FORTH: I used to read Sally Forth every day until I moved to Texas, but only once a week for the last 20 years. When I said "I" had to check online, actually it was Tracy who read the last week's worth of strips and clued me in. I don't remember ever having seen Sally's mother before, but even I would be better with kids than she was today.

JUDGE PARKER: Oh, yeah... "Abby" and "Neddy"; those names sound familiar. Your summary will be helpful in the days, months and (ugh) years to come... if I remember it. Seems to me Adam Benson gave the lowdown on Judge Parker once before higher up in this thread, but it didn't stick. when I started reading it the continuity was something about a chicken ranch fronting a meth lab...? It went on for so long, I just thought of Judge Parker as "the strip about the chicken ranch."

MARK TRAIL: Ah, Mary Worth and Rex Morgan and Brenda Starr... the St. Louis Globe-Democrat used to carry all of those. When I was in junior high school, my friend Bob used to stop by my house every  weekday morning at 6:30 to watch The Lone Ranger (actually it was Jeff' Collie by then) before we would leave to catch the school bus. Bob didn't read the daily comics (I was into Dick Tracy), but the in the Mark Trail continuity at the time, Andy (Mark's St. Bernard) was being attacked by a barracuda. that seemed to go on forever. Bob would ask me every day how that dog was doing against the barracuda. This went on for years. The next time I see him (if I ever do again), he'll probably ask me about Andy and the barracuda.

Neither the Globe-Democrat nor the Post-Dispatch carried APARTMENT 3-G at that time.

Here's a question I mean to ask almost every week but never get around to it. In Sally Forth, Hillary's friend is now living with the Forths. Can anyone tell me why?

Really? But where had she been living prior to that, and why didn't she stay there?

Oh, you wanted an in-story explanation ... ?

Faye's mother lost her job and couldn't afford her house, so she moved in with her mother and found a new job in another town. This fell during the school year (and COVID), so to avoid disrupting Faye's life by taking her away from her friends and school, Faye's mother and the Forths worked it out so Faye could stay with them at least through the end of school year ... and, it seems, into the summer.

After that, who knows?

A late-breaking development with Faye, after the Forths and company return from that experience in the woods:

You don't have to imagine it. Here's "Cigarette Sadie."

I conjured a wacky duck character. The hunter blows his head off. He doesn't get better.

You don't have to imagine it. Here's "Cigarette Sadie."

As successful as he became, I think Chester Gould was a frustrated gag man. His spoofs of "minimalist" strips (such as "Peanuts"), "Sawdust" and "The Invisible Tribe," often threatened to take over a week's worth of continuity at a time. Were they funny? No, they most decidedly were not. (Maybe that's the joke.)

I enjoy the cameos from other comics in the Dick Tracy strip, from the Dragon Lady to Brenda Starr to Annie.

By the way, any bets on which twin will become the next Phantom?  Both of them are definitely coming of age, and a lot of the current storylines involve the possibility of the 21st(?) Phantom moving on.

Waitaminute... Chip is reading a comic book about Lois's brother? 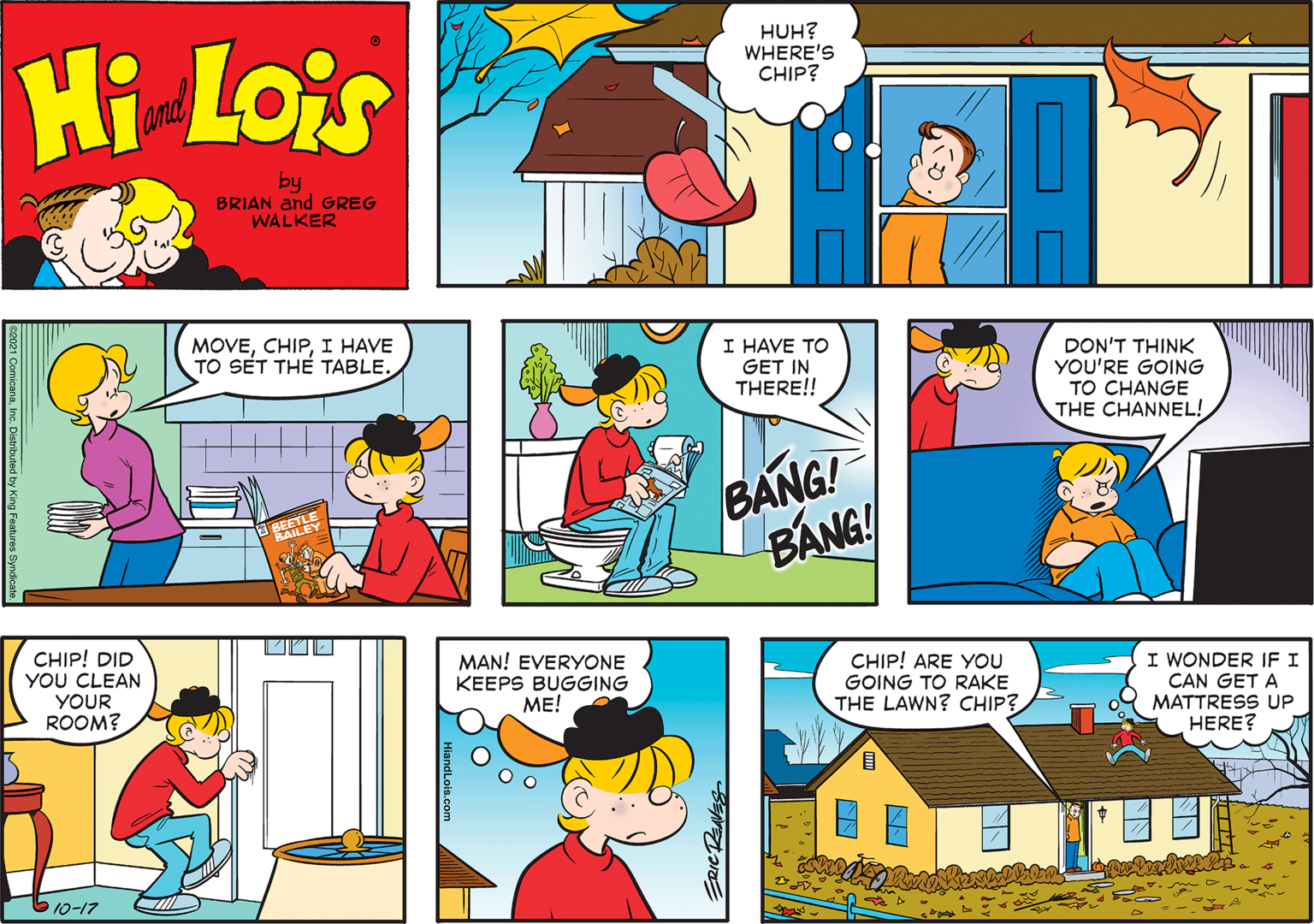 If there can be comic books about Bob Hope and Jerry Lewis and Superman vs. Muhammad Ali, why not one about Beetle Bailey?