The Wizard of Id: 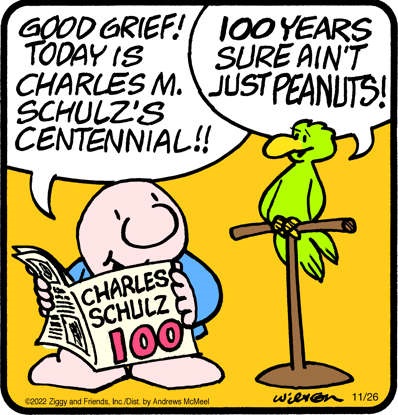 Richard Willis replied to Wandering Sensei: Moderator Man's discussion What Comic Books Have You Read Today?
"Lee Houston, Junior said: In case you're unaware of this, the Funky Winkerbean strip…"
57 minutes ago

Richard Willis replied to Peter Wrexham's discussion Celebrity Mastermind - "The History of DC Comics"
"Luke Blanchard said: Famous Funnies started in 1934. Eastern Color was a printer which had…"
2 hours ago

Jeff of Earth-J replied to The Baron's discussion Movies I Have Seen Lately
"GHOSTBUSTERS: AFTERLIFE (2021): This is the one Tracy refers to as "the one with the…"
5 hours ago

Randy Jackson replied to Captain Comics's discussion Bond #5: 'From Russia, with Love'
"Apparently, the Roma are still out there alive and kicking"
9 hours ago

Captain Comics replied to Captain Comics's discussion Bond #5: 'From Russia, with Love'
"As these things go, this was one of the better Connery films in my opinion. For those of you who…"
10 hours ago

The Baron replied to Captain Comics's discussion Bond #5: 'From Russia, with Love'
"And also explains why he looks completely different every few years.  Either that, or…"
10 hours ago

Irma Kruhl replied to Steve W's discussion A Cover a Day
"Sue and Sally Smith, Flying Nurses #54 (the last issue of the series)"
10 hours ago