In professional wrestling, the outcomes may be pre-determined, but that doesn't make them any more "fake" than, say, professional figure skating.

It doesn't? The outcomes aren't predetermined in professional figure skating. The skaters do their routines and are judged on how well the routine is executed.

No, it doesn't, because I was referring to the performance aspect. Also, both "sports" require a high degree of athleticism and, as you yourself point out, require the execution of set routines. Yes, quite like figure skating, indeed. It's just the scoring that's different.

In my early teens my Dad and I used to watch the wrestler Gorgeous George on TV, he was at the end of his career by then. Apparently he was inspired (in 1941) by an earlier wrestler, 'Lord' Patrick Lansdowne, to establish his flamboyant "guy you love to hate" persona. He took it up several notches. Like others who followed his example, his showmanship and braggadocio would bring in both fans who liked him and others who wanted to see him whipped.

Permalink Reply by JohnD on April 4, 2022 at 6:57pm
Neither hold a candle to Abraham " Gorgious Godfrey " Simpson.

My favorite wrestler was Dick the Bruiser.

I'll have to take your word for it. The site you linked won't let me in without opening a subscription. I can imagine, though.

Dilbert introduces its first Black character in its Diberty way ...

The thing is, many (probably most) newspapers don't print the daily comics in color. 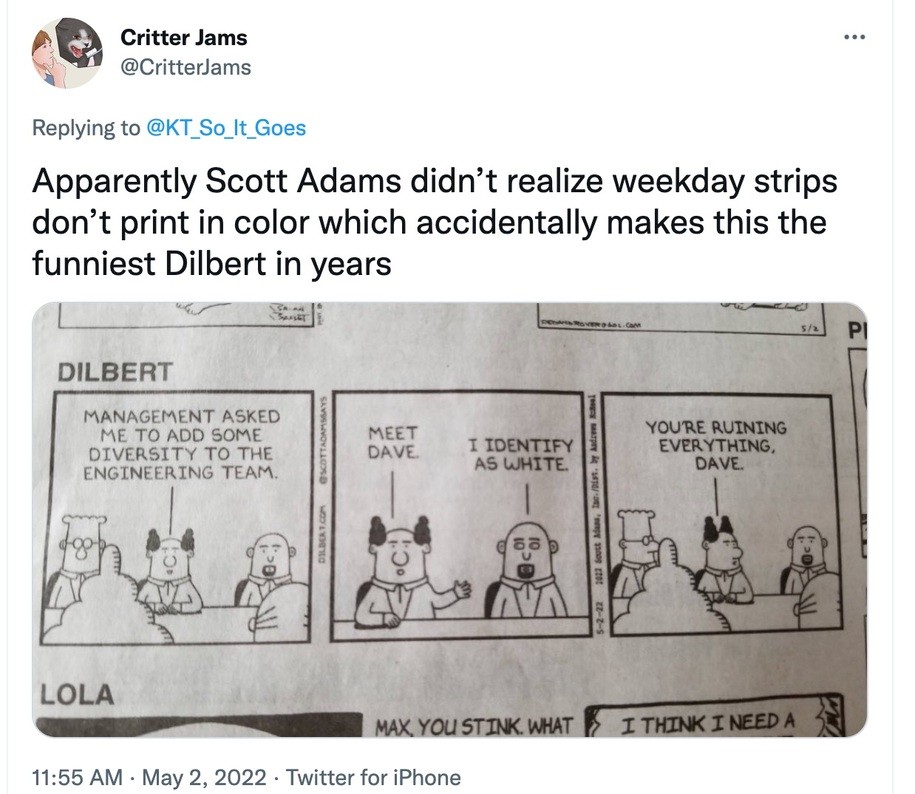 Waiting 33 years to introduce a Black character, and then when he finally does, using that character to attack trans people is very on-brand for Adams.

You should see the way the new Dilbert character reproduced in today's Dallas Morning News. (I looked at the online version, but it doesn't look the same.) I wonder where the fault lies: with the DMN or with Adams somehow? Hang on... I'm going to ask Tracy to post a photo. It's almost as if Adams was reacting to the criticism that the character wasn't black enough in the dailies and overcompensated. Does he look that black in your local paper?

Here's a link to the online version.

The Baron replied to Wandering Sensei: Moderator Man's discussion What Comic Books Have You Read Today?
"Over the weekend, I re-read the first ten volumes of Hakumei & Mikochi: Tiny Little Life in the…"
1 hour ago

Richard Willis replied to Jeff of Earth-J's discussion T.H.U.N.D.E.R. Agents
"FYI, I just noticed that the Two Morrows THUNDER Agents Companion was published in 2005.…"
1 hour ago

Jeff of Earth-J replied to The Baron's discussion Movies I Have Seen Lately
"GOLDEFINGER: Ditto."
2 hours ago

Tracy of Moon-T replied to The Baron's discussion Movies I Have Seen Lately
"As the guy who stole the plane said, "I don't like it." Well, dude, me either. …"
4 hours ago

Jeff of Earth-J replied to The Baron's discussion Movies I Have Seen Lately
"THEY (1974): "A group of campers in the Canadian wilderness begins to hear strange reports…"
4 hours ago

Fred W. Hill replied to Jeff of Earth-J's discussion The Pre-Defenders
"Ah, I forgot that little detail.  Considering that when Subby & the original Human Torch…"
6 hours ago

Richard Willis replied to Steve W's discussion A Cover a Day
"It turns out that I have three covers left, not two. So I'm posting today after all."
6 hours ago

Richard Willis replied to Steve W's discussion A Cover a Day
"The short red hair is a tribute to Mia Farrow in Rosemary's Baby."
6 hours ago