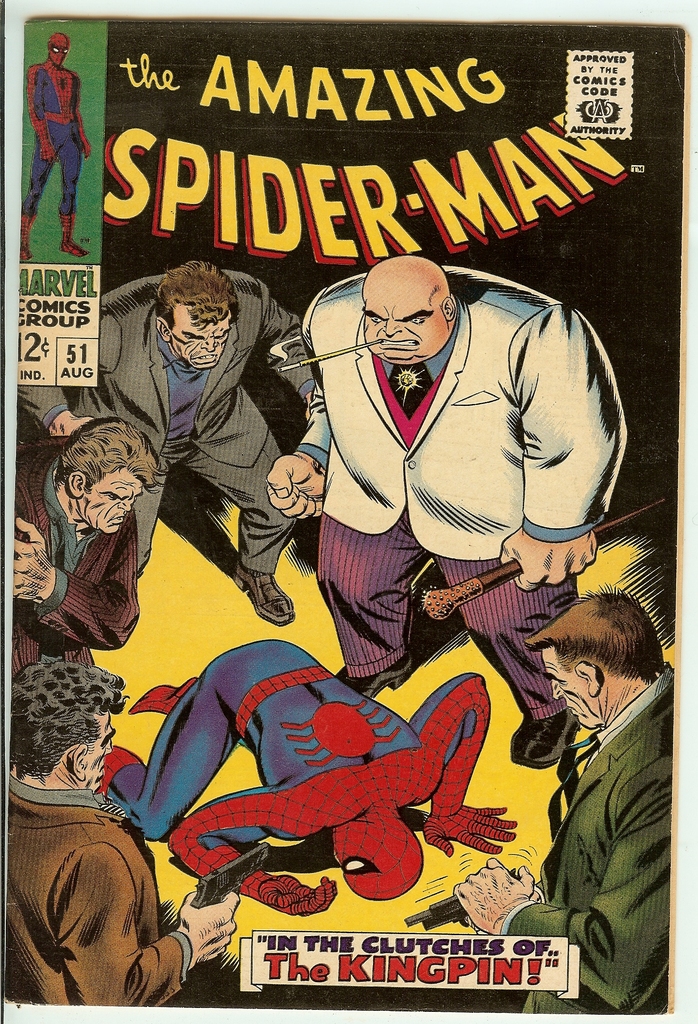 “In The Clutches of...the Kingpin!”

Refreshingly we see that Spider-Man is still struggling against a crime-wave that hit the city while he gave up being our hero in the last issue and the big bad Kingpin acts against our reinvigorated star and his critic J Jonah Jameson.

Jameson has also been verbal in his newspaper about the negative effects of such crime in the city, ole’ Kingy doesn’t like that.
Spidey battles the massive yet powerful and fast Kingpin one on one and actually well...loses.
We end with a tied together JJJ and Spidey about to drown as the bad guys appear to have won!

Joe Robertson appears for the first time too and Frederick Foswell is back (of course you remember the ‘Big Man’ don’t you?)

In view of the watershed moments of the last issue and this with a quite palpable ‘new phase’ being entered by Spidey, I expected the relationship with JJJ to mellow from this story onwards as surely JJJ will respect Spidey much more as clearly he can see our hero is not a villain and is trying desperately to help.
It doesn’t happen and the relationship remains defined as it always has been- in fact JJJ is remarkably manic and almost slapstick here.

I could have accepted the over the top behaviour, if it was the last of his excesses but in view of the fact that this does not represent any great understanding reached between them, this is almost painful.

Art is beautiful, large and bold.

The splash page of the Kingpin smashing a model of the city is typical of memorable images of the day.

Romita’s Spidey is powerfully built and adult sized, measuring up quite evenly against contemporaries like Captain America or Daredevil and that is one of the reasons why

I adore this period of ASM
The best phase begins when Doc Ock turns back up in #53...but until then we’ve still got to finish this set piece with the Kingpin.

Can Spidey escape from certain doom...?

I do agree Jeff. ASM#39 is where 'my' interest really begins.

I thought I had read lots of comments about those early Romita issues though (and the Annual guest-starring my favourite Avengers) so thought I'd start this thread with #51.

I am looking forward to the amnesia/Doc Ock issues and the 'tablet' epic soon...

I agree that Romita's version of Spider-Man is more appealing to the public than Ditko's. As for Ditko's Spidey being scrawny, I think the point was that the radioactive spider-bite gave him his strength. He didn't get it by going to the gym every day. There are real people in the world who are strong without obviously bulging muscles.

ASM #51 was the second appearance of the Kingpin (#50 was the first). IMO Kingpin is the best villain from Romita's run. All of the classic baddies were designed by Ditko.

I wasn't necessarily meaning Ditko regarding scrawny but more the modern comics as they seem to try to accentuate the teenager and in my head Peter is way past that.

I agree that Romita's version of Spider-Man is more appealing to the public than Ditko's. As for Ditko's Spidey being scrawny, I think the point was that the radioactive spider-bite gave him his strength.

Yes, I know. And I never liked the Rhino. 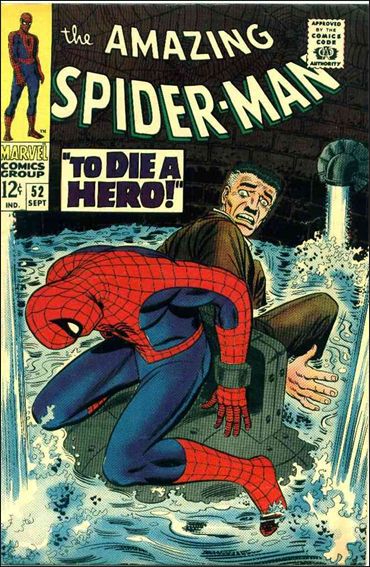 Note to current artists – you can draw a poster-like cover while still depicting an event from the issue!

Beautiful cover with real menace and sense of action.

Inside and the unconscious Spidey is tied to the babbling manic JJJ in the centre of a basement being gradually but relentlessly flooded around them...

Spidey awakes and saves the day by weaving an airtight bubble of webbing around themselves before the room is drained and they escape the Batman-trap.

It’s pushing it a bit – airtight webbing? – but it is dramatic and satisfying.

Spidey fights the bad guys and JJ runs off …only to knock himself out.

Frederick Foswell stands up to the Kingpin because, despite his history as the ‘Big Man’, “cold-blooded murder just isn’t my style!!”

Spidey battles the powerful Kingpin again while Jameson wakes up.

The dripping water on JJ’s head making him think he was bleeding is a wonderful; sequence that whilst humorous is not actually played for laughs.

Foswell is shot in the act of helping Jameson escape – thus becoming the titular character who is “ To Die A Hero!”

The story ends with Spidey looking on as Jameson continues to distrust Spider-Man and the Kingpin has escaped to fight another day.

We also get a  return from the front line in Vietnam of Flash Thompson, fawned over by both Mary Jane and the , still quite angularly drawn Gwen Stacey. Flash is surprised to hear how popular Peter Parker seems to be whilst no one seems particularly surprised that Flash has got time off from military service he’d only just left to join hadn’t he..?

In a way this wrapped up ASM’s first half-century phase, helping to tie up all loose ends from earlier issues, redefine who everybody is and what their motivations are and launch Spider-Man onwards….

We are informed at the close that ‘Our next bombshell issue features the incredible villainy of…Doctor Octopus – Nuff Said? ….

Regarding Spidey’s rouges gallery, Ditko may have created (or co-created) the lion’s share, but I think Romita improved upon them in every case. The ones Romita did create (or co-create) aren’t as well remembered, but I think lesser artists (and writers) who would reuse them in the years to come, didn’t use them to their full potential. The Shocker, for example, came to be seen as something of a joke by the ‘80s, but there’s nothing “jokey” about his two earliest appearances.

And, yes, Romita’s covers during this period were spectacular. Part of the problem (I have heard) concerning current covers not being as effective as those of the Silver and Bronze Ages is that the covers must be prepared so far in advance of the contents of the issue itself for solicitation purposes.

I agree about the Shocker - he had real potential.

Glad to have you aboard this thread too Jeff.

Thanks. Sorry I missed the Invaders one. That's one of my favorite series, but I don't know it as well as I do Spider-Man or Avengers, and really needed to re-read it. Plus things were going on in my life, both personally and professionally, that limited my participation (and reading) at the time.

Mark Sullivan (Vertiginous Mod) replied to Eric L. Sofer's discussion Are any new books worth it?
"I don't buy monthly books anymore, so I can't help. But welcome back!"
19 minutes ago

Eric L. Sofer replied to Randy Jackson's discussion The List of Superhuman Characters who Can Split into multiple versions of themselves or multiple physical people
"Hmmm... What about Captain Marvel? No, not him - the "SPLIT!" Captain Marvel. Eclipso…"
20 minutes ago

Eric L. Sofer replied to Randy Jackson's discussion The List of Superhuman Characters who Merge Together
"Unless I missed it, how about the Eternals forming the Overmind? Robby Reed occasionally dialed H…"
36 minutes ago

Ahh, good to be back.I haven't bought ANY new comics three or four years, and only a bare few then,…See More
1 hour ago
1 Comment 0 Likes

JD DeLuzio replied to Jeff of Earth-J's discussion Sandman (TV)
"Some additional thoughts: -The casting of Cain and Abel makes sense if you consider the pre-DC…"
3 hours ago

Jeff of Earth-J replied to Jeff of Earth-J's discussion Dark Shadows
"Tracy is becoming increasing frustrated with Jeff Clarke at this point (626). "I'll…"
3 hours ago

Jeff of Earth-J replied to Jeff of Earth-J's discussion How Many Versions Does One Man Need?
"Yeah, I saw that, too. This is a reprint of two b&w serialized stories I already have in…"
3 hours ago

JD DeLuzio replied to Jeff of Earth-J's discussion Sandman (TV)
"I'm a huge fan of the graphic novels, while my wife has never read them. We both liked season…"
3 hours ago

The Baron replied to Jeff of Earth-J's discussion How Many Versions Does One Man Need?
"See, I sae this, and thought "Jeff?" PLANET OF THE APES ADVENTURES: THE ORIGINAL MARVEL…"
3 hours ago

Jeff of Earth-J replied to Jeff of Earth-J's discussion How Many Versions Does One Man Need?
"Okay, I manage to give a pass to the Warlock Gallery Edition, then Marvel goes and solicits…"
3 hours ago