My first Spider-Man comic book was issue #73 (and I can hardly wait until we get to that point of the discussion!). My second was issue #41 (as reprinted in Marvel Tales #30, but acquired some years after its initial release as a back issue). To this day I own very few copies of early Spider-Man comics, but I have a complete run of early Marvel Tales. For me, the question of Spidey’s best villains was never between the Green Goblin and Doc Ock, but between the Rhino and the Lizard. I bring it up today because the first Ka-Zar story I ever read (from Spider-Man #58) was reprinted in Marvel Tales #30 as well.

As I would learn a few years later, #58 was printed out of order in MT continuing from Ka-Zar’s own short-lived (three-issue) series which reprinted his own early adventures, and which left off with the cliffhanger of SM #57.

Of course, back then I pronounced it kuh-ZAR.

Marvel Tales had some pretty good original covers back then.

This was a great time for covers. Both of those are by Marie Severin, who was doing lots of covers for Marvel then.

Very unusual that the Marvel Tales is a continuation of the Ka-Zar issue, continuing both the Spidey meets Ka-Zar story and the Angel vs. the Dazzler story. At this time Marvel seemed to be really going somewhere and dragging you along for the ride. That's been the problem in recent years. They're definitely going somewhere now but we're not eager to see where they take us like we were then. 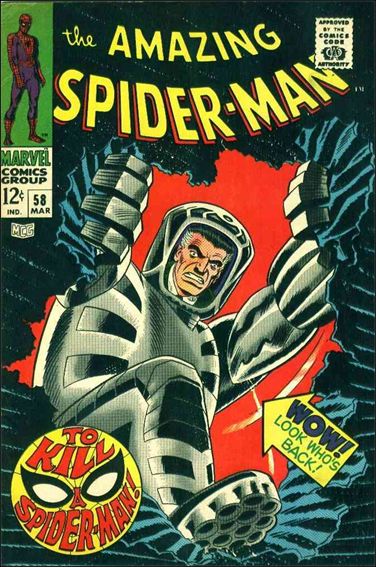 Well, not the most original of titles eh?

How many comics could carry a cover without the title character on it?  It obviously helps that the title gets presented as a spidey-signal and that Spider-Man is on the masthead but it’s interesting the action does not require his presence to be powerful and recognisable.

That’s alright then…we’d all worried all month for nothing…!

Not only does Spidey recover but “I can remember now! My amnesia is gone!”

In the space of three pages our web-crawling status quo that has been so upset in recent issues – is back to normal.

Following on from that update we learn that J Jonah Jameson is plotting with Professor Smythe  another robot to defeat Spider-Man,  John Jameson and Captain Stacy come to an understanding, Gwen and Harry visit ailing Aunt May in hospital and remind us that Peter Parker is still missing.

It’s a soft focus fade out for Ka-Zar that seems odd as he had such a dramatic entrance into the story.

Betty Brant and Ned Leeds discuss their upcoming wedding.  If I remember rightly this is one very long engagement…!

Eventually the JJ controlled Spider-Slayer finds Spider-Man and a battle ensues. Moving us on from what could have been a predictable battle, Professor Smythe wrestles control from Jameson and is determined to defeat our hero himself... “You just want to kill him…for personal revenge!”

The spider-Slayer chases Spidey who keeps running until the robot explodes!

We learn Spidey had lured the robot to a lab full of spiders which overloaded the spider-sensitive power input of the Slayer robot and destroyed it!

Our hero wasn’t running scared he was running smart!

As JJ faces another defeat and throws Smythe out Peter  runs into the street to go visit Aunt May…only to run into Ka-Zar and Zabu. Ka-Zar believed he sensed Spider-Man’s ‘aura’ but having found only Peter he turns and leaves…and so do we.

It is a strange short story here, the new look Spider-Slayer never really gears up against our hero and Ka-Zar is sidelined significantly. The amnesia plot is dispensed with but not really replaced with anything and as a bookend to the  continuing saga that kind of began in #53 it’s a bit of a soft ending almost as if - dare I say it – Stan Lee forgot what he wanted to do or couldn’t think of a better idea at the time.

Still, Spider-Man is back, Peter is back, all the players are back on the board where they should be.

The art is still glorious, the assistance from Don Heck is not ruining Romita’s breakdowns at all and the Slayer is imposing enough to rival even the depiction of Ka-Zar.

A tad worrying though, as it appears there was little appetite left for amnesia – is the next issue box “Prepare to meet –The Brain-Washer!”

- isn’t that a little too much like amnesia to be very fresh? We’ll have to wait and see…

Maybe Stan just got sick of the whole amnesia thing and didn't feel like resolving it. Or maybe there should have been a line that Spidey hit his head on something in the water, which natually restored his memory, only Stan forgot to pencil it in.

As I remember Smythe wasn't a bad guy in his first appearance but by his next appearance after this one he was completely insane.

Permalink Reply by Richard Mantle on February 3, 2015 at 12:41pm
They did say Ron, that the water revived his memory - it's just that it all seemed a bit anti-climatic.

I think they'd run with it as far as they needed to, so it was discarded in favor of moving the ongoing story forward.

So all he had to do all this time was get somebody to throw water in his face?

I thought the more-conventional appearance of the spider-slayer in this issue was a real let-down from the original Ditko designs. They were something we'd never seen before.

It's long gone now but I had this issue as a kid, and except for the cartoon show it was years before I saw the original, so this is the spider-slayer I remember. Thought the "it'll work better if it was shaped as a giant spider" idea coming up later was disappointing. I did like the wacky ending in the first one. "Mr. Jameson! What have you do to his head?!?" "Nothing! He...hasn't got a head!" Surprised the Code didn't say that scene would scare kids.

I've been working on a run of Amazing Spider-man. So I've been following this thread from time to time. I'm down to about 27 issues needed, many from this era. The Romita covers are some of my favorite. My copies are lower grade but the covers still pop to this day, especially under the mylar bags.

I haven't read many of these as I was waiting to get more of a set together, so I've been avoiding spoilers even if it took place many years ago.

I was collecting Marvel Tales in the 1980s when the Lee/Romita stories were being reprinted.  They stopped ASM 50, reprinted in MT 190, but a few months later, the reprints resumed in a digest called Spider-Man Comics Magazine.  I wasn't a fan of the smaller sized digest, but at least I was able to read these stories for the first time.  Unfortunately, ASM 57 and 58 were skipped over for reasons unknown to me.  I didn't get to read them until I bought Essential Spider-Man Vol 3.

I'm not a big fan of #57, mainly due to not being a big Ka-Zar fan and by this point the amnesia subplot has really been stretched out.  If there was a resolution planned out in advance to it, it was forgotten along the way.  Oh the irony!

ASM 58 is a lot better, although Pete should be a lot more concerned about Aunt May's whereabouts, considering the last time he saw her she had fainted during his battle with Doc Ock.  I laughed at JJJ being concerned with Smythe wanting to kill Spidey - Smythe was right about him being a hypocrite.  JJJ just wanted him arrested?  Was he even wanted by the police at this point?

I remember they reprinted all of Ditko's stories, but skipped around with Romita then jumped to Kane. Somehow they reprinted Spider-Man#70 or 80 something to 99, jumped to 103, then finally went back to reprint #100-102 years later.

The Baron replied to PowerBook Pete, the Mad Mod's discussion Anything, Everything, or Nothing At All
"Ah, Marcus Welby and Spock's mom."
14 minutes ago

Lee Houston, Junior replied to Steve W's discussion A Cover a Day
"And now, a couple of more Adams' Arrow variants. (Images courtesy of the Grand Comics…"
38 minutes ago

Philip Portelli replied to PowerBook Pete, the Mad Mod's discussion Anything, Everything, or Nothing At All
"I've done something similar like reorganizing my collections. To no one's surprise here,…"
49 minutes ago

Commander Benson replied to PowerBook Pete, the Mad Mod's discussion Anything, Everything, or Nothing At All
"The GMB experienced those same feelings of worthlessness.  So, she threw herself into running…"
53 minutes ago

Philip Portelli replied to PowerBook Pete, the Mad Mod's discussion Anything, Everything, or Nothing At All
"I understand. I've been a burden to my family these last two years, stretching out my stimulus…"
1 hour ago

Commander Benson replied to PowerBook Pete, the Mad Mod's discussion Anything, Everything, or Nothing At All
"It's been irritating, but we've always been pretty confident that her disability will…"
2 hours ago

Philip Portelli replied to PowerBook Pete, the Mad Mod's discussion Anything, Everything, or Nothing At All
"Thanks, Commander! All the best wishes to Mrs. Benson! I know how frustrating it can be!"
2 hours ago

Philip Portelli replied to Steve W's discussion A Cover a Day
"Neal Adams did a series of covers for the Tarzan paperbacks re-issued in the mid-70s."
2 hours ago

Jeff of Earth-J replied to Steve W's discussion A Cover a Day
"There are still scores of Continuity Comics covers yet to be posted. You anticipated me. Of…"
3 hours ago