I laughed at JJJ being concerned with Smythe wanting to kill Spidey - Smythe was right about him being a hypocrite. JJJ just wanted him arrested? Was he even wanted by the police at this point?

Without rereading everything up to this point, I think JJJ thought of himself as a good person and wasn't willing to face the fact that any one of the many times he sponsored attacks on Spidey by Smythe, the Scorpion et al could have resulted in his death.

I think he eventually convinced himself Smythe and the Scorpion were Spider-Man's fault, not his.

Marv Wolfman made that clear to me in an '80s storyline where Smythe shackled Jameson and Spider-Man to a bomb and they spent a whole day criss-crossing town trying to figure out how to get it off without triggering it. The conclusion had Jameson admitting to himself that he's so aggressive about tearing down Spider-Man because he can't admit to -- and let the world see -- that J. Jonah Jameson "is a weak and ordinary man."

A brief return to his confession in #10. 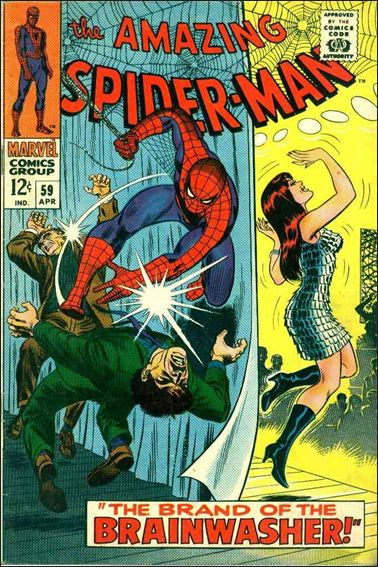 “The Brand of the Brainwasher!”

Clever split cover with backstage Spidey and front stage MJ. Beautiful MJ in that fantastic dress just to show Gwen hasn’t necessarily eclipsed her completion in these pages yet.

Depressing is the lackluster storyline going by the title alone…Brainwashing? We’ve just finished a storyline where Spider-Man had his brain so thoroughly washed he couldn’t remember anything now we’re going to get more mind messing going on? It was a big thing in the 60s but this is beginning to show a lack of ideas in the house of ideas.

We start the inside with Spider-Man on the run from the Police and Peter Parker finally visiting Aunt May.

This appears to brighten May up and reminds Peter he’s officially a missing person.

We get a dramatically happy reunion between Peter and Gwen and then the rest of our supporting cast returning everything back to the status quo.

Then we move into this issue’s real storyline as we meet the only-seen-in-shadows Brainwasher who is planning on using our Mary Jane to take photographs of clients at a nightclub to then hypnotize those clients into doing his bidding.

MJ does her dance thing and our supporting cast well, support until Captain Stacy gets photographed and enters the lair of the bad guys...

Spidey steps in, saves MJ and finds Captain Stacy being brainwashed only to discover at the close of the issue that the Brainwasher is…the Kingpin!

Why was the Kingpin trying to hide his identity – other than dramatic effect?

If brainwashing wasn’t too groundbreaking a storyline then the Kingpin as the bad guy was hardly inspired either.

Romita’s art is beautiful, the characters are all well rounded and interesting but the plot feels like a retread and we appear to have a battle between Spidey and the Kingpin to look forward to next issue…kind of seen that before too haven’t we…?

This story was adapted by the original Spider-Man cartoon, except they made MJ blonde and established Captain Stacy was her uncle, merging her and Gwen into one ditsy bubblehead.

I've heard it said that the Master Planner was originally NOT supposed to be Doc Ock and that in the first reveals the artwork was tweaked to change him to Doc Ock. Does this seem to be true and, if so, what was Ditko's original intention?

I think he was first revealed to be Doc Ock on the second page of #32. The page can be seen in the issue preview at Marvel's website. He had not been seen in that costume previously, and was slimmer and more muscular than before. But Ditko was plotting the title at that point; Lee would have had to send the pages back to him to get the issue's climax (the Spidey/Doc Ock fight) changed, and that sounds unlikely. I can't remember if Doc Ock was seen in silhouette earlier in the storyline.

It's an important point that this is Peter's first face-to-face meeting with Captain Stacy. He had only heard of him from Gwen previously.

Also, in-story it is said that a deputy district attorney was hypnotized into freeing "dangerous mobsters" on bail. A deputy D.A. could recommend bail and bail amounts but a judge doesn't rubber stamp it. They really should have hypnotized the judge. Also, which judge?

I think he was first revealed to be Doc Ock on the second page of #32, and the page can be seen in the issue preview at Marvel's website. I can't remember if he was seen in silhouette earlier.

In Amazing Spider-Man #30, the story about the Cat Burglar (aka the Cat) the Master Planner's gang is first seen and in dialogue they are mistakenly said to be working for the Cat, which makes no sense. The Cat works alone and lives alone in a modest apartment. He doesn't have the resources needed to run this large costumed gang. One of the gang is even seen to be thinking that HE made the plan that Spidey is disrupting. There is another reference to the Cat being in charge of the costumed gang after a non-costumed gang is caught by Spidey. They were apparently working for hire by the Cat (actually the Master Planner, a name that's never used until ASM #31). Lee and Ditko were practically on different planets at this point.

In the first part of the trilogy, ASM #31, we only read word balloons of the Master Planner over his under-water headquarters. Not even any silhouettes. As you say, he is revealed to be Doc Ock in four panels immediately after the splash page of ASM #32. To me his mechanical arms seemed incidental, like they were added as an afterthought to these panels. I also think his face and haircut don't look much like previous Ditko depictions of him.

On page 8 of the same issue the arms still look incidental and his face and haircut still don't look right. On page 14 we finally get the face and haircut of Doc Ock along with a panel showing his mechanical arms actually doing something, After that it is obvious he was drawing the original Doc Ock with just his goggles and costume drawn to match the artwork earlier in the issue.

It really looks like the art for the first half of the issue was received and either rejected or rethought by Stan. I understand they had some ghost inking going on (Carl Hubbell?) and suspect he changed pages 2 and 8 to make the Master Planner look like Doc Ock. I can't find any more info about this and we'll never get it from Stan or Steve.

The story seemed to switch gears a couple of times before Doc showed up. Wasn't Ditko refusing to speak to Stan at all by that point?

It didn't bother me that the Brainwasher turned out to be the Kingpin and not a new character.  That whole bit takes a back seat to the rest of the issue, imo, because there's so much going on.  This is a period when the title is at its best with the subplots moving forward or being resolved, and new ones beginning.  For example:

- May's health scare is pretty much over, well at least until she gets the bill for repairing the hole in the side of the house!

- We get the start of the Gwen and Peter romance, as she is overjoyed he is alive and well and kisses him (first time?).

- Solid character development for George Stacy, who rightly pinpoints what type of person is under the Spidey mask, younger and highly intelligent.  He says he has seen all known film of Spider-Man, stands to reason he knows Pete has taken a lot of photos of Spider-Man, and knows there is a connection.

- Pete and Harry make up after some earlier friction. BFFs again!

- MJ as a go-go dancer was a sequence really of its time.  The club being run by mobsters and visited by politicos and cops - was this a G rated strip club?

- MJ's boss really looked like Fred Foswell, I did a double take when I read it earlier tonight.

- Surprised no followup on JJJ from last issue.