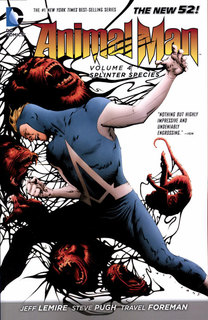 The Rotworld event is finally over. It leaves Buddy Baker alone: his son Cliff has died, and his wife and daughter have abandoned him. The Annual 2 story that opens this collection is an elegy to Cliff. It shows father and son in happier times, and Buddy revisits a being who can give him one of Cliff’s dreams to remember him by. Nice to see original series artist Travel Foreman back for this story.

The second story revisits Buddy’s movie role in “The Return of Red Thunder,” again illustrated by John Paul Leon, who does not get a cover credit for some reason. This is “Tights, part two” which continues from an issue earlier in the series.

The title arc picks up with Buddy in the news for that Best Actor nomination, along with the death of his son. He finds himself hounded by journalists, his every action questioned as a possible publicity stunt. He tracks some missing animals to a bizarre cult called “splinterfolk” who are trying to physically transform themselves into animals. Meanwhile Maxine has accepted her role as queen of the Red, and travelled there to attempt to bring Cliff back (behind her mother Ellen’s back). Just when it looks like there may be some resolution, a new attack on the Red begins. Brother Blood feels he was passed over as rightful avatar of the Red, and has come to make things right.

Disappointing not getting much resolution in this collection. But I was surprised to find that Brother Blood was a legitimate threat. He certainly looks like a crazy wannabe at first. Knowing that the series concludes with issue #29 in the next collection feels a little like cheating. No matter how complicated things look now, I know the end is coming soon!