And I did buy some comics. If you zoom in on the Dennis the Menace comic, you can see the publisher name. It's a January 1975 issue.

This Den of Geek article is exactly a month old. I just got around to reading it. It explores how they retconned Ricardo Montalban's Khan into a bigger deal than he was originally.

For some reason, in Star Trek the Motion Picture they decided they couldn't have the colorful uniforms from TV. So, they had everyone in white pajamas! This one had everyone in very military-looking red and black, but without the color distinctions of major categories of specialties. Not as bad a decision, but better came later.

The Long Story of the Roger Corman Fantastic Four

How the 1994 Fantastic Four Movie Lived On (Despite Marvel’s Plan t...

Somehow I completely missed that this happened. Fascinating story of a train wreck that never happened.

As a Canadian, however, I want to correct an error:

Smigel, a veteran Saturday Night Live writer and creator of Triumph the Insult Comic Dog person hired to rip off Ed the Sock, then wildly popular in Canada. The Sock's big break into America, an appearance on Conan O'Brien, was cancelled at the last minute. A short time later, CO'B introduced Triumph. Different puppet. Same cigar, personality, and voice. Less intelligent version of the same shtick.

I recall at the time that the movie was proposed and later that it was killed, but I never knew all this detail. This is what fans complain about when they say Hollywood doesn't respect the source material.

I used to think fan complaints couldn't get a project killed, but now I'm a believer, and I wish it had happened more often. Like with Johnny Depp as Tonto in The Lone Ranger. Or Seth Rogen as The Green Hornet in The Green Hornet.

Today is Tracy's birthday and she wanted to go antiquing (for the first time since pre-COVID times) so we spent four hours at the 61,000 sq. ft. store in Ft. Worth. Several of the vendors had comics (the usual '90s fare, mostly), but the most amusing was the one with stacks labeled "Silver Age" and "Bronze Age" comics. (Tracy snapped a photo.) 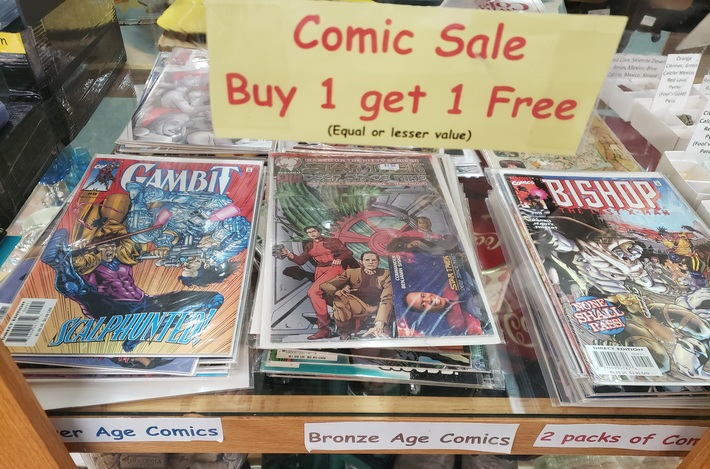 Some of this history was mainstreamed for many people by Christina Baker Kline's 2017 novel Orphan Train, which is a good read, though anticipate something that leans into YA.

"What's true but hard to admit is our morbid fascination with geologic catastrophes as well as destructive weather systems. They're all things of beauty--perhaps even an entire category unto itself; something to behold and admire, but only from a safe distance, although some people ignore the safe distance rule. How else do you breed 'storm chasers' and death-wish meteorologists who report live from the docks while catastrophic storms batter the shoreline, drenching themselves and whoever was volunteered to hold the video camera that day."

The Baron replied to Jeff of Earth-J's discussion To be... HULK-inued!
"I've always been uncertain what, if anything, Banner remembers from his time as the Hulk. If…"
50 minutes ago