It's still going. It's been sanitized a bit (I once owned a paperback collection of some of the older comics--they wouldn't fly today) but it's usually worth a small chuckle.

Because no one asked for it, and because I've come down with some kind of illness, here's another such list:

-With the help of his brother, folk singer Woody Guthrie descends at night in a shocking one-piece bathing suit.

-After a mutant-hating blacksmith channels ancient energies to transform himself into a champion high-school baseball team, a long-buried secret leads him to Elsa the lioness in New Hampshire

-Perseus, the son of Zeus, must cut his way through a team of assassins in ancient Egypt

-After a nuclear holocaust, four women have strong opinions on a waitress with a boorish fiancé

-A mail-order bride fails in love with Alcoholics Anonymous

Permalink Reply by Doctor Hmmm? on February 12, 2018 at 7:12am
Half of those sound like just another day at the office on the SyFy Channel.

They appear not to have done much research.

"A cyborg from the future, sheltered by her sleazy mother, vows to help Loyalists rid the basement of space aliens with a kooky girlfriend."

Yeah, I guess you're right.

Half of those sound like just another day at the office on the SyFy Channel.

It's a fun list, JD. The first one sounds especially viable.

They appear not to have done much research.

NBC does a better job.

Oddly, the first story is from an NBC affiliate, and my first impression was that he was claiming to have created the Black Panther. Incoherent.

And they're sticking with their earlier story: 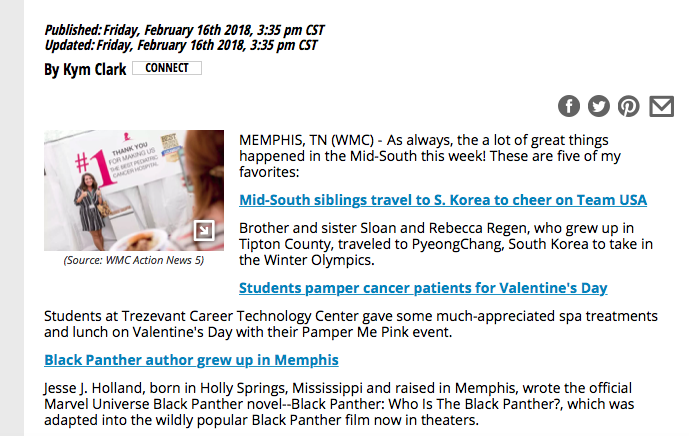 WREG-TV in Memphis shares a story from a Maryland station about Jesse J Holland. Meanwhile, WMC-TV packages their erroneous story.