As I've explained elsewhen, when I got the book Science Fiction Movies by Philip Strick I tried to identify a movie I'd seen on TV and decided it was Frankenstein Meets the Space Monster. But I had doubts even at the time, and I now think that's unlikely. I still want to know what it was.

What complicates things is I've reread what Strick has to say about that movie and I can't for the life of me remember what points of similarity I thought I saw. That means I can't pin down what I remembered at the time about the movie. I think it must have had an astronaut or astronauts in it, but I can't remember or establish anything else about it.

So I've been trying to identify it using the TV guide from a newspaper archived online. It started to carry a guide in late 1975, but that might be early enough, as I was only six then.

I was already a fan of Thunderbirds when I was six - I know that because I was given a Thunderbird 2 toy for my seventh birthday - but I think my interest in SF as a genre crystalised in 1976-77. Strick's book was published in 1976, but I don't know at what end of the year, and I have an idea I got it because it was reduced for sale. So my guess is I got it in 1977 or 1978.

So I've done name searches for all the films from Wikipedia's lists that seem to be possibilities, and put together a list of the ones that were reportedly broadcast in 1975-77 and in the next few years (on the theory that my net might miss the broadcast I saw but catch a subsequent appearance).

The listings for 1975-78 yield seven possibilities:

The Wizard of Mars

and a few more I've excluded as they seem to have only appeared in evening or overnight slots in that period. I've seen 12 to the Moon and The Wizard of Mars, but I remember so little of the film I don't trust myself to recognise it. I briefly thought it was First Man into Space, as its plot resembles what I thought was the plot before I decided my recollection was corrupted, but I don't remember being scared by the movie and I think it would have scared me when it was broadcast.

The Wikipedia lists are pretty good, but are missing some things: Terrornauts is missing from the 1960s list, Stowaway to the Moon and TV films from the 1970s one.

This is another title that over-promises, but I thought you'd be interested.

Re. Horror from Beyond (above): I think the plot description is a conflation from two movies. Hence the jump between the sentences. The "It continues to grow" part sounds like X the Unknown. I don't know what movie the first part goes with.

The other listing's description of "The Creeping Flesh" is off too, but that film does have scientist brothers.

This post displaced the thread Is "Carol Marvel" Really Successful? from the homepage.

Was Brave and the Bold #28 the first time Aquaman was on the cover of a comic book? 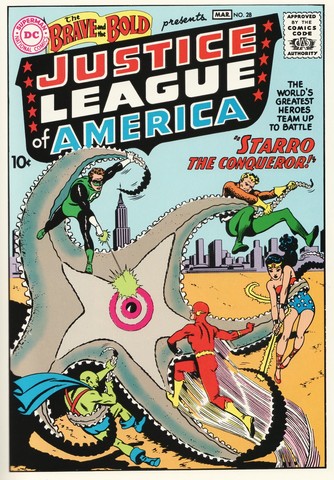 He was mentioned on the cover of Adventure Comics #103, April 1946, when a number of strips moved over from More Fun. 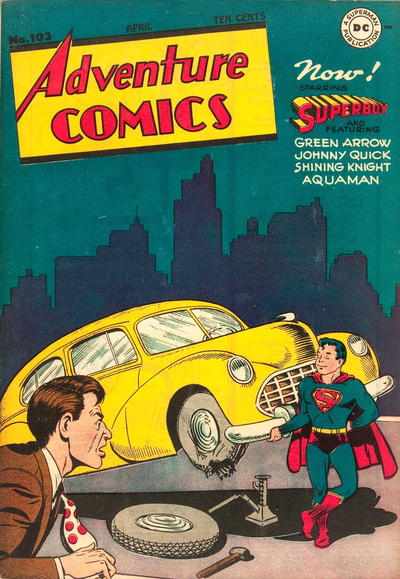 MESSAGES LEFT ON MY ANSWERING MACHINE RECENTLY: All of these were left by an eerily similar computer-generated female voice.

“We are calling you from investigation team of IRS. We have just received a notification regarding your tax filings from the headquarters which will get expired in next 24 working hours and once it get expired after that you will be taken under custody by the local cops, as there are four serious allegations pressed on your name at this moment. We would request you to get back to us so that we can discuss about this case before taking any legal action against you. The number to reach us is 516-499-7628 I repeat 516-499-7628. Thank you.”

I’d be tempted to call one of those back just to hear what they have to say, but none of those numbers are “toll free.” Besides, they’ve probably all been disconnected by now.

I knew that Aquaman was never on the cover of More Fun Comics but thought he might have gotten at least a headshot in either Adventure or World's Finest.

It's quite possible that young readers might not have even known who he was when B&B #28 came out.

I used to get #3 a few months ago and am still getting #1 now, Both upset my mother terribly as she thought that I was really in trouble even though no name is ever mentioned and that's not how the IRS works! And that any notice about the computer would be sent through the computer!