There is a slightly rundown cheap traditional diner downtown. I don't go there often, but I happened to be in the area during a warm snap last week, and decided I wanted a milk shake.

They still have the framed Pulp Fiction poster near the cash that someone put up in the mid-1990s. It has faded considerably.

I looked up at it as I paid for my shake.:

Your office is a lot neater than mine.

An article in the VFW Magazine from November 2017 (pages 28-32) all about comics and graphic novels related to war. It covers the 1940s to today.

What the 90s Batman Movies Tell Us about Hollywood

‘Brightburn’ Writers Don’t Want You to Side with Their Antihero

The Star Wars George Lucas Doesn’t Want You to See

I made some really good finds at Half Price Books yesterday.

STAR WARS PAPERBACKS: I got rid of my Star Wars paperbacks a long time ago. The first original one to be released after the movie was Splinter of the Mind’s Eye. That one was reprinted a couple of years ago. I bought and re-read it then and really enjoyed it. The next two were Han Solo's Revenge and Han Solo at Star’s End. I bought and read both of those, too, but by the time I went back to look for more, they were releasing them faster than I could keep up with so I stopped. I found the two Han Solo ones yesterday, like new, 4 bucks each.

THE ADVENTURES OF CAPTAIN MARVEL (1941): I have always enjoyed movie serials and I have many of them on DVD and VHS. I have always heard that The Adventures of Captain Marvel is one of the best ones Republic released. Yesterday I found one sealed for $4.99 (truthfully, Tracy found it). The special effects are really top notch, although they did take some liberties with the plot. So far I’m two episodes in (of 12).

The Captain Marvel and Spy Smasher serials are my favorites.

From an email from DC: 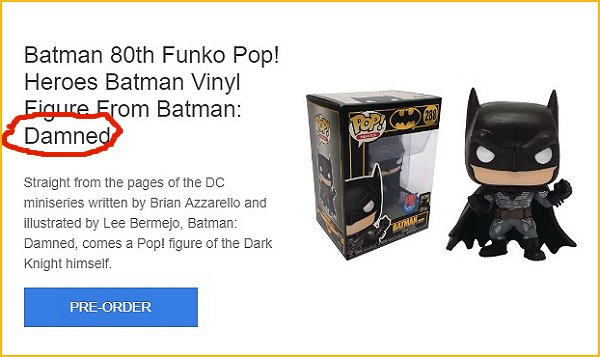 (I hope it doesn't offer attachments)

This reboot (a good one for a change) is a favorite of my wife and I.

Cancelled Netflix Show 'One Day at a Time" Gets Fourth Season in Cl...