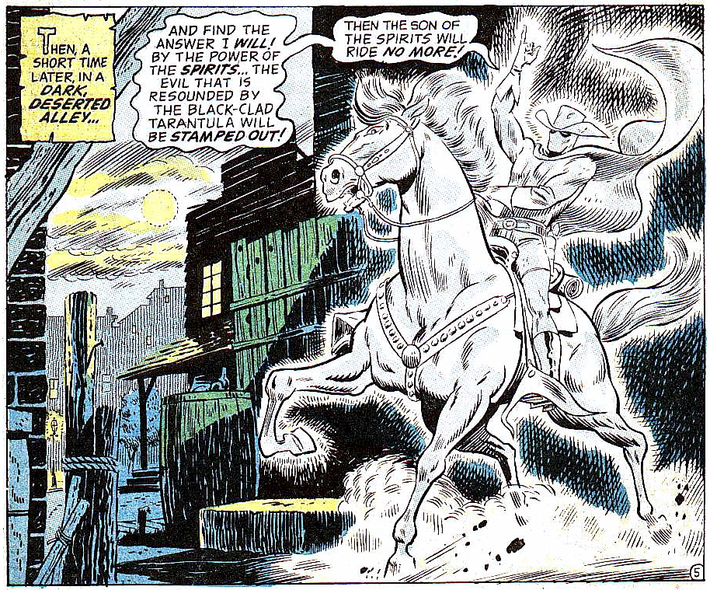 From Western Gunfighters #1 (1970), art by Dick Ayers and Tom Sutton. Isn't that a lovely panel?

Marvel's Ghost Rider first appeared in his own title in 1966-67. This and the successor series in Western Gunfighters #1-#7 were pencilled by Ayers, the artist of the Magazine Enterprises feature Marvel was imitating. Western Gunfighters was an anthology title, and the instalments there were mostly 10 pages. The Western Gunfighters name was recycled from a 1950s title.

The title of the Silver Age Two Gun Kid feature continued the numbering of a title that had run from 1948-49, 1953-61. Its hero was a gunslinger who wrote black. (There were a number of characters like this.) The Silver Age title appeared from 1962-1967, slightly outlasting Ghost Rider. So during the 1960s run of Ghost Rider Marvel had two masked gunfighters with double identities, and it abandoned them close together.

Two-Gun Kid was lawyer Matt Hawk. As a lawyer he defended the criminals he had caught, like Matt Murdoch/Daredevil, who debuted later. Note the reuse of the Matt name as well as that dubious trope. Marvel's Ghost Rider was schoolteacher Carter Slade.

In Western Gunfighters #6 Carter was killed, and in #7 his brother Lincoln, introduced the previous issue, assumed the Ghost Rider role. I think the idea there was to make the feature more like ME's original. Lincoln was a marshal in his other identity. ME's Ghost Rider had been marshal Rex Fury.

In the 1940s-50s Marvel had also printed many stories starring the Black Rider. He was not an imitation of ME's Ghost Rider but of the Durango Kid, a movie hero played by Charles Starrett who also starred in comics from ME. (Fred Guardineer drew many of these.)

The Black Mask name may have been a Roy Thomas nod to Redmask, the masked identity ME's version of Tim Holt used in Tim Holt. (Tim Holt was a movie star who appeared in A-pictures as well as B-Westerns. His comics' version's Redmask identity only appeared in the comics and was evidently based on the Durango Kid.)

I justice noticed the similarity between Marvel's Nova and the Nova identity Superman adopted in the imaginary story in World's Finest Comics #178, #180. Marvel's Nova was based on Marv Wolfman's fan character Black Nova, created in 1967. The World's Finest Comics story appeared in 1968. It might be a case of professionals homaging a fan creation.

The writer was Cary Bates, but that was the Mort Weisinger era at World's Finest Comics and the story need not have been his idea. The cover may have come first. It may even have been Wolfman's suggestion: his first DC work appeared at the same point. 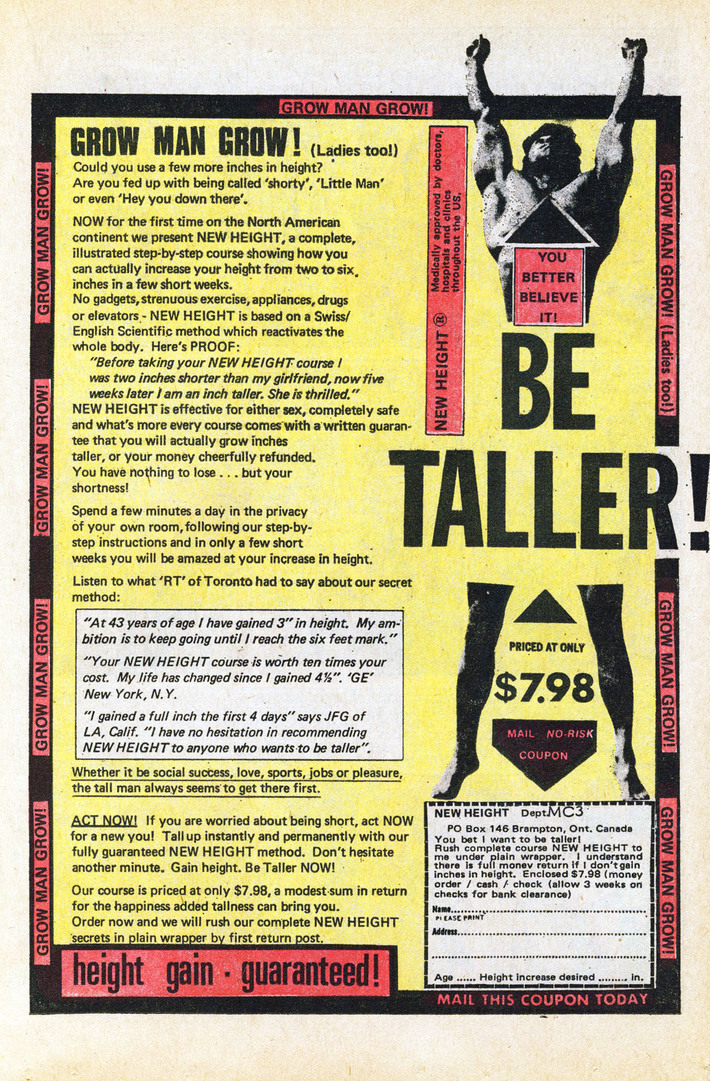 I doubt this product worked. From Western Gunfighters #8. 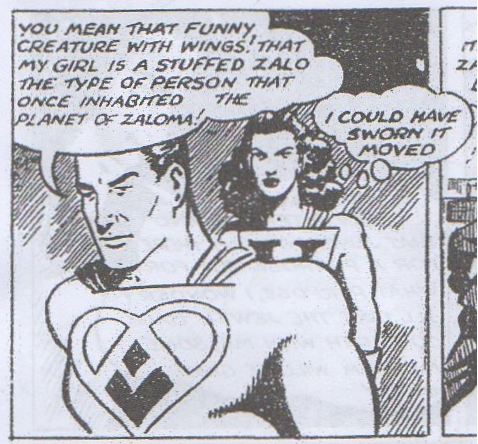 In the future, they'll stuff the bodies of aliens and put them in museums.

From Super Thriller Comics #23. (World Distributors, late 1940s. The issue can be found in the UK Comic Books > Foldes Press section at Comic Book Plus.)

Q: In what month do women talk less?

We've been watching "The Rifleman" and there are several gems like the one Jeff mentions above.

"Laugh it up, fuzzball."

Q: In what month do women talk less?

"Laugh it up, fuzzball." It's like Essence of the Psychedelic Era, industrial strength.

Here's an appreciation of the work of Carl Burgos by Michael J. Vassallo, posted as a 100th birthday tribute in 2016. It's packed with images, and the computer I'm using can't cope with it using Explorer, but Google Chrome works fine.

I remember that ad.

It's like Essence of the Psychedelic Era, industrial strength.