Everyone’s got questions about Riverdale, the new series premiering Jan. 26 on The CW, based on the enduring characters from Archie Comics. Here, then, are the answers:

Q: Some people refer to this series as “Dawson’s Creek meets Twin Peaks.” Is that accurate?

A: It isn’t just “some people” who say that, it’s Roberto Aguirre-Sacasa himself, a TV and comics veteran who is the Chief Creative Officer at Archie Comics and the creator of Riverdale. He told comicbookresources.com in 2014: “Something we talk a lot about is, ‘Imagine if Riverdale were like Twin Peaks, and was a really weird small town. But Twin Peaks had some very funny black humor stuff to it; obviously it was very serious as well. So that kind of balance is what we’re going to try to strike with the show.”

A: A little, yeah. It begins with the death of Jason Blossom, the fraternal twin of Riverdale High’s Queen Bee and resident Mean Girl, Cheryl Blossom (Madelaine Petsch). Much like Twin Peaks, Riverdale is going to be the ‘50s throwback town with dark secrets beneath the seemingly perfect surface. 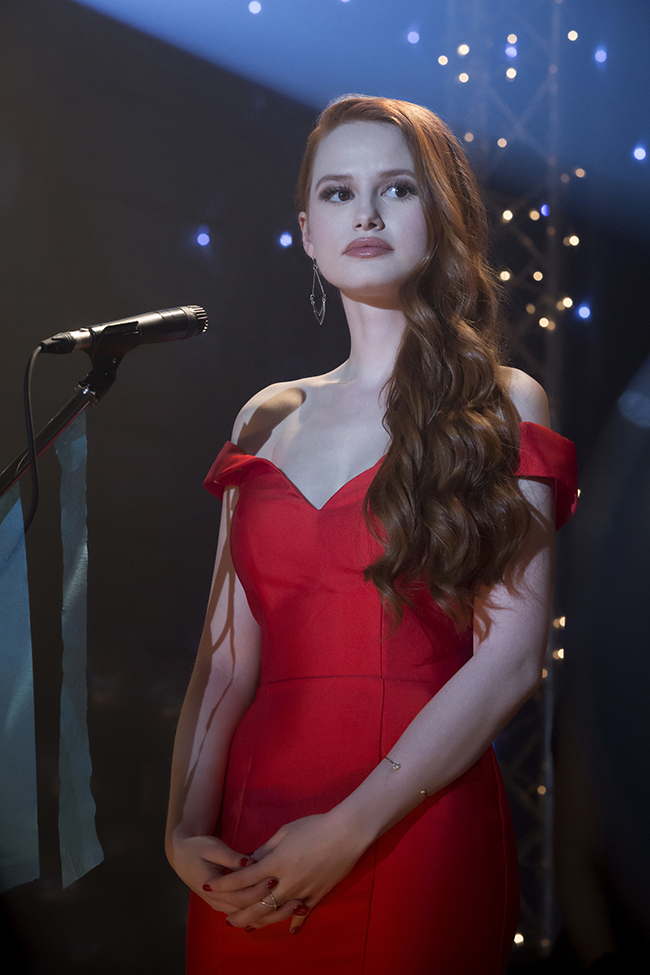 Q: Why do that? Why change these wholesome characters from our youth? Is nothing sacred?

A: Because the wholesome characters from our youth don’t sell well any more. I read them until middle school and then quit, and I bet so did you. And younger kids today are playing video games, not reading Archies. Up until recently, the Archie titles were selling in the low thousands.

So for the last few years, Archie Comics has been working to fix these problems by placing the gang in new situations – zombie-apocalypse-survivor Archie in Afterlife with Archie, grown-and-married Archie in Life with Archie, not-long-for-this-world Archie in Archie vs. Predator. The publisher  assumed affection for the characters would carry readers through, and it worked.

The core line of Archie books has been rebooted as well.  The new titles still feature a group of basically good (and funny) kids, but the humor is more sophisticated and the approach more modern. They’re written and drawn by mostly A-list talent, and appeal to older readers as well as their children.

Riverdale is just an extension of that game plan.

Q: Will I recognize any actors on this show?

A: Oh, sure. Most of the principals are essentially newcomers, but you’ll see Luke Perry of Beverly Hills 90201 as Archie’s dad, Fred Andrews. Molly Ringwald, who seemed to star in every movie John Hughes made in the ‘80s, plays Archie’s mother, Mary Andrews. Mädchen Amick, waitress Shelly Johnson at the Double R Diner in Twin Peaks, is Betty’s mother, Alice Cooper. Cole Sprouse, of Grace Under Fire, plays Jughead. Shannon Purser, who played Barb on Stranger Things, is “Big” Ethel Muggs. Sarah Habel, who plays Miss Grundy, was in Hostel: Part III, which makes her sorta famous, I guess. 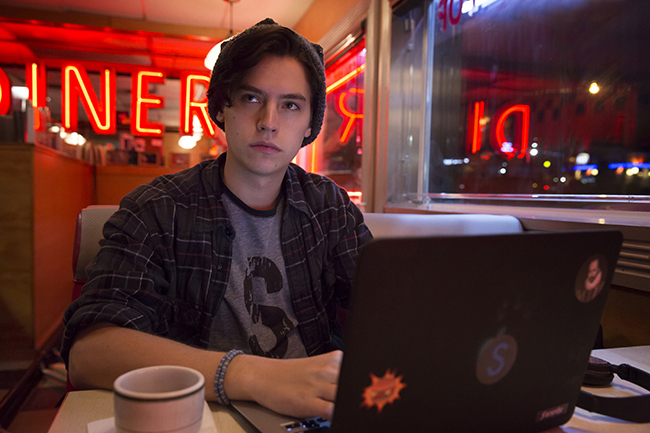 Q: Wait, Sarah Habel is a hottie! Miss Grundy is supposed to be an old bat!

A: Not in Riverdale! And she’s something of a twentysomething cougar, having seduced Archie into an illicit affair at the beginning of the show.

A: We still don’t see it in the comics. As to Riverdale, we shouldn’t be surprised. There was sex when we were in high school, too, and always has been. We just didn’t talk about it, and girls who got pregnant “went to visit their aunt” for six months. Welcome to the 21st century, where what goes on behind closed doors is discussed at Pop’s Choklit Shoppe.

Q: Speaking of sex, it looks like Betty and Veronica are kissing on one of the Riverdale trailers. I guess in the 21st century, they just don’t need Archie.

A: Don’t worry, the central love triangle is still mostly intact on Riverdale. Betty Cooper (Lili Reinhart), who has been best friends with Archie (KJ Apa) since childhood, is wrestling with stronger feelings for him. That’s complicated by the arrival of Veronica Lodge (Camila Mendes), who snags Archie’s attention.

But Reinhart told hollywoodlife.com that the kiss on the trailer is a dodge. “They’re not romantically involved,” she said. And while there’s a lot of fan fiction out there about “Beronica,” and some fans would love to see them as a couple, Reinhart says “That’s not our show.”  The girls are the best of friends, according to The CW description, and they’re unlikely to jeopardize that by fighting over a boy. 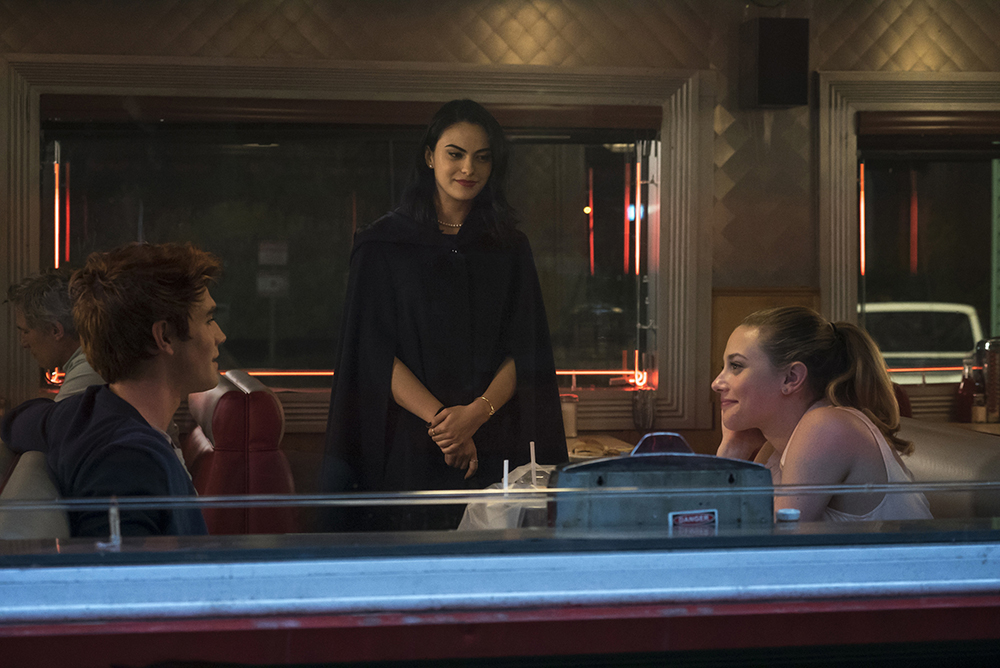 The love triangle begins in the first episode of Riverdale with (from left): KJ Apa as Archie, Camila Mendes as Veronica and Lili Reinhart as Betty.

Q: So there’s no homosexuality on the show?

A: I didn’t say that. Kevin Keller (Casey Cott) is an openly gay student at Riverdale High, as he is in the comics. And while it’s by no means definite, Entertainment Weekly describes Ethel as someone “who has a major crush on Jughead … in the comics. But, on Riverdale, Ethel will find herself in a romantic relationship with someone very different.” It’s a good bet that someone is of a different gender.

Q: Or a different race?

A: That’s possible, too. The original Archie cast was created in the 1940s, so by default they were all white. Riverdale, however, reflects the America of today.

Veronica and her mother Hermione (Marisol Nichols) are Latina. It’s unclear who plays resident genius Dilton Doiley  -- both Daniel Yang and Major Curda have been mentioned – but he’s definitely Asian. Josie & the Pussycats, which used to have one black member, is now entirely African-American (starring Ashleigh Murray as Josie, Hayley Law as Valerie and Asha Bromfield as Melody). Ross Butler, who plays Archie foil Reggie Mantle, is part Indonesian. 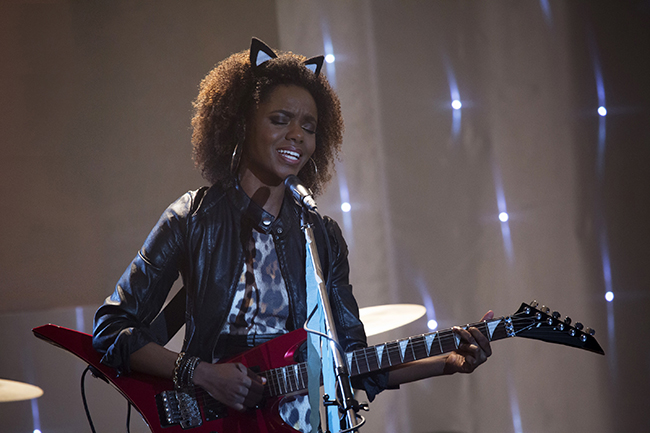 Ashleigh Murray as Josie McCoy, lead singer of Josie and the Pussycats, whose mother Sienna (Robin Givens) is the mayor or Riverdale.

Q: Reggie, Dilton, Josie and the Pussycats – who else made the cut?

A. Yep. Rumor has it that Sabrina the Teenage Witch is due to appear in the last episode of what will hopefully be just the first season of Riverdale. Anybody know what Melissa Joan Hart is doing these days?

So when does Patience Philips show up?

I believe the comics called them identical twins and they're going by that. (Seems about the only thing in the comics they're going by.) First Aunt May and now Miss Grundy. Thank goodness Adrian Toomes will be played by a guy in his 60s.

Would have been interesting to have Alice Cooper played by Alice Cooper. Wonder if there will be any jokes about her name?

You're right, and I've fixed it.

I complained about that in my reviews last week. Archie has published a Road to Riverdale collection, which collects the first issues of the new Archie comics. But the cover and title are clearly about the TV show, which has little in common with the comics, and I felt was bait and switch.

But there's a long history of comics promoting movies and TV shows based on their characters, even when there's no overlap besides the name. (See: Catwoman) I don't think marketers care very much about the niceties of editorial content.

I'm thinking it's like Gotham vs the Batman comics. Don't expect it to match very much.

Truthfully I think they wanted the names and the fan recognition those names bring and nothing else. Reminds me a bit of the last Fantastic Four film.

"I'm thinking it's like Gotham vs the Batman comics."

Yeah, I agree in terms of similarity, but I was speaking of cross-promotion. Gotham and the Batman comics don't cross-promote. DC comics may carry ads for Gotham (as they would for any network show), but if you look at the latest Archie comics, there's a multiple-page section which matches half-page drawings from the comics with half-page stills from the Riverdale.