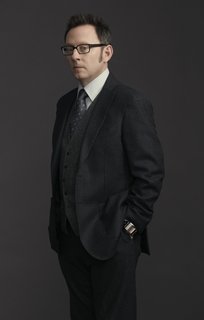 BURBANK, Calif. (July 22, 2017) — Hot on the heels of the explosive season five finale, cast and producers of The CW/Warner Bros. Television’s hit DC series Arrow dropped a casting bombshell at the show’s 2017 Comic-Con panel session on Saturday, July 22. In addition to the return of fan-favorite guest star David Nykl (who plays Oliver Queen’s friend/mentor/nemesis, Anatoly Knyazev), the series can look forward to the addition of a landmark actor from the genre series world: Lost star Michael Emerson. Talk about a person of interest!

Michael Emerson will join the series in the recurring role of an unnamed mystery character that has yet to be announced. The Emmy®-winning actor is known worldwide for playing both the enigmatic Benjamin Linus from Lost and the high-tech billionaire Harold Finch in Warner Bros. Television’s Person of Interest.

Arrow returns for its sixth season on October 12 in its new Thursdays 9/8c time period on The CW. Based on the DC characters, the series is executive produced by Greg Berlanti, Marc Guggenheim, Andrew Kreisberg, Wendy Mericle and Sarah Schechter. Arrow is produced by Bonanza Productions Inc. in association with Berlanti Productions and Warner Bros. Television.

Yeah, that's where I first came to enjoy his acting. His name is Kirk Acevedo.

He was a regular on Fringe for a while - first as a good guy, then as an evil doppelganger.

Are we still supposed to believe Black Siren can be redeemed? She did some pretty unforgivable things in this episode. Again.

Ricardo Diaz is going to finally become Richard Dragon, I think. Wasn't he a good guy originally? (Not to mention a red-head.) Has he gone bad in the comics, too?

I have to mention this, because it's really getting out of hand: Diaz ostentatiously cocked his gun as an exclamation point to what he was saying twice in one scene. Hollywood writers, please listen up: If you cock your gun, you have to fire it before you can cock it again. If there's already a bullet chambered, you can't chamber another one until the first one is gone. I don't care how dramatic it sounds.

Oh, I know, I've lost this fight. Just like I've lost the fight that space ships bank and make sounds in space, and that blades of all kinds go SHING! every time you move them.

Cap, in current DC continuity, Ricardo Diaz is the second Richard Dragon.  The original Dragon was apparently his mentor until Diaz betrayed and murdered him before stealing his identity.

He was introduced shortly after the "New 52" reboot, and I believe has appeared exclusively in Green Arrow's solo book.

Thanks for the recap, KS. I vaguely remember the ginger Dragon from his own title back in, what, the '70s? But I gave up quickly on the New 52 Green Arrow, and probably only knew about an evil Dragon from dialogue in other books or seeing covers here and there.

OK, this latest episode has given me an idea, and a shape, for the endgame. Pretty cool how they've set it up.