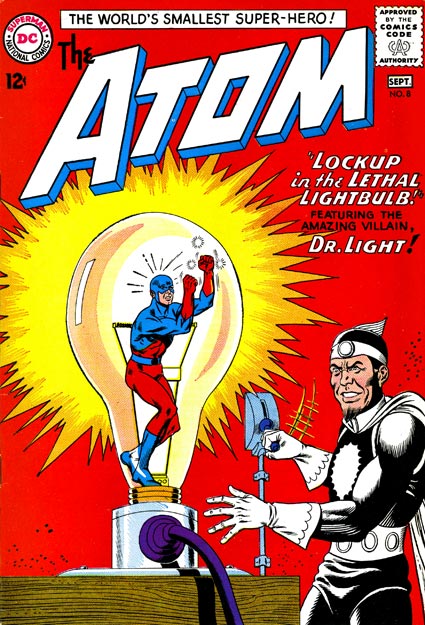 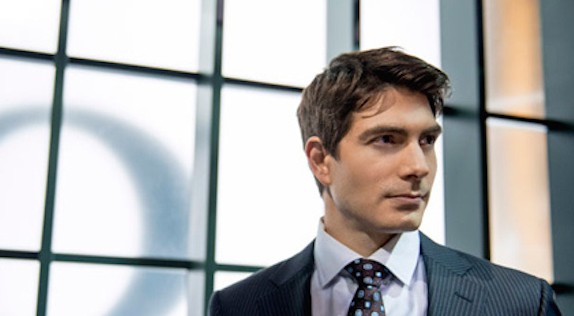 I won't bring up the Atom's miniscule rogues' gallery but his arch foe Chronos the Time-Thief must have been fairly popular or the only Atom-enemy that anyone could remember.......

I think his costume was so over-the-top that, along with the Joker, he is visually pretty hard to forget. Jason Woodrue, the Plant Master, was visually just a guy in a lab coat* until he became the Floronic Man. As the Floronic Man he was a little more memorable but in some ways looked silly. Of course, so did Chronos.

* The lab coat (or prison outfit) for Lex Luthor was probably replaced for a time by his purple and green costumes in an attempt to make him more visually striking.

It's after the Silver Age but Sword of the Atom: Yea or Nay? They killed off wives and girlfriends but never showed infidelity. They've altered heroes before but never put them in a killing situation.

I never read Sword of the Atom, but it amazes me when comics companies create characters wielding swords when they have no intention of having anybody killed (or even cut).

Regarding Sword of the Atom, I read the middle two issues (in a local B&W comic). My thinking about them is like Mr SA's. But instead of dropping the little people as it did, perhaps DC would have done better to keep them around and have Ray take up a university position in Brazil. They could have assisted him in his adventures.

By coincidence or rare happenstance, I found myself just the other day reading "Buzzin', Buzzin', Who's Got the Buzzin'?" from ATOM & HAWKMAN # 43. In that story, it's explicitly pointed out that Ray Palmer is "a very young assistant professor," with an eye toward promotion (associate professor would be the next logical step, and then full tenured professor).

Curiously, even though the numbering of ATOM was continued when ATOM and HAWKMAN were smushed into a single title, and even though Schwartz had given up the editing of HAWKMAN for a while but continued on with ATOM, the front covers of both A&H # 43 and 44 featured only Hawkman (and the Gentleman Ghost), with nary a hint of the Tiny Titan anywhere. Issue # 45 was the final issue, and easily the wackiest of the bunch, as Jean Loring is driven insane and the story ends with her still lacking quite a few of her marbles.

Although the story continues directly a few months later in Justice League of America #81.

Which should have been the end of Jean's madness but it was revisited in Super Team Family #11-14.

I never understood how the Atom could talk (or breathe) aT sub-atomic size, until eventually it was explained that oxygen atoms would shrink down with him. But that just raised the question of how long that air would last, and Ray never worried about that. I just try to forget it.

The Silver Age is full of nonsensical science. Apparently the editors (especially Stan) knew a little about science, probably from reading something in the newspaper, and threw in technical terms that sounded good (because they were real) to explain the magic they were really using. Science was a wonder then.

Even so, I'd think Julie would know better than to be throwing around (literally) white-dwarf stars. I always knew that made no sense, but since it really was of absolutely no consequence what the material really was, I never much thought about it.

Abra Kadabra had it best. Any advanced-enough science looks like magic to us, which is what most SA science looked like. He didn't have to explain HOW he could turn Flash into a puppet or fling him into space without his costume, it was just science too advanced for us to understand!

The Atom won two Mopees, one for having his molecules ironed flat and one for being stuck in Europe, so he flew a toy flying saucer up into the atmosphere, let the Earth turn beneath him, and then came straight back down now in America. A white dwarf-star costume is nothing in that world.

When I started composing this, I decided not to mention the immense weight of what a real fragment of white dwarf matter would have. Better that it was a tiny pebble or a grain of sand than the chunk Ray was able to lug around.

I also granted that the Atom had some sort of "atomic" senses that allowed to perceive things in a miniature size as he could normal size. Because a lot depended on his vantage point. Being one inch tall on the floor is not a great spot for spying. Or that his tiny ears could make out what giant voices are saying.

That being said, I was going to bring up the necessity of the Atom possessing some sort of "atomic" speed. The smaller he gets, the scale of distance changes for him. Running across a room at, say one-inch tall, takes time. I know that he can leap and glide using his weight control but even that doesn't take into account the ratio of distance. Gliding across Ivy Town at a few inches high could take hours if not days.

I never understood how the Atom could talk (or breathe) aT sub-atomic size, until eventually it was explained that oxygen atoms would shrink down with him. But that just raised the question of how long that air would last, and Ray never worried about that.

He didn't need to breathe. He was really the Earth One Spectre, in serious denial.

He was really the Earth One Spectre, in serious denial.

I don't know if I read this somewhere, ages ago, or if I came up with the idea by my lonesome, but I always thought that Deadman was the Earth One Spectre, in the same way that Ray Palmer was the Earth One Atom (i.e., just barely similar to the Earth Two original, but close enough that they share the same cosmic DNA).

The difference between Deadman and the Spectre are like Hawkman and Superman. Yes they're both aliens and can fly but c'mon!

Something I read the other day reminded me that there was an Earth One Jim Corrigan in the 70s. He was a black policeman who appeared in Jimmy Olsen.

The Baron replied to Jeff of Earth-J's discussion Swamp Thing
"And thus, the world was made safe from comics adaptations of My Friend Flicka."
34 minutes ago

Jeff of Earth-J replied to Jeff of Earth-J's discussion Swamp Thing
""When the CCA was established, one of the results was apparently to avoid the use of the word…"
1 hour ago

Dave Palmer replied to Captain Comics's discussion This Week in Comics: June 20-26, 2022
"For an 80s example see Silver Star, and for a 90s example see Bombast."
1 hour ago

Steve W replied to Steve W's discussion A Cover a Day
"Hi all. George Perez not really my subject. Have had a short break from the thread but missed it…"
1 hour ago

Richard Willis replied to Steve W's discussion A Cover a Day
"Peter Wrexham said: I notice that Steve W hasn't posted anything since this cover on June…"
1 hour ago

Rob Staeger (Grodd Mod) replied to Jeff of Earth-J's discussion Dark Shadows
"I guess I was really busy the week before I went on vacation, because I watched several episodes…"
2 hours ago

The Baron replied to Jeff of Earth-J's discussion All in Color for a Dime
"I've seen the Flash Gordon serial, never seen the Buck Rogers one."
3 hours ago

Philip Portelli replied to Jeff of Earth-J's discussion All in Color for a Dime
"I was watching the "Buck Rogers" serial on TCM and, God help me, I couldn't stop…"
3 hours ago

Jeff of Earth-J replied to Randy Jackson's discussion Misheard lyrics you prefer to the original
"Regarding pareidolia, I've got a story for you... When I was in college, an evangelical…"
3 hours ago