Avengers 2 trailer: How awesome is this??

Yeah, I know you've seen it! What do you think?

Me, I love the way they're mixing Disney/Marvel. Am I the only one getting the Pinnochio reference? A great angle, for sure!

My only complaint, the Scarlet Witch seems too --- uhm, non-Gypsy to me. I always pictured her with a very strongly ethnic look. This lady just seems like she was pulled out of a Barbie Doll box. Oh well, very, very minor!

Wanda's classic look is kinda 'Stage Magician's beautiful assistant', which although I loved everything about Wanda, isn't really what a modern audience might react to.

Perez' Romany gypsy look was interesting and a good way of bringing out her character and history rather than making her just a generic superheroine, but in a movie, perhaps there's a bit of a minefield there in terms of representation of a much put-upon group?

I see they've gone with '21st Century disaffected youth' for this version of Wanda.  Ah well, I've had my day.  And it was good! 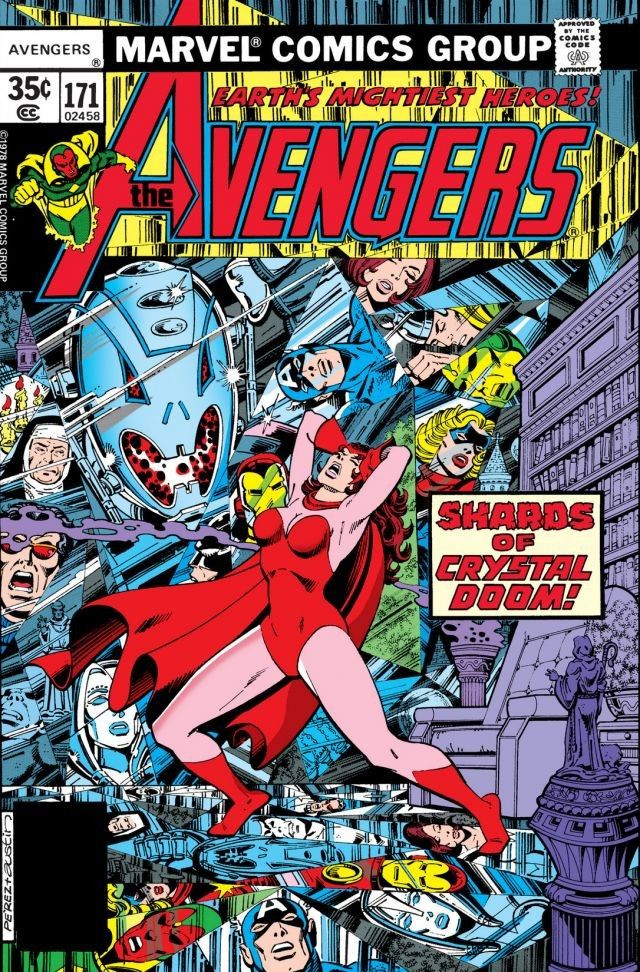 Seriously, I know the film is named after a Bendis event which is probably a snoozefest, but seeing Wanda in the trailer made me think we might be getting something closer to that up there.  Certainly the tone seems to be more of the 4-colour operatic superheroics that Perez and Byrne did so well in the late 70s than modern Bendis comics tend to be.

I wonder if they toned down Wanda's sexiness because Scarlett Johanson is the bigger name.

They seem to have "humanized" Ultron's look.

I doubt it. I just saw the X-Men Days of Future Past version of this character for the first time last weekend. It's going to be pretty hard to beat. This version seemed the most "Marvel-owned movie" version of a character that wasn't actually owned by Marvel--it felt like he was having a good time doing his job, in other words.

There's a LOT to keep us talking and guessing from this trailer!

Yes, I got the Pinocchio reference ... did you notice the song in the background (that Ultron finishes) is "I've Got No Strings" from Pinocchio the Disney movie?

I liked also that, since Ultron is now a Stark mis-invention instead of a Pym mis-invention, they've made the connection stronger by drawing a line between Ultron's "face" and Iron Man's. His original body is apparently going to be a beat-up version of remote armor. COOL! That actually makes more sense than the original!

We don't see why Thor dropped his hammer. Was he suddenly unworthy? (There's a scene online of the various Avengers trying to lift the hammer, so that looks suspiciously like a gun on the mantelpiece.) It could be Ultron's encephalo-ray, because we don't see much of the Thunderer elsewhere.

Scarlet Witch is played by one of the Olsen twins. I never thought they were all that attractive, and continue to think so. I mean, sure, they're vaguely pretty. But not enough to justify the huge amounts of drooling media attention I've seen over the years. Anyway, I'm sure they avoided the whole gypsy thing like the plague -- no matter how they handled it, there would have been complaints. For one thing, it's "Romany" now, not "Gypsy," which is short for Egyptian, which they never were (they're of Indian descent), and is the origin of the verb "to gyp," or steal from, and all of it is regarded as an ethnic slur. Better just to vanilla-ize her, eh? Anyway, I like the visual effect of her power -- and I'm eager to see how Joss Whedon defines it and uses it.

Also, Pietro (if he's called that) and Wanda aren't mutants in the Marvel-verse, they're experiments by ... Red Skull? Arnim Zola? Something like that. So their powers could be different, too.

Also, given Stark's arrogant speech in the trailer, and given that Ultron (who threatens the world) is his invention, is there any doubt that he won't be an Avenger at the end of this? Especially since the next Cap movie is titled Captain America 3: Civil War.

There was a brief shot of NIck Fury. Glad to see he's still around.

I love any scene with Black Widow in it. The motorcycle bit was pretty cool.

Coincidentally(?) the male lead in the Godzilla movie, Aaron Taylor-Johnson, is playing Pietro! They probably won't kiss in this one, though.

The credits scene in The Winter Soldier shows Baron Strucker (!) with the two siblings. He was talking to somebody, probably Zola.

The "special sneak preview" scene (rolled out by Marvel after the trailer leaked) was also fun.  The Lad and I especially liked the expression on Thor's face when Cap almost managed to move the hammer.  I had to explain "I've Got No Strings" to the Lad, though.  Old Disney movies are outside of his frame of reference.

Has it been confirmed that this version of Ultron is a Stark experiment?  I agree that creating a rogue AI does seem like just the sort of mistake Ol' Arrogant Tony would make.

I remember her in Godzilla, but wasn't impressed. She doesn't seem able to move her face! My wife says she looks like she's "had a lot of work done," or maybe it's just Botox. But the constant blank expression doesn't say "great acting" to me. It says "Blake Lively School of Inert Acting." But that's what makes horse races.