I'm using the Official Index To books from Marvel.

Should've gone with my gut.

I've seen the cover credited to Buckler in a checklist, and I think the GCD used to credit it to him, but it currently credits it to Kirby

Was Amphibian ruler of Atlantis on that world? He might have gone home before the Avengers met the Squadron. Being Hawkman, perhaps the American Eagle/Cap'n Hawk died and was reincarnated differently during that time.

Besides Brain-Child, they might have had a shock similar to Captain America finding out about 616's Nixon.

I'd read only one issue of Justice League by that time and wondered why they broke up the heroes that way. Seemed like an interesting new way using a team, but probably wouldn't have thought that if I'd known it was used so many times in the JLA. 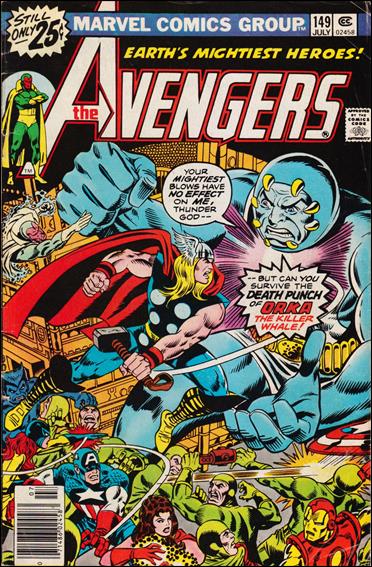 “The Gods and the Gang!"
Nice to see Thor back commanding a cover isn't it?
Again, who's surprised to find this was NOT drawn by Kirby?

Actually, the Avengers here look like they may have been superimposed on the cover from other sources -- the Scarlet Witch looks like a Perez figure but the Vision looks like a Starlin or even a Cockrum figure don't you think?

Nice to see Hellcat in a cover appearance but yet again no Moondragon.

The splash page highlights the title as we get a split-screen with Thor and Moondragon (the Gods) arriving at Avengers mansion and the rest of the Avengers (the Gang) crossing dimensions.

and actually, it's kind of difficult to disagtree - isn't it?

Roxxon head Hugh Jones gets a telepathic link on with Mr Rockefeller of the Squadron Supreme's Earth (because they both once wore the Serpent Crown - remember?) and learns that the Squadron have denounced their illegal government activities, leaving Rockafeller too busy to help out.

The Avengers are surprised and defeated by...while Thor and Moondragon arrive to battle.."--.Orka The human Killer Whale!" (who we all remember form Sub-Mariner #23-24, 66-67 -? ...nope, can't say I do! Can't say I'm a fan either, huge big blue guy with silly teeth around his face - I much prefer the Tiger Shark concept!)

- "You are so insufferable Thor! A Hammer is no fairer than a brain blast!"

- although she falls herself.
I am not sure what was the purpose of all the constant bickering between Thor and Moondragon.

Clearly she was trying to elevate her own importance and had a snobbish attitude to Thor's position among mere mortal Avengers but to repeat this viewpoint again and again and again became soooo tiresome didn't it?

The rest of the Avengers are helpless and having their powers drained (I think) by Roxxon badguys including Hellcat's ex-husband.

Perez is doing well already by getting the body shapes of our heroes slightly different but all his Roxxon employees look alike!

While Buzz Baxter reminisces before his dying ex-wife Patsy - now heroine Hellcat, she escapes and battles him.
"You dumb broad!"
"So you've got a broken heart and a super-suit! So what?"
"So free my friends, lover-boy -- or I'll scratch your eyes out!"

Meanwhile, Thor defeats Orka - and we learn that Moondragon was only playing possum,
"You had to see-- had to let yourself see-- that you alone are the equal of all your fellow Avengers!"

And that's it - there you have it! Buzz Baxter faces the freed complete set of Avengers and Thor has won the day against the guest bad-guy/monster.

I'm still quite confused about what this victory actually achieved?

What was at stake?

What was the role of the Serpent Crown at this point?

It makes for a fine ending to the Serpent Crown Affair - but ......I still couldn't tell you what the plot/motivation was!

The epilogue is a kind of watershed moment - to me the Avengers as a team and as a title really get going and enter a golden age ...from the next issue onwards!

Thor realises and announces that he's been pulling his punches in the team for too long and is starting to accept his true value and the rest of the  group remind themselves all this began with a  membership drive (back in #136!)
"Lets go back to the mansion, people. It's time to make our choice."

If you thought you liked - if you noticed I really liked - the Avengers series before -- it all explodes from here on in..!

What was the point of throwing in Orka? Englehart decided at the last minute he wanted Thor in the battle (then why not bring him in sooner?) and realized there was nobody left for him to fight but Buzz? Seeing Thor and Hyperion go at it would have made a much better story than somebody tossed into the story at the last second.

Time to make their choice? If anyone didn't want to stay you'd think they would have been discussing that when they were in that cage. And anybody going back to the mansion to hear the decision probably wasn't planning to quit. Never saw anybody (except Spider-Man in the 80s) try to join and be told to get lost. Patsy remaining Hellcat but not staying wouldn't make a bit of sense, would it? So, what happened? Englehart decided to take her with him when he left? Why make her a superhero for just a couple of issues?

Today of course Iron Man would just put on his Hulkbuster armor and beat Thor up to prove Moondragon was wrong. Was it decided to put Iron Man at the Thor/Hulk power level in the comics, or was that just so Robert Downey could be the most powerful Avenger in the movies?

Just realized I didn’t post anything about #148 yet (the index I use lists Rich Buckler as the artist, too), but I did read both #148 and #149 over the weekend. Regarding Moondragon and her “godhood”… I can see why none of the other Avengers like her. (That sounds like such a “high school” thing to say.) At least she’s consistent. Other than that, I don’t have much to say. Neither does Englehart.

“Moondragon propounds her ‘You and me, thor. We’re the gods here,” idea. He’s too human to believe that… yet too god to dismiss it from his mind.

“Jan tells Hank she’s not going to wait for him this time.

“#149: And… that’s a wrap. All the plotlines that began with ‘We do seek out new Avengers” have come to a conclusion. So that, for issue #150, we can introduce the fully vetted, permanent new team.”

I think that Moondragon was mentally influencing both Thor and Iron Man and failed to have them "worship" her or proclaim her superiority, which she needed/demanded them to acknowledge since "losing" the Celestial Madonna title to Mantis was a devastating blow to her (super)ego!

With her powers, she must have known that the others preferred the Beast to her and would rather she left. Perhaps she felt how much the others liked Hellcat so to punish the Avengers, she talked Thor into leaving, refused to join herself and take Hellcat with her!

Didn't they establish somewhere that the American Eagle we first met was actually the father of Cap'n Hawk?  The original (no doubt also a member of the Golden Agency) had retired, and his son took over the family business, first using his dad's old identity, and then moving thru several others as he attempted to make the role his own somehow.

On the other hand, a number of the Supremes changed greatly from one appearance to the next until Gruenwald finally set them in their "classic" forms, so maybe between those early appearances, the Squadron's Earth was beset by various reality-altering crises that altered them and their various personalities, backstories, and who was or wasn't a charter member of the team.  It's not like that sort of thing never happens, it just seems to have happened to the Squadron Supreme before it started happening to the JLA...

According to the Official Handbook of the Marvel Universe, the American Eagle we see in Avengers #85 is James Dore, Jr. who becomes Cap'n Hawk in #145, then the Blue Eagle in Squadron Supreme #2.

His father, James Dore, Sr. (Ha!) was the first American Eagle of the Golden Agency along with Power Princess and Professor Iman (I would have loved to see the entire WWII roster!). The son followed in his father's footsteps with the same outfit and fervor but something happened to cause Junior to rebel against his father's wishes for him (Vietnam? Civil Rights? Nixon?) and establish a new identity for himself as the master of ancient weapons, Cap'n Hawk!

Basically.  I've long wondered if, since their modern day speedster was the Whizzer, did the Golden Agency had a speedster named Quicksilver?

Did they also start out thinking they were father and son then find out otherwise?

Their Spectre would probably have been the Living Tribunal.

I'm wondering if their Johnny Thunder was actually competent. Being less tolerant than the characters they were based on, if he was a nitwit like the original they probably tossed him out. Or used one of those #85 death traps on him.