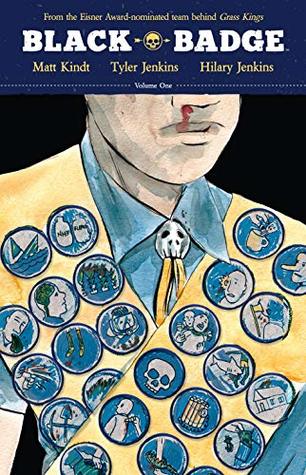 The Grass Kings team of Kindt and Jenkins reunite for this thriller, which basically is a Young Adult version of Kindt's Dark Horse series Mind MGMT (the story refers obliquely to both of those series, but does not require prior knowledge to understand this story).  The titular Black Badge is a team of Boy Scouts tasked with covert operations: they go into dangerous situations that adults could not, protected by the appearance of childish innocence.

So they cross over from South Korea to North Korea to mark a scientist for capture, confident that they will be seen as lost kids when caught. A second mission takes them to Siberia to break an inmate out of prison. When sent to Afghanistan to smuggle a spy across the border to Pakistan they take the opportunity to investigate the disappearance of a former team member, which gives them reason to question their role.

It's all pretty lightweight compared to Kindt's usual work: one mission per issue, with limited space for complications (or character development). Jenkins provides distinctive character designs. His backgrounds tend to be minimal, but there's always enough detail to tell the story effectively. The collection includes Kindt's usual background creations, including a set of merit badges with names like "Household Explosives" and "Alternate Weaponry." There is also a large collection of alternate covers, plus Kindt's development art and a "New Recruit Aptitude and Personality Questionnaire."