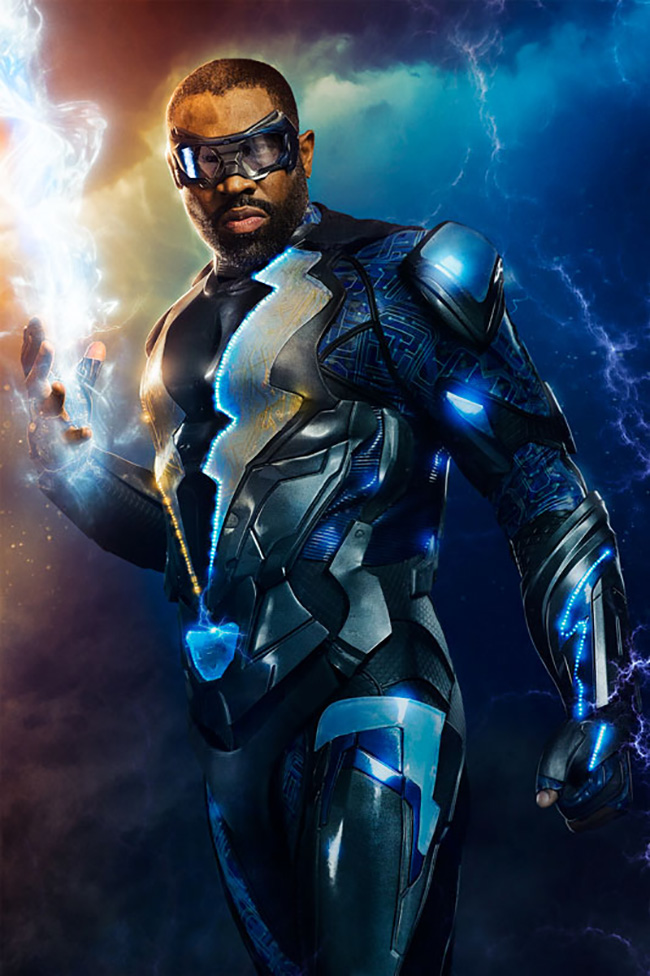 Cress Williams plays Jefferson Pierce, a father and schoolteacher who reluctantly emerges from superhero retirement in the The CW’s Black Lightning.

Black Lightning, a new superhero show, debuts on The CW Jan. 16. He’s new to TV, but the African-American hero with electrical powers has a long, proud history in comics.

But before we talk about who he is, let’s establish who he’s not.

Black Lightning is not Black Vulcan, the African-American hero with electrical powers on Challenge of the Super Friends, although there is a tale to be told there. According to a 2007 story on wizarduniverse.com, Challenge producer Hanna-Barbera wanted to use Black Lightning, but were told a fee would have to be paid to Black Lightning creator Tony Isabella. So they created another character that was just a transparent rip-off.

Black Lightning is not Static, of the Static Shock cartoon, nor is he related in any way. Static debuted in 1993 at an independent DC Comics line called Milestone, and later got his own animated show. But there’s been no public acknowledgement of any connection between the two characters, and personality-wise, Static owes a lot more to Spider-Man.

“Somewhere along the line, electrical powers and black superheroes seemed to have been got joined at the hip,” Isabella said in a Jan. 6 podcast at sliceofscifi.com, and he’s not wrong. In addition to Black Vulcan and Static, Storm of the X-Men wields lightning, and Volt of Image’s Irredeemable is so aware of his resemblance to other black characters and their electrical powers that he jokes about it. But Black Lightning was definitely the first major one, and DC’s first black headliner. He was created in 1977, when Tony Isabella – who had written Luke Cage and Black Goliath at Marvel Comics – was brought in by DC to write an African-American character. They had two issues of a character called “The Black Bomber” written, and wanted Isabella to punch up the scripts.

Isabella, as he has established in many interviews since, refused. He was appalled.

The Black Bomber was actually a white racist, who – due to the time-honored comic book origin of “scientific experiment gone awry” – could become a black superhero. That’s weird enough, but weirder still, both the white guy and the black guy had separate personalities and were initially unaware of each other. And shockingly, the white aspect is horrified when he discovers he risked his life to save a black baby, whom he refers to as – no lie – a “jungle bunny.” To complete this picture of clueless, casual racism, the Bomber’s superhero outfit was essentially a basketball uniform.

“I told [DC], you cannot publish these scripts,” Isabella said in the podcast. “And they go ‘why?’ ‘Because they’re offensive. People will come to your offices with pitchforks and torches.’ And they go ‘How can you know that?’ ‘I’ll be leading them.’”

Isabella eventually won the argument, and created his own character, Black Lightning. The first issue introduced schoolteacher Jefferson Pierce, who had inborn electrical abilities that he had always kept hidden. Pierce becomes principal of his alma mater Garfield High in Metropolis’ Suicide Slum neighborhood, and in reaction to the urban ills affecting his students, reluctantly dons a mask, uniform and Afro to fight the organized crime group called The 100 and corrupt politicians led by Tobias Whale.

That first series only lasted 11 issues, due to an industry downturn. A second series in the 1990s, also written by Isabella, only lasted 13 issues due to creative differences. A third series, Black Lightning: Year One fleshed out Isabella’s origin for the character, although this six-issue miniseries was written by Jen Van Meter.

But Jefferson Pierce had quite a career outside those eponymous titles.

Amazingly, Black Lightning was offered membership in the Justice League in 1979, but turned it down. (He even called them “jive turkeys” on the cover.) He did join the team much later (when just about everyone in the DC Universe did), but his primary team association is as a founding member of Batman’s “Outsiders.” He also had a notable team-up with Blue Devil, an obscure DC character who is, in fact, a big, blue devil.

Strangely, Pierce appeared during the Lex Luthor presidential administration as Secretary of Education. Not much was done with his presence in that storyline, and it’s best to think of it now as apocryphal – because Pierce, as Isabella created him, is far too honorable to have any association with Luthor.

Pierce also aged (gracefully) in his comics incarnation, with two daughters being added to his story – both of whom have inherited super-powers. Youngest daughter Jennifer is most like Daddy, employing almost identical powers, as the superhero Lightning. Eldest daughter Anissa can become almost indestructible and create shock waves, and goes by Thunder.

Not so in his newest series, once again written by Tony Isabella. Black Lightning: Cold Dead Hands is a six-issue miniseries featuring a 28-year-old Jefferson Pierce. He doesn’t have any daughters (yet), but his new home town is Cleveland (like Isabella) and, Isabella told sliceofscifi.com, “We’re trying to do a superhero story in a real-world setting.” 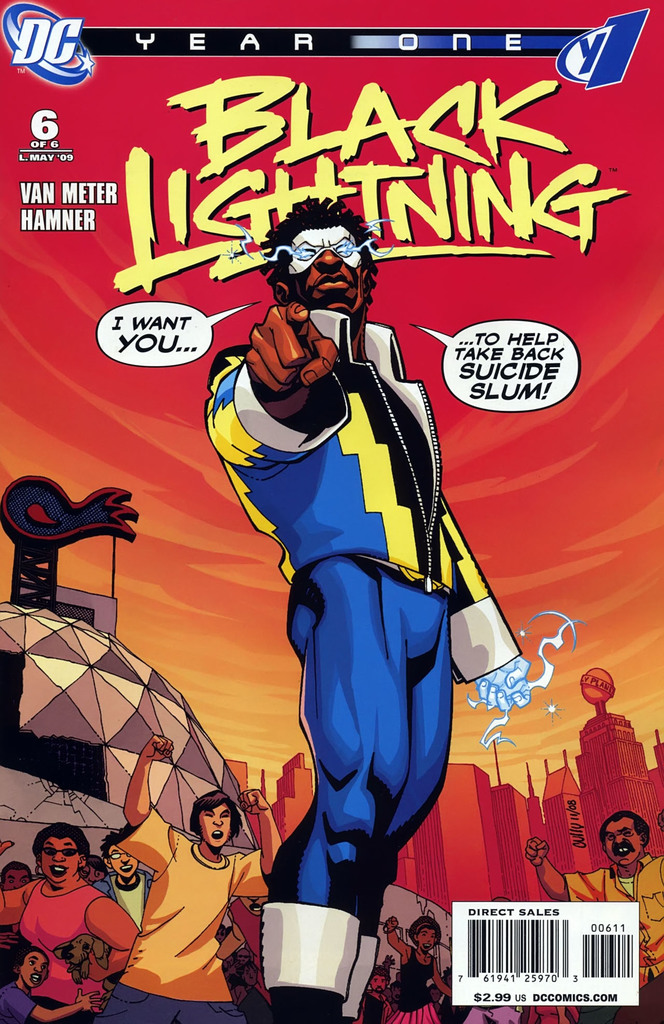 Black Lightning has only had three eponymous series at DC Comics, including the six-issue Year One, but has had a big impact in other titles, such as Batman and the Outsiders.

Much of that will be present in the CW show, for which Isabella wrote a description of Black Lightning’s core values. Jefferson Pierce (Cress Williams) will once again be a reluctant superhero, but will be much older than his current comic book counterpart. Once again he will have two daughters, Anissa (Nafessa Williams) and Jennifer (China Anne McClain).

Despite Black Lightning appearing on The CW, it won’t be set in the same “Arrowverse” as Arrow, The Flash, Legends of Tomorrow and Supergirl – at least for the first year. Jefferson Pierce’s story wills stand alone, as it often did in the comics that inspired the show.

What the producers and actors said at Comic-Con International: San Diego probably gives the best heads up about the series:

“Usually we see heroes who are trying to save the world,” Cress Williams said in San Diego, as quoted by comicbookresources.com on July 7. “But he’s saving the world one person at a time.”

“Why Black Lightning?” said executive producer Salim Akil. “Because I think it’s time. I think Jefferson Pierce is the epitome of what black men are. He loves his wife. He loves his children. He loves his community. … This is going to come from an authentic black male voice.”

After giving him dreadlocks, he kind of does look like Static on that cover.

I didn't read Year One, but I'd guess that the 'locks were the modern equivalent of BL's original Afro, a wig used to distance the jive-talkin' supehero from the straight-laced schoolteacher. Still, it was the almost full-face mask that I think would be the most effective tool -- which is gone in the minimalist current version. Let's hope Jefferson Pierce wears glasses, or everyone will guess his secret ID!

One of the artists on one of the versions of the Black Lightning title came up with lightning around his eyes. The idea was that people would be dazzled by the lightning and wouldn't notice his facial features.

One of the artists on one of the versions of the Black Lightning title came up with lightning around his eyes. The idea was that people would be dazzled by the lightning and wouldn't notice his facial features.

We watched all of season one but mutually agreed to drop season two.

We liked the characters (the family element), but the stories no so much.

My wife and I declared the guy playing Gambi as "Worst Actor On This Show." He seems to only have one mode. But we're going to watch.

I like the family scenes too, but I find the show as a whole kind of a slog.

It annoys me when they refer to Tobias Whale as an albino. He has way too much pigment to be an albino, something they could have fixed with makeup and contact lenses.

I am recording the episodes but I have to wait until I'm in the mood to watch them.

I really like the show -- it's the most pointedly written of the CW shows. More than any of the others, it feels like it has a perspective on life, and on justice, that isn't just whatever's convenient for the current plot. And I especially appreciate that there are more grownups on this CW show -- people with jobs, and real-world concerns.

It's not as fizzy as those other shows, but it feels more human, which pays off. When the humor's there -- like when Jennifer told her parents at dinner that she was ready to have sex -- it's smarter and funnier and more realistic than what the other CW shows are capable of.

Richard, Marvin Jones III, the actor who plays Tobias, is, like the character, an African American with albinism.

Richard, Marvin Jones III, the actor who plays Tobias, is, like the character, an African American with albinism.

What threw me the most were his dark eyes. Reading about albinism, I now understand that older people with albinism may have eyes that have darkened over time, but that even they do not have the same amount of pigment in the irises that a non-albino has. Their eyes appear to be the same as a non-albino to the casual observer.

Ah, yeah. I didn't realize he was albino at first, myself; I've only known a few people with albinism, and none of them well. But it seems to manifest in different degrees in different people -- and as you say, even differently in the same people over time.