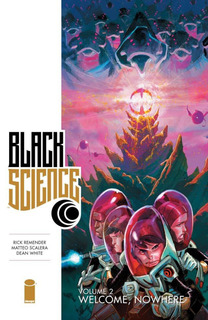 We left our intrepid explorers on the run at the end of the first volume, and they're on the run through most of this one as well. They do stay on the same planet until the last panels, but there are two recurring alternate scenes. One is a flashback, the other takes place on one of the alternate realities.

There are a number of character surprises in this collection. Kadir may be not such a bad guy; Nathan and Pia McKay are learning to be independent; and Grant McKay--the main scientist driving the project--may not be dead after all, at least in some realities.

Scalera really goes to town on the alien character designs. Early in the arc one of the characters asks "Is that horse a...fish?!" And that's not the craziest thing. There are also telepathic millipedes, talking dinosaurs, flying hippos, and a truly bizarre bear/lizard/snail hybrid.

I think this is the first arc where the phrase "black science" is actually used. The Pillar technology that drives the series has supporters and detractors. In the long run it may be that conflict that will drive the story.