So are we going to talk about the finale to Blackest Night, or what? Lighting the White Lantern of Spoiler Alerts here... 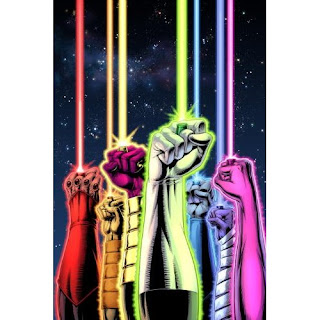 Permalink Reply by Horn'd One on April 3, 2010 at 7:29pm
I've decided to re-post my 'score-sheet' of the various Lantern Corps here. Let me know if I missed anything & I'll update my files.

Red Lantern Corps (Rage/Hate)
Power Source: Central Battery on Ysmalt, Sector 2814
Entity/Avatar: Unnamed
Noted Agent(s): Atrocitus, Dex-Starr, Ratchet, Skallox, Bleez, Zilius Zox, Fury-6, Vice, Haggor, Veom.
NOTE: Upon induction, the agent's blood is replaced by a napalm-like plasma, which can be spat as a weapon. As long as anger is present, the red fire burns. The blue light extinguishes the red flame. If the ring is removed, the agent dies.

Orange Lantern (Avarice/Greed)
Power Source: Battery possessed by Larfleeze on Okaara, Sector 2828
Entity/Avatar: Unnamed
Primary Agent: Larfleeze aka "Agent Orange" is the only living Orange Lantern. Others that appear are energy-constructs of those he’s slain & stolen the identity of. The orange ring cannot draw power from a blue ring. The orange ring also has an addictive side-effect that manifest as an insatiable hunger.

Indigo Tribe (Compassion)
Power Source: Unrevealed, members use a walking-staff with a large open-mouth & crystal at the top (which acts as the ‘lantern’) along with a ring.
Entity/Avatar: Unnamed
Noted Agent(s): Indigo-1, others; members have Tribe symbol tattooed visibly on their bodies.
NOTE: Members take no active role in the War of Light, except to tend to the wounded or dying. Native language spoken by the Indigo Tribe is unknown, but members can speak English at any time. Indigo-1 has shown ability to manipulate/absorb(?) Green & Yellow energy. Combining Green energy with other ring-energies can destroy a Black Lantern ring.

Black Lanterns (Death)
Power Source: Anti-Monitor, trapped in Central Battery on Ryut, Sector 666; Rogue Oan 'Scar'
Entity/Avatar: Nekron (“Lord of the Unliving”, demon from Hell)
Noted Agent(s): Members are reanimated dead
NOTE: BL rings ‘wear’ the dead. Agents are apparently devoid of emotion (soul?) & can detect the 'dominant' emotion in their target. Rings download the memories of the one to be resurrected prior to reanimation. Rings provide flight & hard-energy constructs. Magic has no effect on BL rings. BL rings failed to reanimate Don Hall (Dove I). Agents retain any powers they previously had, but still suffer from decay & can be reconstituted, even from total destruction, if the ring is still active. BL ring must be destroyed for the agent to be stopped. Agents apparently cannot see/scan through thick ice.

White Lantern Corps (Life)
Power Source: all life in the DC universe
Entity/Avatar: “The Entity” (full name unrevealed)
Noted Agent(s): Thaal Sinestro (first modern host), anyone in the entire DC universe
NOTE: Thaal Sinestro, former GL, leader of the Sinestro Corps, became the first modern era person the become a host to ‘The Entity’ of Life, and thus the first White Lantern. Later it was revealed that anyone living can become a White Lantern. After the War of Light & the revival of several previously deceased heroes, a White lantern power battery landed on Earth.

Permalink Reply by Horn'd One on April 4, 2010 at 12:13am
OK, here's a few more questions for those who have been keeping up with the series;

1) Will other Corps clash over the same potential agent?

2) Are there any Black Lanterns straggling about? They'd make good recurring baddies, as do the Red Lanterns and Sinestro Corps.


I'm betting it turns out to be a cosmic "Nok, nok" joke.

Here's another question: Scar named Black Hand as the 'entity' of Death, in the same league as Ion is for Willpower & Parallax is for Fear. Now that he's alive again, will we see a different 'entity of Death'?

Permalink Reply by Dagwan on April 5, 2010 at 12:08pm
Geoff Johns has stated (somewhere) that Deadman will be a primary character in Brightest Day.

Permalink Reply by Horn'd One on April 7, 2010 at 12:27pm
Does anyone have a spare, or can get ahold of an Indigo Tribe symbol button? Now that I've scored a full set of rings (save for the White one coming out), I need to put matching symbol buttons to it, & my FLCS has all the rememing ones I need except for the Indigo one. Please contact me by PM. I already have the Green and Black ones.


I'm just going to print that out and file it in my longbox under "Blackest Night".

And you can add Jade to that list as well.

That 4 (!) page spread...Arthur/Mera and the Hawks reunited and it feels so good scenes...Firestorm and J'onn back from the dead...excuse me, I have some sentiment in my eye...

Permalink Reply by Chris Fluit on April 7, 2010 at 5:35pm
in what I hope launches an excellent story -- the resurrection of Boston Brand. (Strangely enough, this has the effect of a "death" for most characters, which I think will be fun for writers to play with.)

I agree. I'm not a Deadman fan but I thought that was a great move. It sets up new possibilities and shows some unintended consequences. I also liked that the Anti-Monitor was brought back, for very similar reasons. Blackest Night ended up, but that doesn't mean everything was tied up with a big happy bow on top.

Resurrections I'm not sold on: Ronnie Raymond -- though if he and Jason are teamed for the new Firestorm, that has potential -- and Jade,

And those are my two favorites. Along with Aquaman and Martian Manhunter.


I do wish they'd have resurrected Ralph and Sue, or at least *do something* with them as ghosts.

I think that the reason they didn't had to do with Hal's "we chose to live" speech. Ralph chose to die so that he could be with Sue.

Permalink Reply by Horn'd One on April 10, 2010 at 6:55pm
Well I did score the Indigo Tribe symbol button today, along with the White Lantern symbol button at Midtown Comics. Cost me $2 each.

ClarkKent_DC replied to Steve W's discussion A Cover a Day
"Continuing on ... Jonah Hex graduated to his own series, titled Jonah Hex of course (March-April…"
48 minutes ago

ClarkKent_DC replied to Steve W's discussion A Cover a Day
"Another case of retitling but not renumbering: All-Star Western #1 (August-September 1970) Final…"
1 hour ago

The Baron replied to The Baron's discussion The List of 870 Super-Heroines
"I'm not against "duplicates", per se, I've got three "Storms" onnthe…"
2 hours ago

JD DeLuzio replied to Alan M.'s discussion So, What Are You Reading These Days? (besides comics)
"Eric Choi's Just Like Being There-- Hard SF from the award-winning author and aerospace…"
3 hours ago

Travis Herrick (Modular Mod) replied to Alan M.'s discussion So, What Are You Reading These Days? (besides comics)
"They do explain why they didn't choose Sgt. Rock, though. It was also, supposed to be out…"
4 hours ago

Jeff of Earth-J replied to Steve W's discussion A Cover a Day
"Moving to a new volume is like losing one's virginity: once it's done, there's no…"
6 hours ago

Jeff of Earth-J replied to PowerBook Pete, the Mad Mod's discussion Anything, Everything, or Nothing At All
"I think the term "comic book industry" is an oxymoron. I always say "comic book…"
6 hours ago

Dave Palmer replied to PowerBook Pete, the Mad Mod's discussion Anything, Everything, or Nothing At All
"Some perspective on the size of the comic book industry.  On the radio today I heard that in…"
7 hours ago