The Justice Machine fought to destroy tyranny on two worlds--but nearly twenty years ago they vanished, never to be seen again.  Until now! The Machine's explosive return plunges them into a nightmarish landscape of two realities warring for dominion! The team races to thwart a dark destiny awaiting all humanity if they fail to stop an unspeakable evil from gaining a foothold to the future!

Painted front and back covers by Jeff Slemons!  Special features include a history of the Justice Machine with artwork by Adam Hughes, Darryl Banks, Robert Castro and Jack Kirby! Inspired by the sci-fi cult films of the 1950's comes a brand new space-tastic adventure. A bunch of scientists decide to take flight to the moon and discover a race of alien women ruled by a fierce and sadistic queen.

Brand new digital edition featuring a cover by famed comic book artist Graham Hill and never before seen pin-ups.  The story of Kurt Cobain retold in this comic book which was featured in Time, Rolling Stone and Billboard Magazines! . Nirvana frontman's life from his early days to his battle with overwhelming fame and the pain he suffers mentally and emotionally. Tortured by success and struggled with an addiction to drugs before his death at the age of 27.  Kurt Cobain Music lives on till this day.

From the sold out "Female Force" series about female empowerment.  Perhaps no single individual has left as indelible an impression on the culinary world as Julia Child. She charmed millions of television viewers worldwide with her infectious passion for cooking and eccentric personality. The latest issue of Female Force will transport you back in time, through Child's days in Paris where she learned to cook at Le Cordon Bleu, as she wrote her famous cookbook, Mastering the Art of French Cooking, and to her days as a popular television host. This special app is available only on Tunes, Google Play, Kindle and Nook! 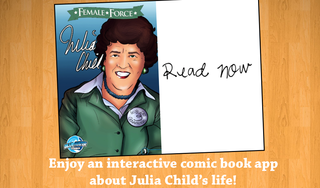 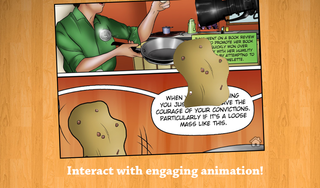 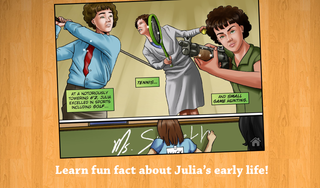 You can get the print copies at Comic Flea Market by clicking here: http://bit.ly/ZlD5Bs

The Justice Machine? Wow, I never thought I'd see them again...

I've got a few old issues, and i don't think any two are from the same publisher! I'm curious how they ended up at Bluewater ...

Tell me about it. If I see this, I'll give it a look-see. I still have my Palladium Books sb on them.

The Justice Machine? Wow, I never thought I'd see them again...

I think the handful of issues I have were published by... Comico? Does that sound right? I was buying a fair amount of Comico in those days. (And have since cursed myself for not venturing a couple towns away and seeing if I could intern for them!)

ETA: Yeah, looking at the GCD, it's the beginning of the Comico run that I own.

Ehh...I hate to put it this way, but the art... It looks like it's from Bluewater.

...Wasn't there another revival of the Justice Machine announced a few year ago but never realized ?

I seem to recall the subject coming up ~ unless it was another one of these " Me too ! " super-hero teams from the early 80s ~ the Elementals , the New Wave  the Southern Knights !!!

And tending toward awkward " not quite there " art ~ Okay , a lot of 80s titles of this general type tended to present art that , I think sort of attempted DC/Marvel-style slickness without the bits of production that made the package complete ~ , while the writers tended to be on their way down from the Big Two . One Southern Knights I remember having was a touch different from this , their origin OGN which I recall having at least a bit of character , in a 70s-style bit of homemade look...........I get the feeling that a lot of these titles were company-owned attempted " cash-cow " exceptions put out by generally creator-owned oriented companies trying for - Well , a said " cash-cow " . - a bit of a " reaching ou to the general audience/giving in to the exigencies of the market a little bit " ?

I get the impression