There was a case where parents claimed their kid had eaten a cocaine-laced candy bar. Turned out they were trying to cover up that she'd gotten into her uncle's stash.

The razor blade in the apple scare began back in the late 1960s and some of them were true, although a lot of them came from family members. Nowadays, nobody in their right mind gives out apples or other home-made treats or open food of any kind as a result.

Some places go so far as to hold "Trick & Trunk" events, where kids and their parents gather in a parking lot and go from car to car to get candy, while other suburbs (including my brother's) MOVE Halloween to the earlier weekend so it can take place in the afternoon from 1 to 4 p.m.

I'm glad I grew up when I did!

I wonder if the growing number of tv viewers also played some role in the decline of comics purchasing as potential comics buyers had more entertainment options to fill their free time.  My parents, btw, were teens in the 1950s (dad born in 1940, mom in '43) and both came from fairly poor families and neither had a tv until after they had married in 1961 (I came along a year later).  If they wanted to watch tv when they were kids, they had to go to the home of a somewhat wealthier friend or relative.  For my brothers and I, we always had tv in the various homes we lived in, although that didn't keep me from buying comics.  Still, maybe many of the older comics readers, the military veterans, kicked the habit when they could get escapist fare from the boob tube and I'd imagine when comics were tamed & dumbed down in the mid-50s,they probably got too boring for most of them.

The biggest year in sales history for comics was 1953. 1954 was second or third. After that it drops off a cliff. I don't think bad publicity was hurting the industry as much as has been assumed here.

And, yes, the Code knee-capped the industry. It outlawed what was bread-and-butter for not just EC but a lot of the smaller publishers. They had to cancel their best-selling books because they wouldn't pass the Code, and without a Code stamp you didn't get distribution. (Dell, as noted, was an exception.)

EC couldn't get distributed even when it produced Code-approved books. Without distribution, it was doomed.

The distributors gained even more power as they shrank the industry, because the Code drove so many books out of the market that a great many publishers went out of business, which had a domino effect on distribution, which also lost some players. The remaining distributors were able to determine what got distributed and what didn't -- and what did get distributed wan't much.

You'll recall that it was 1953 when Fawcett threw in the towel on Captain Marvel -- because it saw the handwriting on the wall and was getting out of the comics biz. Other publishers that went out of business or dropped their comics arm from 1953 to around 1958 are Ace, Ajax/Farrell, Comics Magazine, Comics Media, Eastern Color, EC, Farrell, Fiction House, Hillman, Lev Gleason, Magazine Enterprises,  Mainline,  Orbit, Standard, Quality, St. John, Star, Superior, Toby Press and Youthful.

The Code was responsible for most of this. What it didn't kill directly it killed by distribution or by reducing the remaining field to banal crap that even kids didn't want to read.

The tameness of the comics probably drove most older readers away in the second half of the 50s, but sales were down before that. There was also a perception, which lingered for many years, that comics were only for kids and mental midgets. The shorthand used on TV and the movies to show someone was hopelessly immature and/or stupid was often to show them reading a comic book.

I don't think TV hurt the comics directly. Video games and hand-held computers/smartphones have driven kids away from reading comics and anything else they aren't forced to read. Associating reading with forced behavior hasn't helped.

The direct market, while it saved comics, has also made comics something that have to be hunted. When all comics were distributed everywhere, a non-reader might make an impulse purchase of a comic with a good cover and turn into a life-long reader. Because comic stores buy non-returnable comics, unless they have deep pockets they will only order what sells to their existing customers, narrowing the variety of comic genres available even if someone manages to find a store. Trade paperbacks in bookstores are more likely to be found by someone who likes reading, if they can find a bookstore.

Thanks to everyone for their comments.  I realized my review could spark a debate and I'm glad I finally got round to writing it (even if I did delay the review for two months!)  I'm especially grateful for the long post from Captain Comics. It was extremely well-written, detailed and to-the-point.  The Captain's and my point of view differ and I applaud that  - vive le difference - as my friends in France would say.

I'd only seek to make one further point -  in 1955 British Parliament passed The Harmful Publications Bill (Children and Young Persons), seeking to protect the nation’s innocence. The Act (which was repealed in 1969) applied to any book, magazine or other like work which was of a kind likely to fall into the hands of children or young persons and consists wholly or mainly of stories told in pictures (with or without the addition of written matter), being stories portraying the commission of crimes, acts of violence or cruelty; or incidents of a repulsive or horrible nature “in such a way that the work as a whole would tend to corrupt a child or young person into whose hands it might fall.”

Those breaking the law faced imprisonment for a term not exceeding four months or a fine and, of course, the offending comics would have been destroyed.

Therefore in Britain an Act of Parliament forbade the importation of "horrible" comics for a period of 14 years.  No such Act ever saw the light of day in the US. Publishers voluntarily introduced their own code, for fear that legislation might follow if it didn't.

Maybe UK society is (or was) more repressive than US society. It took an Act of Parliament (in 1959) before D.H. Lawrence's "Lady Chatterley's Lover" was finally published here - 33 years after it was written and 32 years after it was published abroad.  Maybe my point of view stems from the place where I grew up, rather than the result of logical and objective thinking.  Who knows?

I believe US publication of Lady Chatterly was about the same time.

Book and magazine publishers will often self-censor to avoid bad public relations. Prohibiting the publication of anything in the U.S. would violate our Constitution.

Resurrecting an old thread here. In 2017 I asked other participants to recommend books about comics that I didn't already own.  Someone recommended "Kirby King of Comics" by Mark Evanier.  All is quiet here in the UK at the moment, as we're in the middle of our 2nd lockdown. I therefore bought the Kirby book on eBay last week (20 pds, a bargain) to cheer me up and it arrived today.

What a superb book! I've now read 80% of it, and there's lots of stuff that I didn't know about Jack that I now know. What an interesting man! And the pictures in the book are stunning!  Many Kirby covers that I'd never even seen before (although I'm sure I'd have spotted they were Kirby covers in a lineup).  And the paper it's printed on is superb! Thick and vellum-like.

I heartily recommend it to anyone who hasn't already got a Kirby book in their collection. Incidentally, I have the revised 2017 edition. Whether it's any better than the original 2008 version, I cannot say. 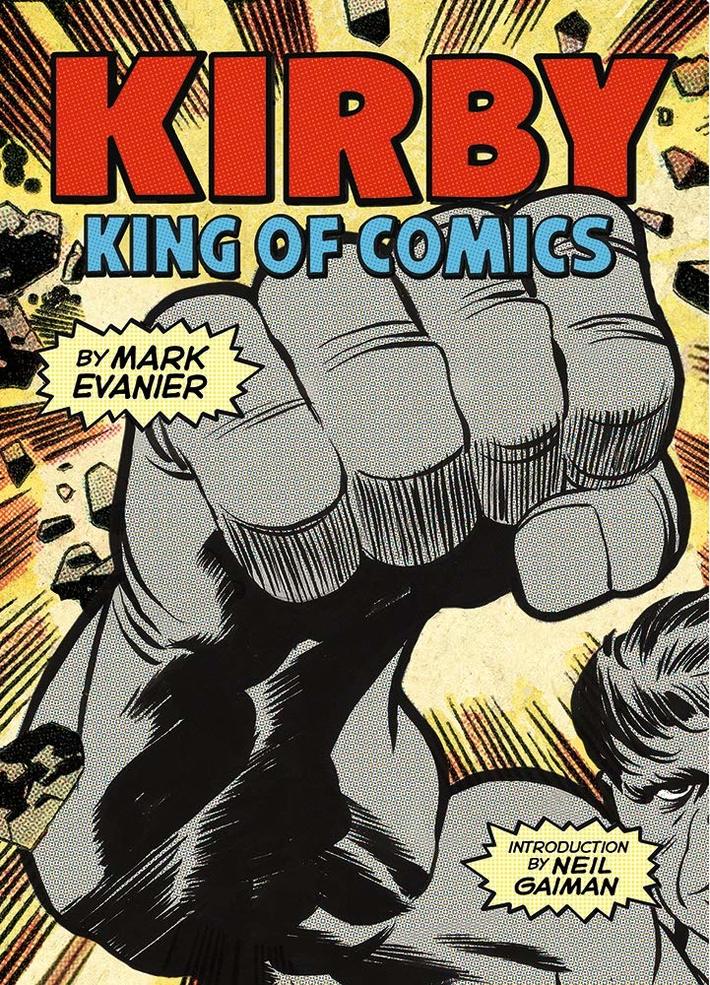