I was answering questions on my tablet tonight instead of my laptop, and as I thought I was posting the answers, I hit something that said I wanted to delete the whole thread. And since it was waiting on me to post, and I wasn't used to doing this on the tablet, I clicked OK. And then it stalled, I realized what I'd done, and hit Cancel! Cancel! as often as I could...but it was too late. The thread was gone -- not just the post, but the entire thread -- and I don't see any way of bringing it back. I'm going to email Ning's support team to see if there's any way of retrieving it, but I think it's gone.

In the meantime, all I can do is apologize profusely. Using my laptop, before I do any more damage. I'm so sorry, guys. Believe me when I say I'm mortified.

I'll recap the questions I've been asked down below, so we can proceed, but hopefully I'll get word from Ning on whether anything can be done in the next day or so.

OK, since Luke had the foresight to keep a copy of the rules handy, I can reproduce them here...in bold!

I thought this game might work. The player holding the chair selects a character. The challenge for the other players is to guess who the character is. They get twenty questions.

All questions have to have to be framed so as to allow the answer "Yes" or "No". The chair can give extra information if he or she chooses, and frame an appropriate response if neither answer fits.

Players may only ask a fifth consecutive question if four hours have passed since their last one. (Since the guess, not the answer.) The first player to guess the answer takes the chair.

(revisions made to rules)

Was the character introduced in the 1990s?

Was the character introduced in 2000 or subsequently?

8) Was the character introduced in 2000 or subsequently?

My fourth question: was the character introduced in the period 1986-1989?

Just bumping this up a bit...

Is it Eric Strauss, who with Linda Strauss was the second Dr Fate?

Eric was a 10-year-old boy who was aged into a man and became Dr. Fate (along with his stepmother/soulmate* Linda) to replace Kent Nelson in the 1987 miniseries by J.M. DeMatteis and Keith Giffen. It was a two people/one hero, Firestorm-style deal -- so they were a superhero team, but this version of Dr. Fate never joined a team... though I think they had a guest appearance in Justice League America. Eventually, Eric is killed and reincarnated, and Linda carries on alone without him for a bit... until she's also killed and reincarnated. (Or rather, their souls went into existing adult people, rather than them coming back as babies.) It's all deeply weird, but also sweet and soulful and wacky in the JM DeMatteis kind of way. I need to reread it. 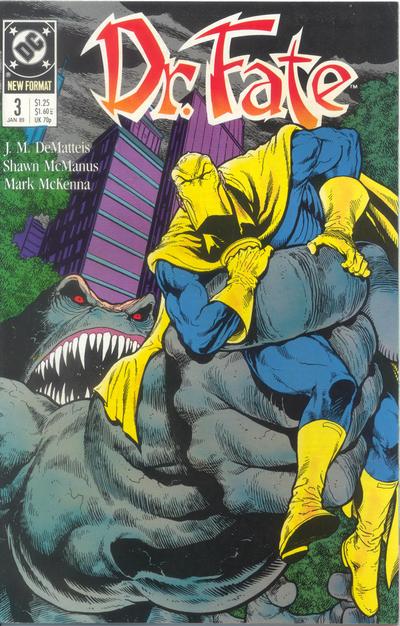 *Just in case you thought Hal Jordan and Arisia cornered the market on that sort of thing.

This hero knew how to use his noodle.

Was the character from the Golden Age?

Was the character created by DC/AA?

Jeff of Earth-J replied to Wandering Sensei: Moderator Man's discussion What Comic Books Have You Read Today?
"I bought The Deadly Foes of Spider-Man back in the day and I have never read it. It is one of the…"
4 minutes ago

Jeff of Earth-J replied to Jeff of Earth-J's discussion T.H.U.N.D.E.R. Agents
"IDW: As I mentioned, I began tradewaiting with DC v2. Consequently, as a tpb of DC v2 was never…"
18 minutes ago

Jeff of Earth-J replied to Peter Wrexham's discussion Celebrity Mastermind - "The History of DC Comics"
"...but not "comics' [or mankind's] blood-curdling masculinity.""
1 hour ago

JD DeLuzio replied to Steve W's discussion A Cover a Day
"This month, Betty and Veronica work as Candy Stripers at the hospital while Archie and Jughead…"
1 hour ago

The Baron replied to Steve W's discussion A Cover a Day
"Although he was much hetter known as a cartoonist, Dr. Tezuka was an MD as well, so this fits the…"
8 hours ago

Luke Blanchard replied to Peter Wrexham's discussion Celebrity Mastermind - "The History of DC Comics"
"If I might nitpick, answer-to-question-#6 didn't debut until 1941."
8 hours ago

Philip Portelli replied to Wandering Sensei: Moderator Man's discussion What Comic Books Have You Read Today?
"THE DEADLY FOES OF SPIDER-MAN #1-4 (1991): the precursor to The Superior Foes of…"
9 hours ago