For more information on Best Bets and other titles,
consult the "This Week's Comics" section below.

ADVENTURES IN OZ VOL 1 ($34.99, IDW): Eric Shanower was born to draw Oz books, and by some amazing convergence of good luck and good decisions, he is.

ANGELA: ASGARD’S ASSASSIN #1 ($3.99, Marvel Comics): Angela has been revealed in the “Original Sin” crossover to be a deep, dark Asgardian secret – a hidden sister of Thor, exiled to a Tenth Realm in an Asgardian cosmology that until now was thought to only have nine realms.

But her real-world origin is equally surprising: She was a Neil Gaiman creation when he was guest-writing issues of Todd McFarlane’s Spawn comic book, and when McFarlane claimed ownership, Gaiman took him to court, where Angela has been tied up for years. That legal wrangling is over, and now Angela has re-appeared at Marvel Comics, of all places, being written by off-beat writer Kieron Gillen.

So, yeah, I’m a little curious.

ESSENTIAL HARVEY KURTZMAN VOL 1: HARVEY KURTZMAN'S JUNGLE BOOK (HC, $24.99, Dark Horse/Kitchen Sink): As I say in an upcoming column, this book is famous for how influential it was, and infamous for how out-of-print it stubbornly remained. Dark Horse has fixed the last part, and I suspect we’re all going to go “Oh, so that’s where that came from” a lot when we read it.

PRIDE OF BAGHDAD DELUXE EDITION (HC, $24.99, DC Comics): This graphic novel follows a pride of lions who escape from the Baghdad Zoo during one American invasion or other. That might seem like a flimsy premise, but in the hands of Brian K. Vaughan and Niko Henrichon it’s a story that will engage both heart and mind, and one you will never forget.

SHAFT #1 ($3.99, Dynamite): Dynamite has assembled an impressive group of creators who could make this an awesome book. OTOH, the concept may be so dated and so tied to blaxploitation that no one can make it work. I'm eager to find out!

VALIANT-SIZED QUANTUM AND WOODY #1 (One-Shot, $4.99, Valiant Comics): When it looks like Earth is going to be destroyed by an asteroid, Woody (of Quantum & Woody, the world’s worst superhero team) chooses the obvious (for Woody) plan: He flees into another dimension.

But, as we know from every Marvel and DC comic book ever, there are jillions of parallel worlds, with duplicates of every character ever conceived, so yeah, there are a lot of other Woodys out there – all with the same idea.

If that doesn’t sound like 40 pages of non-stop hilarity to you, then I just don’t know who you are any more.

Archie knows that Veronica has a long Christmas list -- but what does her dad want for Christmas? Veronica and Archie set out to buy Mr. Lodge, “the man who has everything,” an extra special gift. But when Mr. Lodge notices the two sneaking around and plotting behind his back, he gets the idea that the two are planning to elope -- and hijinks are sure to ensue! What will Mr. Lodge do? And most importantly, what will Archie and Veronica get him for Christmas?

Nice to see Arch alive again after reading the last two issues of Life with Archie!

The night before Christmas Eve one of Santa's less-famous reindeer, Flander, hopes to have a chance to make the team in case there's a last minute cancellation by one of the top nine. He goes out for a test flight and gets lost in a terrible snowstorm -- and winds up literally “crashing” at Archie’s house! Now it’s up to Archie and Vegas to get Flander back to the North Pole. See if they can fix this Christmas conundrum in “It Looks Like Reindeer!” the all-new lead story to this comics annual!

Get ready for the BOOM, baby! The NEW HIT ONGOING SONIC COMIC BOOK SERIES from Archie Comics continues here with Sonic Boom #2: Knuckleduster! Race along at Sonic speed with the blue blur and his pals Tails, Knuckles, Amy Rose and the newest edition to the team—STICKS! But is there a traitor in our heroes’ midst? Say it ain't so! Find out in this sensational second issue, featuring explosive new cover art from Sonic art legend Patrick "SPAZ" Spaziante, and a super-special "SONIC SPOTLIGHT" variant cover by artist T.REX! Be sure to pick up this next exciting chapter and own a piece of Sonic comic history! 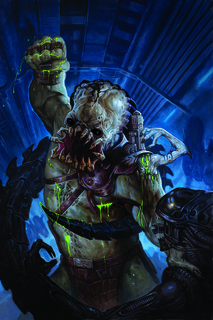 When a Predator is exposed to a mysterious genetic accelerant, the rest of the hunting party is put in unforeseen peril. And as the android Elden continues his violent evolution, his xenomorph allies reject him from the hive. 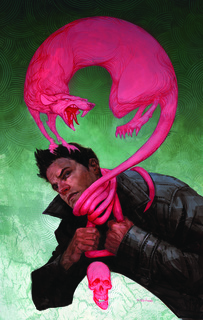 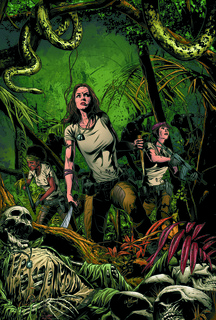 Clearly in a magical mire with Amy the Rat, Angel brings in backup to shut down the witch and save Magic Town ... Faith is reunited with Riley in a brawl with the tribal vampires -- staking, dusting, and feeling awkward! 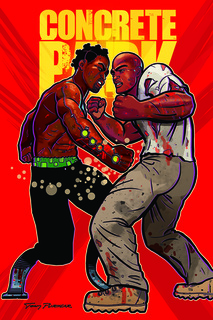 As Scare City tears itself apart, Isaac must fight his enemy from Earth in the Big Top arena. But how can he defeat the “Six Hundred Dollar Man”? Concrete Park—a dark, sexy sci-fi saga by Tony Puryear (Eraser) and Erika Alexander (Living Single)—continues its R-E-S-P-E-C-T arc!

“The swagger of the characters and their surroundings just burst off of the page.” -- Read about Comics Harvey Kurtzman’s Jungle Book (#26 on The Comics Journal’s Top 100 Comics) is a “lost” classic. Crumb, Spiegelman and Gilliam, among others, were inspired and influenced by Kurtzman’s masterpiece. In a deluxe hardcover, this collection is back in print after twenty-five years! Includes an introduction by Gilbert Shelton, an essay by Denis Kitchen, and a conversational afterword by Pete Poplaski and Robert Crumb!

• The first volume in the Essential Kurtzman library!

• The definitive version of this influential classic from the creator of MAD! 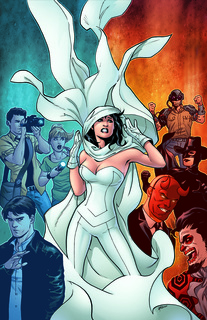 Ghost’s war on crime in Chicago is attracting the interests of the city’s powerful -- and her friends may pay the price. A gruesome new villain is revealed, who offers to help the movers and shakers rid themselves of “the lady in white” and let them return to crime as usual!

“In short: it easily earns the right to be highly recommended.” -- Unleash the Fanboy 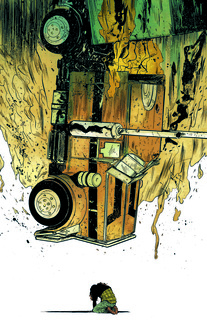 ONE HELL OF A ROADBLOCK!

Two years after Trace and Ward’s truck of top-secret cargo was driven off an overpass, Ward runs the Ghost Fleet from a hidden bunker. But Trace has reappeared ... a one-man militia with a trigger finger that’s itching for revenge!

From the critically acclaimed writer of Buzzkill! 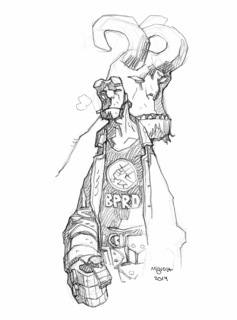 A bizarre series of murders and rumors of something worse lead Professor Bruttenholm to send a young Hellboy to a Brazilian village on his first mission. Hellboy and a small group of agents uncover something terrible in the shadows of a sixteenth-century Portuguese fortress . . .

• Mike Mignola named one of “12 Vital Creators to Watch” by LA Times!

"Alex and Hellboy are a match made in heaven. Alex is one of the truly great comic book artists of this generation and the Mignola universe is going to show a whole different side to his genius.”  -- Brian Michael Bendis 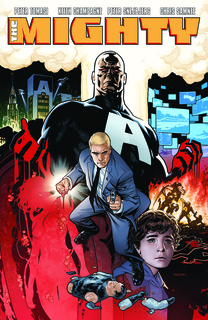 The world’s only superhero returns!

As the world’s only superhero, Alpha One has become an icon of hope in uncertain times. But while the population is inspired from a distance by their savior, police captain Gabriel Cole has gotten close enough to discover that Alpha One’s plans for a utopia are more radical than anyone suspects! Collects all 12 issues of the acclaimed series!

• For fans of Powers, Ex Machina, and Irredeemable!

• Check out new installments of The Mighty in DHP next month! 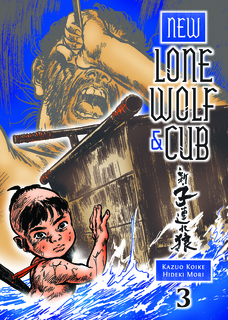 Kazuo Koike returns to Lone Wolf and Cub with his twenty-first-century sequel, New Lone Wolf and Cub. Samurai Togo Shigekata has brought the dead Lone Wolf’s son, Daigoro, to an oasis of safety, the warship of Togo’s master, the lord of Satsuma. But when Togo is accused of treason, all hell breaks loose!

• Over one million copies sold of the Dark Horse Lone Wolf and Cub editions.

• Lone Wolf and Cub omnibus program is collecting the entirety of the original series in value-priced editions. 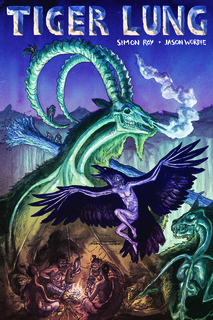 Thirty-five thousand years ago, the world was ruled by strange beasts and ancient gods! For some Paleolithic tribes, hope lay in the shaman warriors who stood between them and the unknown. Tiger Lung follows the struggle of one of these shamans to keep his people alive in a vast, hostile universe! Collects the Tiger Lung adventure from Dark Horse Presents #21-23, along with two bonus stories.

• Collects “Beneath the Ice,” bonus stories and additional material!