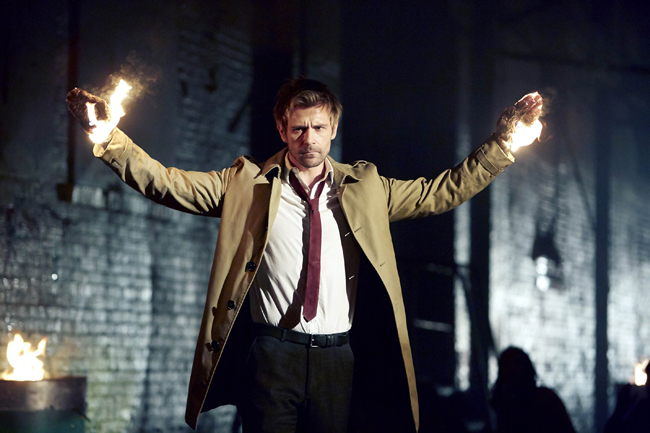 Like in the comics, it appears Constantine’s magic is minor, and his real “powers” are fast-talking and occult knowledge.  Quantrell Colbert/Warner Bros. Entertainment Inc. 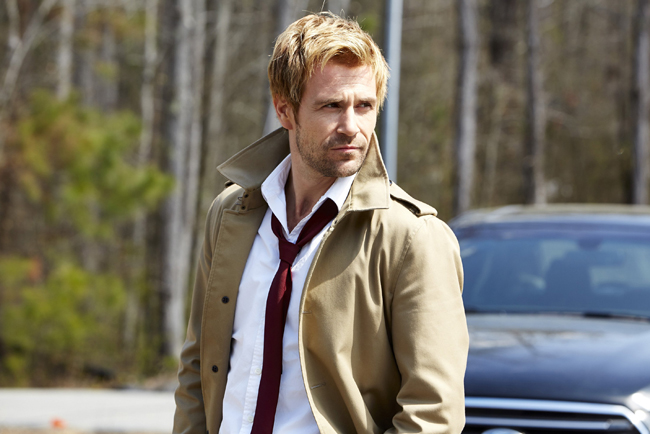 How Constantine behaves is up to the writers, but actor Matt Ryan certainly looks the part. Quantrell Colbert/Warner Bros. Entertainment Inc. An otherworldly visitor has words with Constantine in the show’s premiere. Quantrell Colbert/Warner Bros. Entertainment Inc. 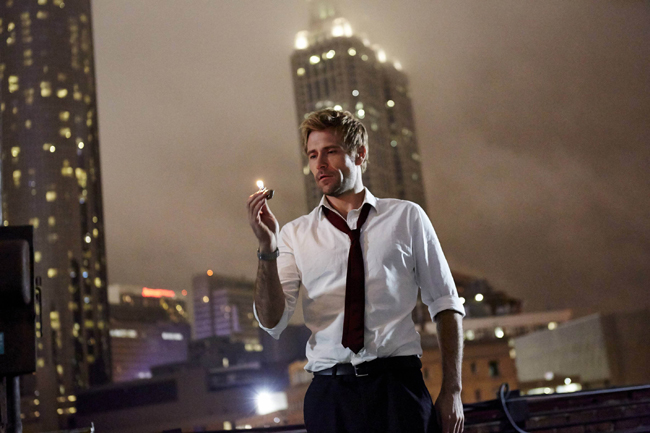 It appears Constantine won’t be smoking as much on TV as he does in the comics, but he still has his Zippo. Quantrell Colbert/Warner Bros. Entertainment Inc.

The one I’m worried about isn’t John Constantine, the comics character who had a 300-issue run in his own title at Vertigo, DC Comics’ mature-readers line, plus numerous miniseries, annuals, specials and one-shots. The one who has recently been given his own title, plus the spotlight in Justice League Dark in DC’s regular superhero line. No, that guy knows how to get out of a scrape, and has been a success story from day one.

Keanu Reeves couldn’t pull it off. He starred in the movie Constantine (2005), in which the stoic actor portrayed Constantine as a taciturn American, instead of the working-class, English con man he is in the comics. Which, to my mind, jettisoned everything likable about the character.

For example, the movie was partly based on a storyline called “Dangerous Habits,” in which the chain-smoking Constantine learned he had lung cancer. In the comics, Constantine looked for a loophole (as is typical), and instead came up with a complicated scheme whereby he offered his soul to three different lords of Hell. How did that help him? You’ll have to read the trade paperback to see.

In the movie Constantine had lung cancer – and survived it – also. But virtually everything else was changed from “Dangerous Habits,” including the ending, where Constantine did something very out of character – a moral, unselfish act – which accidentally solved all his problems. So instead of scheming and conniving and talking his way out of trouble, as the comics Constantine always does, the Keanu Constantine simply blundered to victory. Phooey.

Fortunately, the TV show doesn’t make the mistake of an American Constantine. He’s properly played as an Englishmen of the lower classes, and the actor who does so – Matt Ryan of Criminal Minds – isn’t American either (he’s Welsh). So that much of the Constantine mystique is intact.

Also, another constant in Constantine’s life is how often he gets his friends and acquaintances killed. He doesn’t mean to, but you know, things happen. Which is why the character Chas is so important. In the comics, he’s a cab driver who often takes the non-driving Constantine where he needs to go and – miraculously – has yet to be killed. Constantine doesn’t want to get him killed, either … but he still calls him up. And every time he does, the reader holds his or her breath. Is this the time Chas suffers the Constantine curse? Fortunately, Chas (played by Charles Halford) is in the TV cast.

As for the rest … well, it’s a bit of a dog’s breakfast, as Constantine would say.

In the comics, Constantine was briefly institutionalized after a mystic rite gone awry in a town named Newcastle sentenced an innocent child’s soul to Hell – and gave John a nervous breakdown. It’s a pretty defining element in the Constantine story, as morbid, oblique references to “Newcastle” were frequent in Constantine comics long before the writers got around to explaining what it was. However, the previews indicate that the TV Constantine institutionalized himself – something so mentally healthy, straightforward and self-aware that it’s hard to see the comics version doing it.

And chain-smoking, too, appears to be out, despite that being a constant with Constantine (along with his rumpled trenchcoat). There are still indications Constantine smokes some – the previews show him frequently fiddling with a lighter, later stubbing something out – but I gather he won’t be smoking much on camera. But that’s another variation hard to choke down, as chain-smoking demonstrates without words how little regard John has for his own health, and how he likes to annoy people. Plus, as noted, it’s a pretty serious plot point in “Dangerous Habits.”

But changes are always made when a property moves from one medium to another. So maybe none of this matters. And, after all, the most important part is there: Ryan comes off pretty well in the previews.

And if the show lasts, there’s so much terrific material to get to. There’s the story of the one that got away, a girl named Kit. There’s John’s niece Gemma, who goes from worshiping her uncle to despising him. There are all the angry people arising from John’s past, from his band mates in the ‘80s punk band Mucous Membrane, to the ghosts of all those he’s accidentally gotten killed.

And that’s just the people! John has consorted with a lot of angels and demons in his long run, too, most of whom hold a grudge. Not the least of which is the First of the Fallen – you may know him as Lucifer – whom John cheated out of a soul. Demons just don’t forgive things like that.

And, hey, if Constantine works, that could open the door to the huge library of magical characters at DC Comics. We might see backwards-speaking Zatanna, daughter of Zatara, the superhero magician of World War II. Or maybe Dr. Fate, guided by the spirit of the ancient Egyptian wizard Nabu, who has appeared once before on television (on Smallville). And we can only hope for Detective Chimp (yes, a talking monkey), the Dead Boy Detectives, bad-guy sorcerer Felix Faust, Swamp Thing, the House of Mystery, The Spectre, “I, Vampire,” Ragman, Blue Devil, Deadman and tons more.

All of which rests on the slim shoulders of Matt Ryan. Cross your fingers, everyone, and say “Bob’s your uncle” three times fast!

Meanwhile, one show based on comics no one needs to worry about is The Walking Dead, which launched its fifth season Oct. 12. Not only has it been awarded a sixth season already, but a spin-off show is in the works, showing survivors in some other part of the country.

That should be good news for those who resent their comics-reading fans constantly showing off their knowledge of things to come, because there is no Walking Dead spin-off in the comics. Whatever this new show will be called, it’ll be terra incognito for everyone.

About the chain-smoking, modern TV standards and practices won't allow it. Showing people smoking in the movies and on TV is believed to glamorize smoking, or some such. I believe -- and haven't looked it up -- that practice goes hand-in-hand with the consent decree from the mid-70s that banned TV commercials for tobacco products.

Now, if they really wanted to make a case that Smoking Is Bad, they ought to let Constantine the TV show do the "Dangerous Habits"story where he got cancer and sold his soul to not one, not two, but three demons -- who all begrudingly agreed to let him live because none of them wanted to surrender his soul to the other two nor fight the other two for it.

Now that I've seen three shows, it's obvious that this Constantine does smoke, but that they can't show it.