Surprised no one has started a thread on this, since I know there are Hellblazer fans around here. Of course this version of John Constantine is probably intended to be based on the New 52 version: I didn't see a Vertigo logo in the credits, just a DC one.

Constantine actually made the transition back to the DCU relatively intact. The main differences are no smoking, and frequent use of magic. In Hellblazer he did such a small amount of magic that it was often questionable that he could do it at all. He clearly preferred to get by on his wits, anyway. And he never used his fists.

Really good casting this time. Matt Ryan looks, acts and sounds just how I imagine Constantine. I like the rest of the cast, too, but none of them have nearly as well-defined a visual template to match up with. The first episode wasted no time establishing the most significant act in John's early life in magic: the failed summoning in Newcastle that damned young Astra to Hell.

His oldest friend Chas is on hand with his taxicab, too. The others aren't taken as directly from the comics. The appearance of the computer hacker Ritchie is a sufficiently obscure character that I'd consider it an Easter Egg.

The early scenes are set in England, as they should be. But the main action happens in Atlanta, of all places. Works fine, but I'll be curious if the location is ever explained. I don't remember that happening in this episode.

Off to a good start, all in all. I'll just have to accept Constantine doing lots of magic. It is more visual than him standing around smoking and looking moody.

.... I hear the next ep has a pretty grisly John's-a-bastard ending, which gives me hope.

The fourth episode, "A Feast of Friends," shown on November 14 had a pretty good John's-a-bastard ending.

That's the one I'm talking about. I'm behind in my viewing, and looking forward to it.

And he ain't apologetic about it, neither!

I'm hopeful they keep it going somehow, because I enjoy it. It's not perfect, but it's about as close to Constantine as network TV is going to get. A move to Syfy would probably give them more leeway in the story telling, so it could be a good thing.

My wife, who started out not caring for it, pronounced it "getting better, but not fast enough." Given that Friday's is the season (and possibly series) ender.

I've enjoyed it, and the last few especially. Sure, it's not as cynical as the real thing, but look at what they've done that was already unthinkable on network TV. Manny the angel should have some religious literalists exploding with outrage (Constantine isn't respectful! Manny is somewhat useless!). And in the last episode, Constantine was shown smoking -- twice!

One of the show's producers mentioned the possibility of the SyFy jump on Twitter the other day, which is probably where the speculation started.  He also mentioned that they may end up changing the show's name to Hellblazer if it actually does make the move.

Who knows, maybe SyFy will even let them start pronouncing his name correctly with the long "I" sound rather than the long "E" sound.

That was quite a twist at the end. I'm gonna be disappointed if we don't see what Manny's up to -- not to mention the clear foreshadowing of The Spectre, which I'd like to see, too. #SaveConstantine

NBC has made it official that Constantine is cancelled. The show is being offered to other networks.

Bummer. Fingers crossed on the other networks; there certainly are lots of other options nowadays. 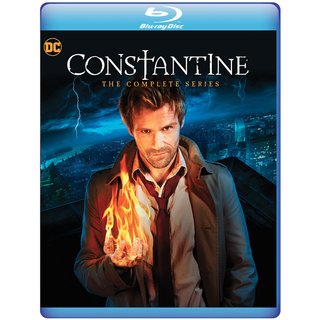 Darkness is rising, demons are everywhere … and one man stands between humanity and its worst nightmares: John Constantine. Warner Archive Collection (WAC) and DC Entertainment bring the live-action television series, Constantine: The Complete Series, to Blu-ray™ and DVD on October 4, 2016 via WBshop.com, Amazon and popular online retailers.

Based on the wildly popular DC character, seasoned demon hunter and master of the occult John Constantine (Matt Ryan) is armed with a ferocious knowledge of the dark arts and a wickedly naughty wit. He fights the good fight – or at least he did. With his soul already damned to Hell, he’s decided to abandon his campaign against evil … until a series of events thrusts him back into the fray, and he’ll do whatever it takes to protect the innocent. With the balance of good and evil on the line, Constantine will use his skills to travel the country, find the supernatural terrors that threaten our world and send them back to where they belong. After that, who knows ... maybe there’s hope for him and his soul after all.

Matt Ryan (The Halcyon, Criminal Minds: Suspect Behavior) stars as Constantine, a role he has since reprised for Arrow and as the voice of the animated character in the upcoming Justice League Dark.

“Actors don’t generally like to revisit their own filmed performances, but I really enjoyed watching the episodes myself because Constantine is such a bold, outright character – both to play and to watch,” says Ryan. “He’s this brilliant ball of wise-cracking, chain-smoking street magic – and it’s so much fun exploring his fascinating, dark world of torment and mystery. I’m happy the fans will now have the opportunity to experience the series on Blu-ray, plus all the bonus features.”

Writer Daniel Cerone (“The Mentalist,” “Dexter”) serves as executive producer with David S. Goyer (“Man of Steel,” “The Dark Knight Rises”). “Constantine” is produced from Bonanza Productions in association with Warner Bros. Television. The show is based on the wildly popular comic book character from DC.

6. The Rage of Caliban

7. Blessed Are the Damned

8. The Saint of Last Resorts: Part One

11. A Whole World Out There

12. Angels and Ministers of Grace

After a fashion ... "‘Constantine’ Back as Animated Series for CW Seed With Greg Berlan...

Randy Jackson replied to Captain Comics's discussion Bond #4: 'Diamonds Are Forever'
"I do agree with you Commander that the Moore films tended to be sillier and relied more on stunts…"
5 hours ago

Philip Portelli replied to Steve W's discussion A Cover a Day
""Not only that but your feet stink! Wear some socks next time!""
6 hours ago

Jeff of Earth-J replied to Jeff of Earth-J's discussion Tales to Astonish
"THE INCREDIBLE HULK #102 - "Big Premiere Issue!" The conclusion of this story takes me…"
7 hours ago

Lee Houston, Junior replied to Steve W's discussion A Cover a Day
"I guess medical comics can cover many genres. (Image courtesy of the Grand Comics Database.)"
7 hours ago

Steve W replied to Steve W's discussion A Cover a Day
"Allow me to introduce another nurse. Here's Linda Lark."
8 hours ago

Jeff of Earth-J replied to Steve W's discussion A Cover a Day
"Before someone beats me to it..."
9 hours ago