Constantine Vol. 1: The Spark And The Flame 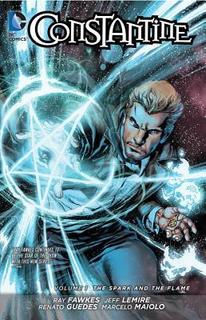 The first issue reintroducing John Constantine into the DC Universe in his own series opens with him leaving a bar, musing about the meaning of magic. A page later he's lighting up a cigarette, so it really feels like the Constantine we know and love. He's also musing about the role of superheroes, which is the main nod towards the DCU. Then we're quickly thrown into a magical quest. John and his new friend Chris fly to Sweden to retrieve the first piece of Croydon's Compass, an instrument that locates occult artifacts. As soon as they retrieve the compass needle a member of the cult called called the Cold Flame appears. It's a group of corrupt magicians, led by Sargon the Sorcerer, who John hasn't seen in awhile. Turns out the person calling herself Sargon now is Sargon's daughter, and she's powerful enough to kill Chris while Constantine escapes with the artifact. Chris must be the shortest-term of all of Constantine's doomed friends. More later: this is only the first part of the three-part title arc.

Permalink Reply by Richard Mantle on April 5, 2014 at 3:29pm
Yes but Mark, is it any good?
It might be sacriligious but I always thought he needed a bit of 'calming down' from his Vertigo days and I have really enjoyed him in Justice League Dark but without others to bounce off of he might grate a bit..?
Keeping my eye on this discussion for views as the trade is so very nearly on my wish list.

Patience, grasshopper! I plan to get a few more issues in before making those kinds of judgements..

HERE'S WHAT I SAY in a column about the "new" Constantine.

HERE'S WHAT I SAY in a column about the "new" Constantine.

Most of the rest of Constantine's quest takes place solo, but it's full of interactions with other DCU occult characters. In the second part he meets up with Mister E, who has acquired a distinct Southern U.S. accent I don't remember from before, as well as a somewhat different origin story. He was never a well-defined character, so no big deal. John escapes him, but must leave the needle behind. Next he encounters The Spectre, who informs him that he is "marked as the rightful target of divine vengeance." Our conman talks his way out of it (for now) by convincing The Spectre he is needed to fight the war against the Cold Flame. And he collects Croydon's Dial.

In the third part John returns to London, only to discover that he's been cursed: the city is killing him, literally. He calls on an old friend for help: Jules, a woman who he had been romantically involved with in the past, who is a fellow mage, and has a car. All of which makes her a bit of an amalgam of several characters from Hellblazer (Angie Spatchcock would be the closest match). After escaping another new character, a mystical villain called the Riddling Butcher, John sends Jules away (presumably to fight another day). He confronts the Blue Flame, and pulls off a classic Constantine "victory." No one gets Croydon's Compass, and he gets revenge upon Sargon for Chris's death.

This is the halfway point in the collection, and the end of the first big arc. It reads a lot like a Hellblazer story: Constantine is recognizably himself, and behaves in character all the way. There's a lot of exposition, especially at the beginning, but the writers were introducing the character to a broader audience than it had at Vertigo. They make a point of using DC's occult history, if not almost to overkill. I can't recall such a large cast of characters in any three issues of Hellblazer, and that's without including the newly created characters that are introduced. But having the action move more quickly is a plus. I'm enjoying it so far.

Mister E has had a couple of incarnations, none of them memorable. He's been heading toward "bad guy" territory for a while now, and was at the very least insane in his last appearance that I recall (A "Books of Magic" miniseries, I think). Of course, that was all pre-New 52.

But, hey, "Mister E" is just too cool a name to let the trademark lapse!

Yeah, I've read all of the Vertigo and proto-Vertigo appearances. The Books of Magic, his own 1991 miniseries, the Trenchcoat Brigade miniseries...and I don't have a clear picture of the character. So he's like a legacy character you can rewrite without worrying about upsetting anyone!

The remaining issues in the collection are single-issue stories, although only the first one is truly done-in-one. "All My Friends"shows John's attempt at a day off. He stops by his regular bar "The Joint" to see Lloyd, and winds up being interrogated by Papa Midnite. He gets out of there with a combination of magic and fast talk, and goes to see Zatanna. They are on the outs, but he's concerned enough to warn her about Sargon's daughter and her move to the dark side. Finally, he confronts the guy who has been tailing him all day, and uses the money taken from his wallet to help the store clerk he was being cheated at the beginning of the day.

Ray Fawkes takes over as sole writer on "Stealing Thunder," which is also "A Trinity War Interlude." That's enough to set off my anti-crossover alarm. There were references to the Trinity War (which went completely past me), but fortunately the story stands on its own pretty well. Constantine shows up at the bar with Billy Batson in tow, and tricks him into a temporary identity switch so Billy can't use the "Shazam" spell. John just meant to contain the power, but winds up having to use it to battle a demonically possessed member of the Cold Flame. In the midst of the battle there's some funny dialog with Billy trying to sound like Constantine. The story ends with John back in his normal form, but severely injured and possibly dying.

"Metamorphosis In Extremis" finds John in shade form, contending with the shade of recently-deceased Chris, along with members of the Cold Flame. Papa Midnite shows up and finishes the fight, finally agreeing to heal John as well. The final scene shows the mage Tannarak exulting in finding John's stash of magical objects, which was evidently his real goal. Lots of potential for future mischief there. I barely remember Tannarak from his few earlier interactions with Constantine; there's a substantial DCU history for him that I haven't read.

I feel like I went a little overboard with the summaries. In the end there are a couple of things that Constantine does in the series that are uncharacteristic. The first is the regular use of magic, in the form of spells, charms, and wards. While this seems perfectly natural behavior for a magician, in fact it was quite rare in Hellblazer. John got things done mostly on the sly, without much overt use of magic. It often seemed an open question whether he could even do magic.

The other thing is his use of physical violence. John does some street fighting in these issues, something I don't think he ever did in Hellblazer. It's not overdone, but it does make the character just a touch less enigmatic.

One more observation: the writers certainly piled on characters from Constantine's past and from the occult DCU in these opening issues. I have to wonder if they weren't thinking about the short lifespan so many New 52 titles have had. This way they got a crack at several iconic characters right away, instead of saving them for a "later" that may never come. It also allowed for much more character conflict than usual in Hellblazer, giving it more of a mainstream DCU dynamic.