'Crisis on Infinite Earths': Too much schmaltz, too much talking, but a lot of really cool stuff, too Jan. 16, 2020 — So “Crisis on Infinite Earths” has wrapped up. How’s everyone doing? Jazzed about that ending? Tired of all the whinging over Oliver Queen’s death? Wondering why The CW scheduled a five-week break between episodes 3 and 4?

That’s pretty much my takeaway. But I also took away a ton of notes about the cameos, comics references and funny dialogue. Let’s roll through them chronologically, just for the fun of it:

This is a lift from the comics, but not a direct one. In the comics, Maltus is the planet that gave rise to the race who would become the Guardians of Oa, and therefore creators of the Green Lantern Corps. Maltus was named for overpopulation prophet Thomas Robert Malthus (1766-1834), so there was a story in the ‘70s about it being overpopulated, because the ‘70s.

But it was actually introduced in 1965, when an ambitious scientist named Krona tried to see the beginning of time, which resulted in the creation of the evil, anti-matter universe of Qward. In 1985, Crisis writer Marv Wolfman expanded that story, saying Krona’s original sin created the entire Multiverse. It also created the Monitor and the Anti-Monitor, who were trapped by plot devices, before being accidentally released by Pariah.

The TV show keeps all the main beats of Wolfman’s update, including overly ambitious scientists — in this case, Mar Novu and Nash Wells — setting the Crisis in motion.

In the Speed Force, TV-Flash (Grant Gustin) meets Movie-Flash (Ezra Miller), who is supposed to have a solo film in 2022. It appears that Movie-Flash gets the idea for his name from TV-Flash, but I wouldn’t bet on the movies using that bit.

Oliver: “Dying is easy. The real heroes are the ones that have to keep going.”

These two episodes get metatextual more than once about Arrow being canceled. Later this line gets repeated and Oliver tells Barry, “just keep going.” It’s easy to interpret this as Stephen Amell (who plays Green Arrow) telling Grant Gustin (Flash) to keep the Arrowverse going.

Luthor to Mar Novu: “What do you say? A team-up? The brave and the bald?”

DC Comics had a title named “The Brave and the Bold” from 1955 to 1983 that specialized in superhero team-ups, especially Batman team-ups. Batman: Brave and the Bold (2008-11) was an animated take on the concept. 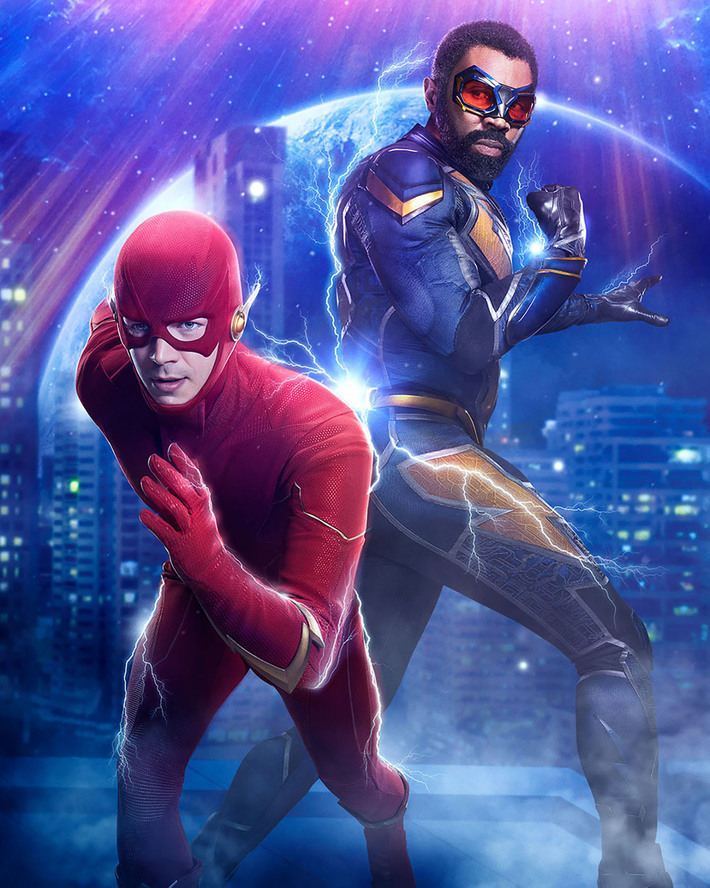 Mar Novu to Ryan Choi: “You are a remarkable individual.”

Yes, he is. In the comics, Choi replaces Ray Palmer as The Atom. It would not surprise me to see that happen to TV-Atom (Brandon Routh) on DC’s Legends of Tomorrow soon.

In the comics, Jim Corrigan is a murdered policeman whose spirit is chosen by “The Voice” to be the Angel of Vengeance. Eventually Corrigan passes the mantle, and goes to his reward. That seems to happen twice here, with TV-Corrigan (Stephen Lobo) passing the job to Ollie, who then passes it on to … someone else, I guess. It’s great to see The Spectre and all, but it would have been better if we’d seen the Ghostly Guardian bust some moves (he’s got really cool and terrifying powers)! The Spectre and Anti-Monitor fought by basically staring at each other. Maybe they ran out of F/X money.

Ollie/Spectre to A-M: “You have failed this universe.”

Green Arrow’s “You have failed this city” line gets flogged quite a bit in these last two episodes. It still doesn’t make any sense. 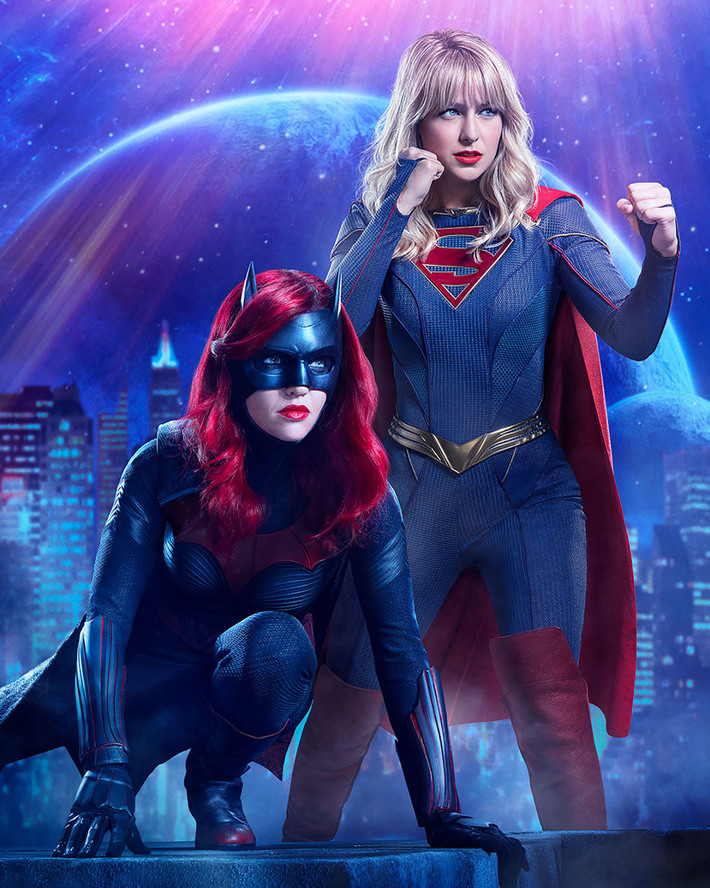 Ruby Rose is Kate Kane/Batwoman (left) and Melissa Benoist is Kara/Supergirl in “Crisis of Infinite Earths.” (Courtesy The CW)

Death Be Not Proud

Ollie dies again. You know, the second time doesn’t add anything, and all the frowny faces and boo-hooing gets plain sappy. In fact, I wrote “sappy” in my notes a lot during these two episodes.

Script Be Not Proud

I also wrote “too much talking” a lot.

Guy on Pier: “I just love it when you guys team up!”

Guy on Pier is played by Marv Wolfman, who wrote Crisis on Infinite Earths (and a jillion other comics).

J’onn J’onzz: “When we restarted the universe, our worlds combined. Only we Paragons know the difference.”

J’onn’s summary lays out the new world order: Batwoman, Black Lightning, Flash, the Legends, Supergirl and Team Arrow all live on “Earth-Prime” now. That is very much what the comics Crisis achieved, too.

Lady at Book Signing: “What should I call you?”

Another comics character. Not important at this time.

Ray: “We’d be sending him to (air quotes) ‘The Atomverse.’ ” Ryan: “I like to call it the Microverse.” Ray: “That’s better! Possible copyright issues, but better.”

Those copyright issues would be with Marvel Comics, which has had a Microverse since the 1960s.

Dinah Drake: “I got a ton of those shadow things gathering on Gardner Pier.”

That’s a reference to Gardner Fox, co-creator and longtime writer of the Justice Society (1940s) and the Justice League (1960s).

The Martian Manhunter’s new outfit is very inspired by the comics, but I bet it’s also got the hidden power of letting actor David Harewood go into action as himself, without the need for CGI to turn him into a green, pointy-headed alien. 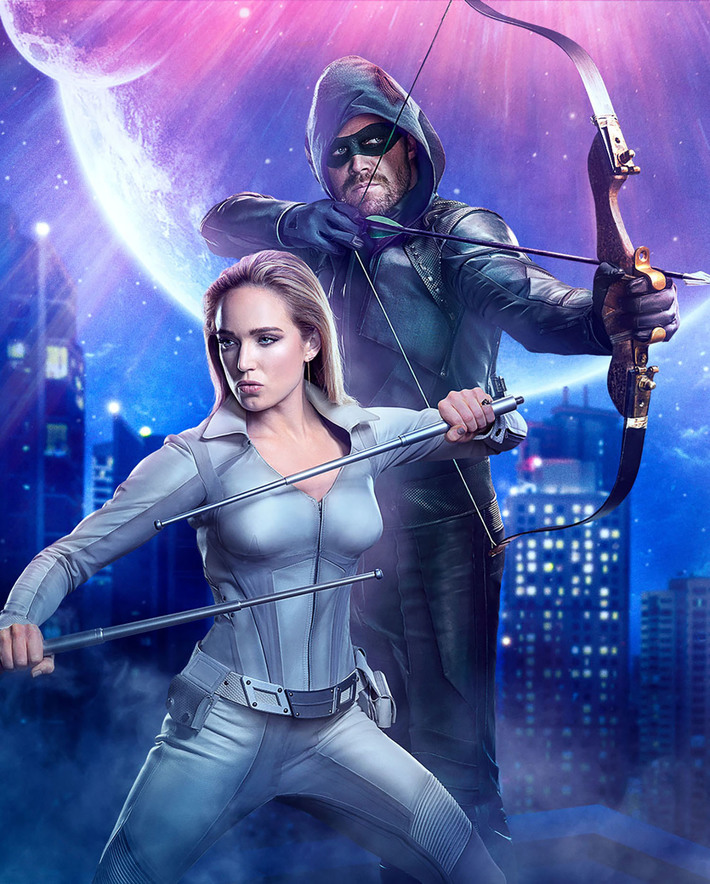 Aside from the Jaws reference, the Anti-Monitor getting really big happens at the climax of the comics Crisis too.

Dinah: “Shadows are on the move again. Perez Landing.”

A reference to George Perez, who drew Crisis on Infinite Earths.

Death Be Not Proud II

It sure looks like Supergirl is about to sacrifice herself for her cousin, just like in the comics, and they play sad music to let us know it. But unlike the comics, Atom shows up and sciences Anti-Monitor away.

Be fruitful and multiply

Diggle now has two children, a boy and a girl. Superman now has two boys. Both have doubled their previous bounty.

“Worlds will live, worlds will die …” And then they’ll all come back.

So, after all that, the Arrowverse didn’t get rid of the Multiverse after all! Well, that’s probably smart – DC eventually restored its Multiverse, because it’s such a great idea. TV just skipped the middle part.

Here are all those worlds we saw at the end:

Also, that exterior shot is definitely the Hall of Justice, as confirmed by the Super Friends theme song. Gleek, the escaped monkey, is also from Super Friends. Can Zan and Jayna be far behind?

What's It All About, Ollie?

So “Crisis” achieved its main goal — putting all the Arrowverse shows on the same Earth — even if it didn’t eliminate the Multiverse. And it gave us a Justice League, even if it isn’t called that (yet).

That’s almost worth two hours of everyone moping over Ollie’s second death. Come on, gang, didn’t you get it out of your system the first time?

Here are some group shots, generally of characters staring off camera, just because I'm generous that way. All art copyright The CW. 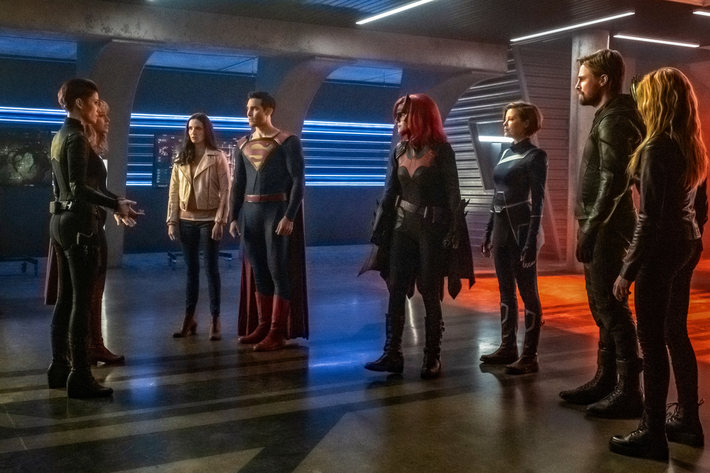 I agree that they could have dialed back the schmaltz a little bit -- even though it was aimed squarely at me. They didn't need to get everyone's appreciative grin at the JLA roundtable... it smacked a bit of Hobbits jumping on the bed in slow-motion at the end of Return of the King.

But that said, this show made me jump and yelp and cheer out loud. Any nitpicks I have with it are infinitesimal to the sheer joy it gave me.

You know, the endless Green Arrow farewells reminded me of the interminable end of Lord of the Rings, too! I didn't make the comparison in the story, because I didn't think it would strike anyone else that way. Looks like I was wrong!

Permalink Reply by Doctor Hmmm? on January 15, 2020 at 11:06pm
The whole "Atomverse"/"Microverse" thing got me thinking.
In honor of Oliver Queen's heroic sacrifice, I think we should stop calling it the Arrowverse and start calling it ... wait for it ... the Oliverse!
Right!

When I see Ezra Miller, I don't see The Flash -- I see Impulse.

As for the costume, it's a moviemaker's idea of what a superhero should wear, going back to Michael Keaton's first Batman movie. Never mind that body armor for a guy who fights all the time is impractical and bulky -- not to mention so stiff that he couldn;t turn his head in it!

Body armor for a runner makes even less sense.

(There was an offhand comment in the Justice League movie that The Flash's Impulse's armor is made from heat- and friction-absorbent materials akin to what's used on the space shuttle, but that begs any number of questions, like where can he get that stuff, and wouldn't it be too heavy? "The Speed Force" is a much simpler and neater explanation.)

Luthor didn't win a Pulitzer; he was given a Nobel Peace Prize. I thought it odd that it was at a press conference in Metropolis, and not an award ceremony in Switzerland, with the attendees in the most formal of formal wear -- and that distracted me from the oddness of the notion that Luthor even got the award.

From the wink he gave Kara at the press conference, I take it he remembers what happened, even though I'm sure J'onn wouldn't have gone to him and restored his memory, as J'onn did for the other participants in Crisis. Are we supposed to expect that we'll see more of Luthor on Supergirl going forward?

TV Line says the Ezra Miller cameo happened after filming had wrapped ... at the request of bigwigs at Warner/DC: "'Crisis on Infinite Earths' Burning Qs Answered!"