If you’re a genre fan, Disney+ is going to get your money.

The new streaming channel doesn’t launch until Nov. 12, but the House of Mouse held its biennial D23 Expo Aug. 23-25 with enough juicy announcements to make Lockjaw salivate. Disney+ will have both new and legacy content from all its major brands – Disney, LucasFilms (Star Wars), Marvel, National Geographic, Pixar and Fox (The Simpsons) – but it was the Marvel and Star Wars plans that had fans swooning.

Especially the former. The Marvel Cinematic Universe has been an unprecedented success, as anyone who hasn’t been held captive in a cave by the Ten Rings already knows. And what Disney does better than anyone is leverage success.

That’s why four Marvel miniseries had already been announced for Disney+ before D23, series not produced by Marvel Television (Agents of SHIELD, Runaways), which has been crippled by the loss of its Netflix line (Daredevil, etc.). Nope, the TV shows are being produced by Marvel Films, and are not only set in the abovementioned MCU, not only blessed with movie-size budgets, not only produced by the now-legendary Kevin Feige, but also featuring the same big stars that glitter on the silver screen.

Then, at D23, Marvel announced three more shows. Yes, I’ll give you a moment to compose yourself.

Those shows are Moon Knight, Ms. Marvel and She-Hulk. None are household names … but neither were “Guardians of the Galaxy” once upon a time. Here’s a leg up, so you know what to expect: Moon Knight has had a lot of series, and in this one from 2011 the Lunar Avenger begins manifesting the personalities of Captain America, Spider-Man and Wolverine.

Moon Knight is usually referred to as Marvel’s answer to Batman, but he’s a whole lot weirder than that. In 1975, he was introduced in Werewolf by Night as a lycanthrope-hunting mercenary whose white-and-black costume and equipment contained a generous amount of silver. (If you don’t know that werewolves and silver mix like dogs and cats, take two steps back – and go watch a wolfman movie, for Pete’s sake.)

But Moonie’s outfit was so striking that fans embraced him, pointy quarter-moon-shaped shuriken and all, and he was re-imagined with enough depth to headline a series. In his new iteration, Moon Knight was secretly soldier of fortune Marc Spector, who had been saved from Certain Death by the Egyptian moon god Khonshu, who granted him greater strength and whatnot to be an avatar for justice.

Or did he? Frankly, Spector is not a reliable narrator, because he’s clearly not wrapped very tightly. For one thing, he has four personalities, echoing the four phases of the moon. In addition to Spector and Moon Knight, he also spends time as cabbie-with-a-dark-past Jake Lockley and bored millionaire Steven Grant. That latter personality gave rise to the popular idea that MK was simply answering the question, “What if Batman had multiple personality disorder?”

But really, he’s his own, unique character. One who is certifiable. Ms. Marvel mixed superheroics with schoolwork in her first series in 2014.

Up next is Ms. Marvel, absolutely the most adorable Marvel hero this side of Squirrel Girl. The show stars the current holder of this title, Kamala Khan – who is the fourth to do so.

Two of those title holders aren’t important, but the first one is. Believe it or not, the first Ms. Marvel was Carol Danvers, before she went full legacy with the name “Captain Marvel.” And a young Pakistani-American teen named Kamala Khan, who lived in Jersey City, New Jersey, idolized Carol Danvers.

So when Kamala discovered she had size-changing and shape-shifting powers in 2013 – turns out she’s an Inhuman – she immediately adopted Carol’s old nom du combat “Ms. Marvel.” After all, Carol wasn’t using it any more. Kamala came up with a Captain Marvel-inspired costume, and now cuts study hall to patrol the mean streets of Jersey.

But unlike Peter Parker, Kamala tackles all of her challenges with sunny optimism and a can-do spirit. If there’s a Marvel book that can be described as “charming,” “Ms. Marvel” is it. 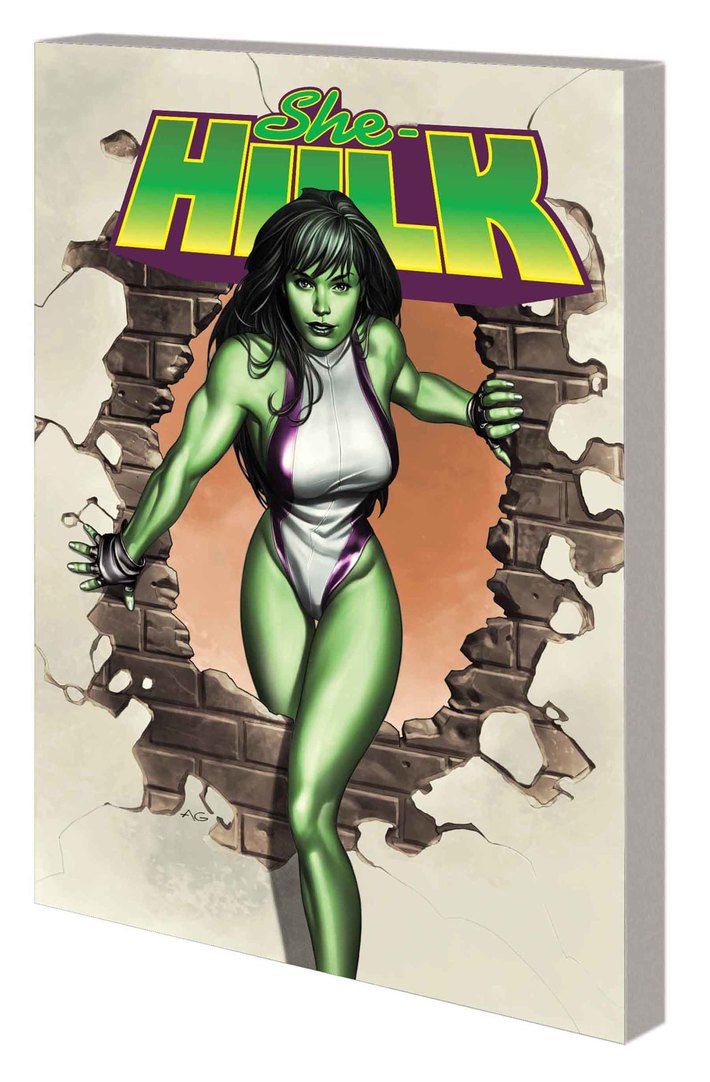 Finally there’s She-Hulk. You’d think the title was self-explanatory, but it’s not.

Jennifer Walters was introduced in 1980, a cousin of Bruce Banner who was making her way as a young lawyer in New York City. In circumstances too contrived to repeat, she received a blood transfusion from her cuz, and BAM! She suddenly started turning mean and green when stressed.

But gender-swapped Hulk was just the first phase of Jennifer’s career. In later iterations she had full control of herself when Hulked out, and she stayed that way most of the time. The shy, repressed Jennifer loved being, the bawdy, unapologetic “Shulkie,” who relished being superhero, lawyer and celebrity all rolled into one. When not beating up supervillains, serving on Avengers monitor duty or filing briefs, she was dating movie stars and partying at famous clubs – a world far beyond anything mousy Jennifer had ever imagined.

Later iterations went full comedy, with wacky plots and a lead character who frequently broke the fourth wall. “If you don’t buy this book,” she says to the reader on the cover of the first issue of “Sensational She-Hulk” in 1989, “I’m gonna come to your house and rip up all your X-Men!”

A more recent version of Jennifer turned gray and savage, but it came and went without leaving much of an impact. It is the joke-cracking, super-sexy, fourth-wall-breaking version that most people remember fondly, and at a guess that’s what we’ll see on Disney+.

Those three are in addition to, of course, the four shows already announced for the streaming service. D23 didn’t add much info, but here’s what we know:

The Falcon and The Winter Soldier will follow the adventures of Sam Wilson (Anthony Mackie) and Bucky Barnes (Sebastian Stan), now that the Avian Avenger is carrying Captain America’s shield.

Hawkeye will star Jeremy Renner from the movies, who will be training his replacement, a yet-to-be-cast girl named Kate Bishop. That scenario is loosely based on a 2012 series, wherein the Avenging Archer is something of a screw-up at everything except superheroing, and teen protégé Kate is forced to be the grown-up in the relationship. How that can apply to the non-smiling Clint Barton of the movies is yet to be seen.

Loki stars the irrepressible Tom Hiddleston as the Norse God of Mischief, as he essays Loki 2.0, saved from Thanos by the creation of an alternate timeline in “Endgame.” Where, when, what and occasionally who are all very good questions about this show.

WandaVision is inevitably described by all involved as “strange.” Riffing on elements of the 1982 Vision and Scarlet Witch miniseries (where the pair of Avengers are young marrieds in suburbia) and the 2013 Vision series (in which the Avenging Android lives with an all-android family in, once again, the suburbs), the series will somehow be set in the 1950s, before Wanda (Elizabeth Olsen) was born, and Vision (Paul Bettany) was created (and killed). Teyonah Parris joins the cast as a grown-up Monica Rambeau, whom last we saw as a child in the 1990s-set Captain Marvel. And all this will lead, somehow, into the Doctor Strange in the Multiverse  of  Madness movie. Y’know, I don’t think “strange” quite sums it up.

In addition to Marvel bombs, Disney popped some Star Wars firecrackers. The Mouse dropped a trailer for The Mandalorian, launching with the streamer Dec. 12. The other big news was the announcement of an Obi-Wan Kenobi miniseries, starring none other than Ewan McGregor.

Yes, it caused a great disturbance in The Force, as if millions of voices suddenly cried out in wonder and were suddenly silenced by choking on their Slurpees. I was one of those voices, and I hope you were, too.