Daredevil and Iron Man: Together Again?

There was an unusual announcement in the Bullpen Page announcement that as of next month Daredevil and Iron Man were going to be combined into the same book, possibly as a split book.

It was odd, as it seemed to come out of the blue, and at a time when Marvel was jumping the price of their books up to 25 cents.

But the change never happened.  That is, the two heroes separate books continued separately.

However, just recently, I was flipping through the covers of Marvel Super-heroes, a reprint book that had variously run the original Avengers and X-men, Sub-Mariner from Tales to Astonish and Daredevil and Incredible Hulk.

But at some point, it would appear that both Iron Man and Daredevil were being run together in reprints.

Could it be that this was the pairing that Marvel's Bullpen Page had  intended in their announcement?

Who knows the story behind this?

Note that the earlier monthly data records preorders, and the later data final orders. Also, after a certain point the data is all Diamond data. Also, it's sometimes the case that a particular issue is reordered in significant numbers in a month after its debut month (usually, the next month). When that happens the reorders appear in the list/s for the subsequent month/s. This factor doesn't usually make much difference to the issue's sales picture, but my recollection is it really did with Civil War.

...Frankly , perhaps the legal issues of (I believe) Blackhawk being liscenced by DC then prevented a Giant !

Also , while typing this , it occured to me that , even in the 60s , the issue of the old representation of Chop Chop as comic relief in Blackhawk in the earlier years , even in the Sixties , may have made many , anyway , pre-DC 'Hawks stories unreprintable...Which I remembered after thinking that perhaps a fairly large number of Qualirty 'Hawks stories were too Code-problematicic , or , even , problemactic for DC's own  internal standards & practices , even if they could pass Code muster...Too many WWII and Korean War references ? ( Though of course DC published umpteen ones of those . ) A little too much emphasis on killing people , or film noir/femmes fatale-style situations ? Perhaps too much emphasis on Communist villians/Cold War set-ups ? DC tended to stay away from that , I've meant to write about that , by comparison early Marvel fairly strongly used " Commie rats ! "  :-) .

...Okay , I see now  that one of the Archies Archie covers that were linked to did show a three-man Archies , though in psychedelic-y garb...A transitional cover I suppose , perhaps even because afive person Archies would have crowded the back part of the cover , where they were standing , and since B&V would've been members , required a lesser two character up front delivering the gag ??? I do sometimes answer things from a part in the middle of a line before reading all the way to the end , I admit...

It does show them as a three-man band , in matching " preppy " suit-lets .

The story style is referred to by GCBD as " surreal " - also , as influenced by the Beatles' HELP! and the Monkees' TV series .

There are many 50s Blackhawk stories which have Cold War set-ups, but also many that don't, so DC could have found suitable stories without using the Cold War ones. Also Blackhawk stories from the later 50s aren't very violent, unlike the WWII ones, and in the latter part of Quality's run Chop-Chop was toned down. However, DC may not have had access to Quality's production materials. On the other hand, it took the series over in late 1956, so in the early 60s there were DC Blackhawk stories that were several years old.

Yeah , BTW , I think , anything else aside , there was some technical advance in the early 70s that made reprinting from Golden Age comics far easier than before , DC started having loads of them during the great " adless " 100-Page Super-Spectacular year :-) !!!!!!!!!

With the issue cover-dated for Jan. 1957. DC Indexes says it went on sale in November 1956, which is to say a bit under four months after Showcase #4.

Or the Prize pick-ups DC made about then , too ???

Not with Blackhawk (which I think DC initially licensed), nor really with G.I. Combat (it apparently skipped a month, but by doing so brought its cover-date in line with Blackhawk's; that is, it didn't skip a cover-month), nor Robin Hood Tales (a bimonthly). Heart Throbs was only continued by DC from February the next year.

The Prize titles continued by DC were Young Love and Young Romance. DC took these over in 1963. DC Indexes doesn't seem to have on-sale dates for these titles. They were both bimonthlies before and after switching companies. In terms of cover-dates Young Romance continued on the same schedule, Young Love shifted from a Feb.-Mar./Apr.-May etc. schedule to a Jan.-Feb./Mar.-Apr. etc. one. I'd guess DC did shift its schedule, but logically it could instead be that DC adjusted how it was cover-dated.

I got the information on which titles were continued by DC from Wikipedia's pages on Quality and Prize.

Fred Thorpe: “Oh no! The Frankenstein Monster has grabbed Bobo! Rex can’t get to him in time!”

Rex (thoughts): “This is my chance to prove I’ve still got what it takes! But how can I save Bobo from the Frankenstein Monster?”

Caption: “Can even Detective Chimp and Rex the Wonder Dog stop the rampaging monster? Find out inside in “WHEN TITANS CLASH!””

One thing that I'm surprised no one has mentioned: if the announcement of DD and IM sharing a book was made in 1971, it very well may have been meant to be a team-up book.  The year before, DC put Green Arrow with Green Lantern, to much critical acclaim. 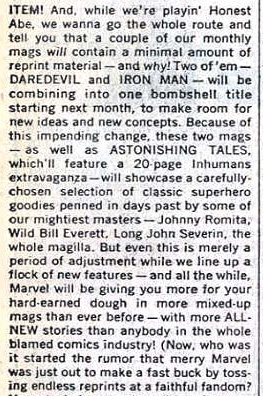 if the announcement of DD and IM sharing a book was made in 1971, it very well may have been meant to be a team-up book.

To get this discussion on more solid ground, I hunted up the November 1971 Bullpen Bulletins page, and here's the item.

I cut off the last sentence that continues into the next column, as there was no way to crop it to put it in. It ended "(You stuck by us when the going was roughest, Stalwart One--and we're betting you'll like the reward we've cooked up for ya!)"

The key point is that it doesn't simply announce the book, it was used to explain why there would still be some reprints in books, this being one. It sounds like the DD-IM book might have been a new IM story and a DD reprint one month and vice versa the next.

That's pretty weird, but if it was a team-up book, I think Stan would've mentioned it, as that would be big news.

But it also doesn't sound like the reprints were necessarily DD or IM stories, based on those artists (although some of them did work on DD). I'm not sure they had many stories from either of those that would fit a backup spot.

OTOH, maybe it was going to be 10-page DD and IM stories, with an additional reprint. Holy Mort!