Bernthal was good in Walking Dead but I'm not crazy about him playing the Punisher. Looking forward to Season 2 though.

NEW POSTER - ALL THREE IN COSTUME 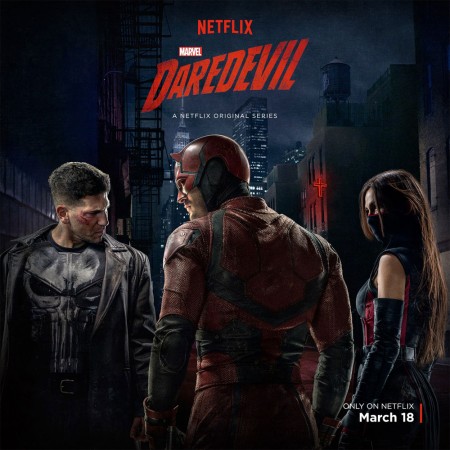 The second season of Daredevil is available in its entirety NOW!

Enjoyed the first two episodes tonight. The Punisher was onscreen so briefly that I can't tell about the casting.

They did, finally. In season one it seemed like Foggy was on his birth certificate.

Saw the first three episodes so far. Got a kick out of Melvin holding a circular saw blade. Will he be the Gladiator in season 3?

I'm a few episodes in and enjoying it so far.

I had doubts about Bernthal as the Punisher, but I think he did a bang up job.  He could easily carry his own series.

The fight scenes on this show are probably the best I've seen anywhere.

Yesterday we finished the last of season two. As expected, they did a good job. The inclusion of an unannounced guest villain was much appreciated.

My eyes tend to glaze over with too much ninja action, but they do it better than the Arrow show.

When you get to the 13th episode don't miss the brief Luke Cage teaser trailer.

ELEKTRA: The changes made to Elektra’s back story seem a little off to me. In the comics, the college-age Elektra was dangerously wild and maybe a little self-destructive, but she wasn’t a criminal, a killer. I’m also not too wild about the insertion of this “Black Sky” stuff or the idea that Stick called her “Elly” as a child. Having said that, though, the casting was much more appropriate than Jennifer Garner.

I’m a little bit disappointed in the brevity of the season two discussion (especially in comparison to that of season one). I suggest we make a concentrated effort to do a better job on season three.

I think I watched this later than most, and wasn't here for this discussion. But, yeah, I was pleasantly surprised by how good Berthal was as Punisher, and I hear the PTB agreed and there are plans for a solo Punisher on Netflix.

This Elektra was different than the one in the books, in that she was homicidal in the beginning of her relationship with Matt. That actually makes more sense to me; the way they broke up in the comics in college wasn't terribly convincing (at least to me). The TV version of the character actually improves a bit in the course of her life, which is a much more hopeful story than the comics, where she goes from young and naive to remorseless killer. I like the TV version better.

And I agree that the actress looked more Greek and Elektra-like than Jennifer Garner. OTOH, she was so incredibly thin I sometimes found her strength and endurance implausible. Eat a sandwich, girl!

I'm of two minds about Scott Glenn as Stick. He looks the part, but sometimes I find his line delivery one-note and a bit over the top. It feels like he's phoning it in, or thinks he's in the 1966 Batman.

Do I need to mention Rosario Dawson remains awesome? Didn't think so.

I really like the central trio. I don't know where this Cox fellow came from, but he nails Matt. Foggy is terrific; in the comics you sometimes wonder why Matt keeps him around but here he's really the heart and soul of the trio. The script rarely gives Karen anything to do but look terrified and/or worried, but when she gets some beef she knows what to do with it. The chemistry is great, too, with the whole being greater than the sum of the parts. Despite the script really giving these people no reason to like each other, the actors don't make you question it too much.

I hated the initial DD helmet, but it's gotten smaller and less comic-booky. Still, a chin-strap or some nod to reality would make it work better for me.

Hey, Jeff, who did you like Frank Castle's battle in the prison hallway? I think I forgot to breathe through the whole thing.