Days of Hate: Act One 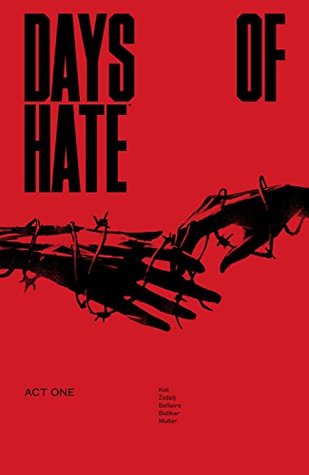 The title of this maxi-series says it all. Set in the United States in 2022, it depicts a country where the current swing to the right has gone all the way into fascism. There has been a civil war, leaving behind a violent alt-right (as they prefer to call themselves), and a Special National Police Unit for the Matters of Domestic Terrorism (head investigator Peter Freeman says "I hunt enemies of the State").

The story centers around two ex-lovers. Since their divorce both women appear to have gone in opposite directions.  Amanda Parker has become radicalized, and is on the run with her partner, attacking fascist groups all over the country.  When she is being interrogated by Freeman, architect Huian Xing says she blames her ex for the failure of their relationship and the loss of their child through a failed pregnancy.

There is a great deal of expository dialog about the state of the country and its politics, which has the potential to be a little too much like the actual daily news. But it is not so heavy-handed to impede the action. Much of that is provided by Amanda. Huian's role is more complex: is she really cooperating with the government to catch Amanda, or are they both executing a shared plan?

I'm a longtime fan of artist Danijel Žeželj (mainly from Vertigo titles like Luna Park and  El Diablo). His dark, atmospheric style is very well suited to this story, aided by Jordie Bellaire's impressionistic color palette. His dramatic character designs and panel layouts enliven even the talkiest pages, and the script makes frequent use of his skill with wordless pages. So I have no doubt that the second and final act will be visually striking, and look forward to the political resolution.

Permalink Reply by Wandering Sensei: Moderator Man on November 30, 2019 at 9:38am

Thanks for the reminder of this series. I had forgotten about it, honestly. I think I read the first two issues, and then trade waited, and then sadly forgot about the trade.

I also am a huge fan of Danijel Zezelj. It was always a special thing when I would find his art on a random fill-in or short story in Vertigo, and then also, as you said, Luna Park and El Diablo. He also did a Vertigo Congo Bill miniseries--can't remember whether it was called Congo Bill or Congorilla, but it is an overlooked gem of his works.