(And apologies for the pedantry above. I like to take deep dives into stuff like this, but I'm sure if I hadn't thought of that title, I never would have gone down this rabbit hole.)

From all accounts, Adolf Hitler was a frustrated artist. Instead of killing him in his crib, why not time-travel to give him some art lessons?

That's probably a better approach. I'm sure there are SF stories out there where someone does just that. 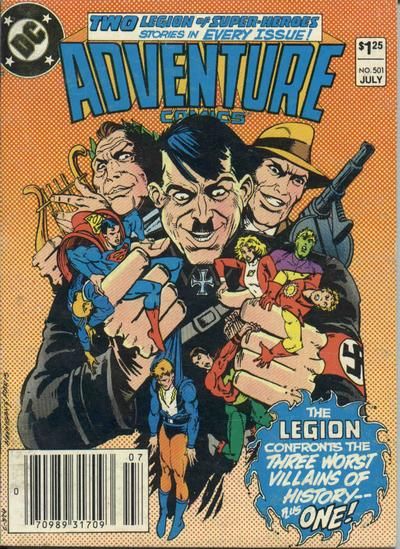 It's no surprise that a legionnaire would think of Hitler when wanting the name of a bad guy.

It was established long ago that, by the time of the Legion, the three worst villains of all history are considered to be Adolf Hitler, Nero, and John Dillinger!  Would you rather that Cham referred to "Baby Nero" or "Baby Dillinger"?

Actually, that would have been funny, and a nice (and very obscure) nod back to previous versions of the Legion!

Ha, that's right! I'd totally forgotten about that! Baby Dillinger would be the best!

Of course, it's always been odd that Dillinger gets such a bad rap even in the future. I've read a few books about him and he wasn't as outright evil as, say, Al Capone or Bonnie & Clyde.

I guess "Baby Bin Laden" or "Baby Weinstein" is too soon by our pov!

Yep, both probably  too soon. But also, Hitler doesn't *just* say evil. It says a type of fascist, authoritarian evil that Weinstein or Dillinger don't represent.

And Dillinger IS a really weird one to be one of the three most evil people in history, even at the time that story was published. I agree... Capone would be a much better choice! Maybe the artist had better reference for Dillinger? Maybe Capone had just shown up in another Superman book? Or maybe Dilinger's rep was worse then than it is now. There are so many hidden reasons for why things turn out the way they do.

That is one loooong period of peace in there if those are the three baddest in history!

I personally want to award Rob a No-Prize for his Interlac explanation, by the way! Who knows what baddies have inhabited the Earth since 1945, but we just had it translated to 21st Century English. All I know is that Damian has some bad reputation--but I think the fact that the Bendis version broke down and gave Superboy a hug before he rushed off to space tells us that this isn't the same timestream.

I haven't read this issue yet, so I'm flying blind.  I assume that Gim is Gim Allon/Colossal Boy.  He seems to be an odd choice to not know who Hitler is.  Of all the Legionnaires one would expect him to know.  It has long been established that Gim is Jewish.  What is Bendis saying by (possibly) implying that the Jewish people have forgotten who Hitler is.

Of course, I haven't read the issue yet, so this character may have very little to do with the Gim Allon of past incarnations.  But it still seems odd to (possibly) jettison one of the key aspects of those Gim Allons.

I admit that the Baby Hitler line is a little jarring for the reasons you suggest. There's a lot of history between the 1940s and the 31st century. And yet I'm not sure if there's a better choice. Allow me to explain, in a short essay I should never have called...

IN DEFENSE OF BABY HITLER!

First of all, let's look at what the line is, and what it does. Dawnstar thinks Damian might have been Cham, pulling an "earth-tribe" joke. Cham says, "What kind of joke is THAT? "Look at me, hey! I'm Baby Hitler!"" I would NEVER do that!" And then Gim asks, "Baby Hitler?"

The line is brief, it's funny and unexpected, and it tells us something the Legionnaires know about Damian's future.

I don't think you can beat Baby Hitler in brevity. If Hitler is a modern metaphor for evil, Baby Hitler is a widely known time-travel trope for evil before it starts. Sometimes people in our time use Stalin or Pol Pot as substitutes for the evil metaphor... but when it comes to traveling in time to kill a baby  before he becomes evil, that's pretty much all Hitler territory. Those two words say a lot.

And perhaps there's someone in the next thousand years who was even worse. I think that's likely, considering that, after all, the Earth blew up! But we wouldn't know his name -- even if the name Bendis gave to the villain was self-explanatory, like Snargoz the Treacherous, we wouldn't have any context for it. We wouldn't know what he did, or when he did it -- for all we'd know, Snargoz might be someone we'd be expecting to see in the future issue. We don't have those expectations with Hitler.

As for the humor: While we might get some humor with Snargoz, it's all about his name; we don't have context to make anything else about the situation funny. But Cham's exasperation with someone thinking he'd pretend to be Damian as a joke is clear with the Baby Hitler reference.

Another thing: It's a busy enough book as it is. Why waste exposition on Snargoz if he's not going to be an issue? Hitler needs no exposition.

Also, Gim's response -- "Baby Hitler?" -- suggests that knowledge of Hitler isn't necessarily as universal in the 31st century as it is in ours. But I think we can assume that there are a number of people in the Legion who've been studying the 20th and 21st centuries, considering they just went there to induct Superboy. Maybe Cham chose Hitler for his comment because he thinks of Damian and Hitler as relative contemporaries. (We see earlier in the issue how excited Dawnstar is to meet Superboy, because she sees him -- a 21st century kid -- as a link to her people's 13th century earth origins. So "contemporary" is a pretty wide net from a millenium's distance.)

Ultimately, though, I just wrote it off as this: Everything we read in this book is translated from Interlac -- not just literally, but also idiomatically. Maybe Cham said Baby Hitler. Maybe he said "L'il Snargoz," and it was translated to Baby Hitler for the sake of the 21st century readership. Like you said, the writer is from 2020, and so are we. And if he wants to make sure we know what's being talked about, I'm all for that. So much of this relaunch has been a guessing game, as we haven't seen a full roll call or been introduced to a lot of the cast. So I'm happy to have a baby Hitler to hold onto every now and then. At least we know where we stand with that guy.

Oh, VERY good point, Dave. You're right that I means Colossal Boy when I said Gim. I suspect that it's a result of me misinterpreting Gim's intention of the line, not Bendis's intention to retcon Gim's Jewish identity or to imply that Jews will forget Hitler in 1000 years. Another interpretation of Gim's line could be "Baby Hitler? Don't you think that's a little harsh?" All he says in the scene is "Baby Hitler?" so it's difficult to know for sure what he means by it. But the points you raise -- along with Bendis's probable awareness and sensitivity to those points, being Jewish himself -- are good indications that I was interpreting the line incorrectly.

Oh, absolutely. Me too.