I thought so, too -- assuming Tommy Tomorrow is a girl now. Is that new?

I think Tommy is the blond guy behind the desk. The girl is most likely the main character of the series -- the woman who walks through 1,000 years. (We don't know her name yet, but apparently she's in a book Bendis is currently writing -- someone who gets immortality bestowed upon them. Speculations have included Jinny Hex, Cassie Sandsmark, Rose Forrest, Manunter, and Metropolis fire chief Melody Moore, among others.)

If I may, some personal observations, based upon the last few posts on this thread.

I'm all for diversity, so have no problem with the new Matter Eater Lad, although I am wondering if the extra mass is muscles or weight.

Not too crazy about the fact that Dawnstar's wings are no longer "real", and Dream Girl now appears to be made of sand?

Shouldn't Blok's head be a bit more in proportion to his/its body?

And as for who the mystery woman is, my first thought was Naomi from Wonder Comics until I saw the recent images. If she is the lady pictured in the sample pages, it's back to Square 1 for me on that now. 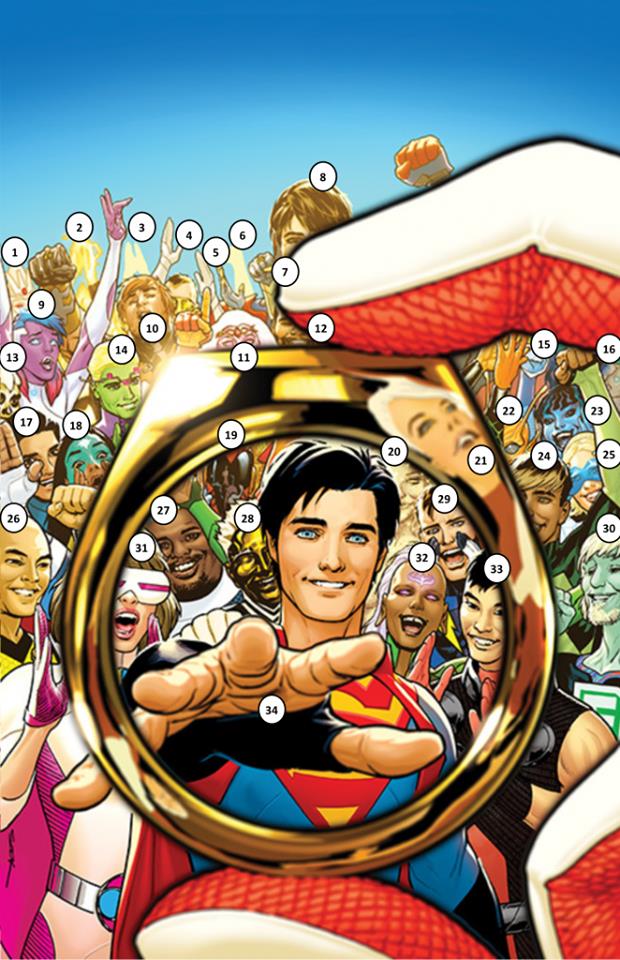 The ones I'm guessing at...

9. Shrinking Violet (the outfit was originally making me think Phantom Girl, but the skin tone...); 12. Bouncing Boy; 20. Sand version of Dream Girl; 26. Karate Kid; 31. Phantom Girl (maybe she needs the visor for better vision in our dimension?); 33. Cosmic Boy (it's something about the outfit that's making me change my original guess of Karate Kid)

But are we sure everybody pictured IS a Legionnaire?

If they're not, then I think between 27 and 28 you have a United Planets representative and R. J. Brande.

Could #28 be Polar Boy? With a touch of Stone Boy?

Here's what I've come up with. I'm going to bold the ones that have been officially identified in Sook's character designs.

1 White Witch? Projectra? She's wearing a crown, but the crown is shaped like a W. And she looks super pale.

3 Or are THESE Sun Boy's hands?

5 I see a hint of Gates's hood back there.

8 Colossal Boy. Or, as I've seen it speculated, Colossal Girl? Tough to tell with this picture, and very cleverly staged if so.

9 Phantom Girl. There's an unnamed design of this character, and it has a lot in common with Tinya's 70s outfit.

12 I see the hint of a beefy guy with a mustache -- it fits the named design of Matter-Eater Lad.

15 At first I thought that was a blue hand... but is that Quislet?

25 Light Lass, I suspect. Another unnamed character design is out there, and it looks like there's a feather on it.

28 Likely Star Boy... another character design without a name attached.

31 I'm also thinking she could be Projectra. Otherwise, I'm at a loss. Lori Morning?

32 I'm guessing Shrinking Violet. The design on her forehead reminds me a bit of the black filligrees on Vi's 70s costume.

Given the name, I always thought there should be a lot more than the 30 or so we know. This would be a good time to expand the roster with the idea that there are a lot of Legionnaires we never see, who are operating someplace other than Earth. Or that maybe there are a lot of non-powered Legionnaires who do day-to-day stuff that doesn't require calling in the big guns.

But that's probably not going to happen, even though it would be a great opportunity for increasing diversity. We'll see the same faces again. I just hope we don't get the same stories again, just updated with new technobabble. Do we really need to see Wilfire pining for Dawnstar again?

I'm hoping Bendis and Sook don't rehash every character beat, certainly. But I think, in comparison to other teams, a book with 34 members can be called a Legion by at least some definitions of the term. Heck, OMAC is a whole Army Corps by himself, so I'm willing to give them some artistic license.

Oh, and I've seen speculation that #4 is Invisible Kid!

For #31, wasn't one of the characters, either Saturn Girl or someone else, temporarily known as Visor Girl? Or am I making that up?

Visor Girl rings a bell... but I haven't been able to find anything by googling.

Lori Morning, on the other hand, would occasionally wear a visor in her identities... and used the H-Dial! She had a number of hero IDs, obviously, including Future Girl, Galaxy Girl, Slipstream, and more. Could be her!